We’re Dreaming of a Gray Christmas

For the last few weeks, we’ve been dreaming of a gray Christmas, but many birders have already had such a dream come true. 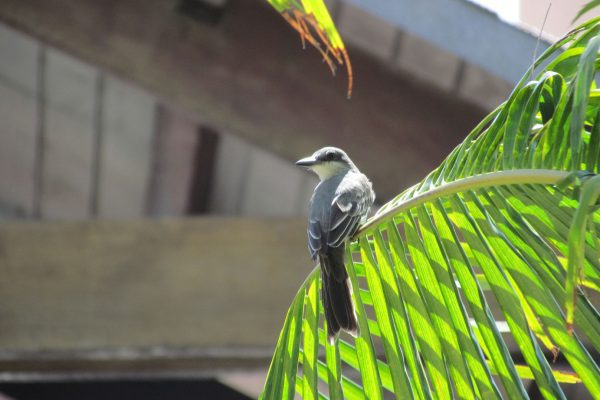 A Gray Kingbird was seen recently in Biddeford Pool – far from its characteristic Caribbean hangouts. (Photo by Jeff Wells)

On December 3 a Gray Kingbird was found near Fortunes Rocks Beach in Biddeford Pool, only about two miles from where another rare flycatcher, an Ash-throated Flycatcher had been found before that.

Gray Kingbirds are a classic Caribbean species. They do breed into southern Florida (rarely and occasionally along Gulf Coast states and north to coastal North Carolina) and south into northern South America. Like many in the kingbird family, they are noisy, brash birds. Their characteristic call is a loud, exuberant “peecherry” that becomes a defining background noise in areas where they are common.

Like all kingbirds, Gray Kingbirds in their native range are often conspicuous, sitting on the tops of palm trees and telephone poles. As their name suggests, they are light gray on the back, wings, and head but have a darker mask through the eye and a rather large, black bill.

Unlike those birders who buzzed to southern Maine to see this extremely rare-to-Maine species (hopefully many Natural Resources Council of Maine members among them), we have not been able to make time to do it, which is why our “gray” version of “White Christmas” continues to hum through our heads. 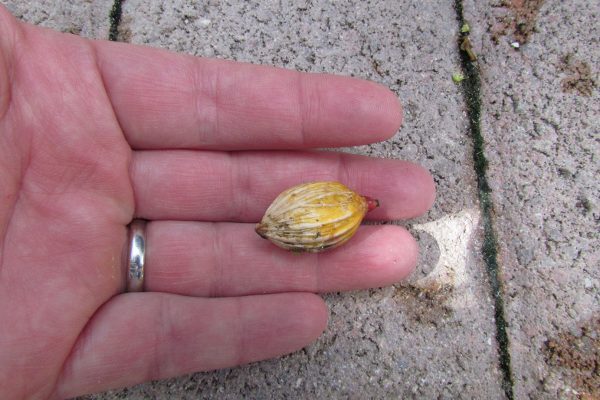 During one of their visits to Aruba, where the species is common, the authors saw a Gray Kingbird regurgitate the seed of a palm fruit. What is the Biddeford Pool bird surviving on? (Photo by Jeff Wells)

However, we have seen Gray Kingbirds many times. In fact, they are a favorite bird for us when we are visiting the island of Aruba. They are easy to see and hear, making their presence known around the grounds of the resort hotels. We have often enjoyed watching their antics from the refreshing confines of a pool on a hot afternoon during our stays on the island. You can read about them in our book, Birds of Aruba, Bonaire, and Curaçao: A Site & Field Guide, which, by the way, makes a great gift!

On one of our visits to Aruba, we noticed Gray Kingbirds spending much of the time around the tops of some of the palm trees near the aforementioned pool. As we floated in the warm, soothing waters, we pursued a relaxed study of the kingbirds. We were delightfully surprised to find that they were hovering over the small palm fruits, pulling them off, and swallowing them whole. Later we even observed one regurgitating the hard pit of the palm fruit after the soft parts had been digested.

On Aruba, from our experience, the numbers of Gray Kingbirds have increased since the 1990s when they were to be found at only one or two locations on the island. Now they are quite widespread. Are they expanding or increasing more broadly? No one knows because there has been no long-term historical regional population monitoring of most species outside of the U.S. and Canada. Perhaps that will change with eBird and the growth of more Christmas Bird Counts in Latin America as well as other organized surveys.

At the time of this writing, the Gray Kingbird in Biddeford was showing the resilience of the species and was still surviving in this place’s harsher weather, so far from the tropical climes where the rest of its kind are residing at this time of year. There won’t be any palm fruits, but perhaps it is finding some leftover rose hips, bayberries, or other fruits along with whatever insects it can glean from the wrack line that birders report seeing it hovering around.

As birders get ready for the Christmas Bird Counts coming up later this month, we are all wondering what surprising bird will be next. Maybe you will be the one to spot it!