Did you know there is an activity that you can do with 79,000 other people, all with the same common goal? Pro sports game? Going for a world record? No, it’s participating in a Christmas Bird Count! There were more than 2,600 individual Christmas Bird Counts conducted last year, 1,974 from the United States, 460 from Canada, and 181 from the Caribbean, Latin America, and Pacific Islands.

In case you are not part of the initiated (and we hope you are), each individual Christmas Bird Count is as a survey of all of the birds that occur within a fixed 15-mile diameter circle that does not overlap with any other count circle. The count must take place between mid-December and early January and, ideally, is carried out every year. Each count circle is divided up into territories, with separate teams covering their own section and counting all of the birds of each species that they can find, all on the same day. All the section counts are then compiled together into a total number of individual birds of each species for the entire count circle. 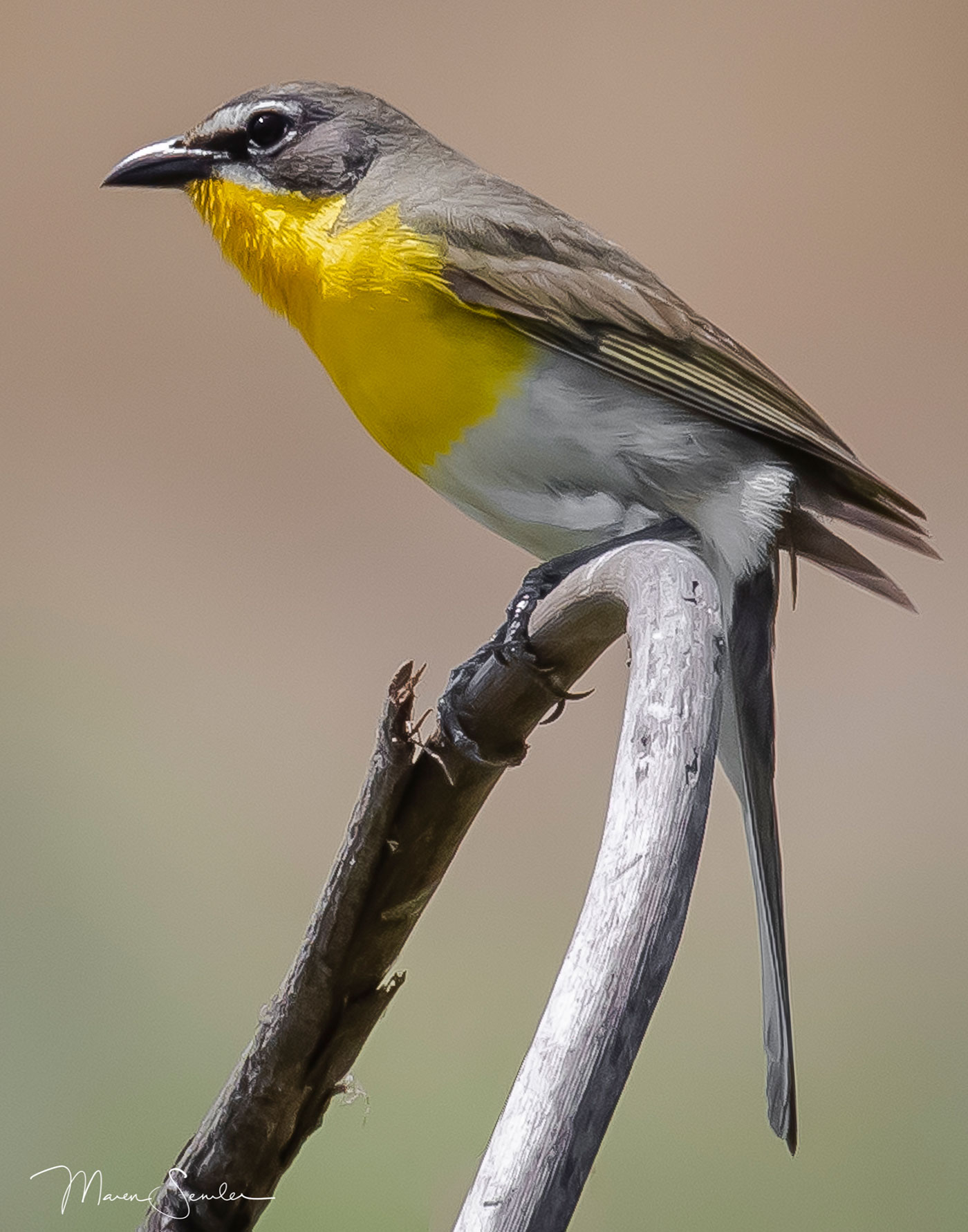 One of the many exciting things about Christmas Bird Counts is that you never know what you might see, like this unexpected Yellow-breasted Chat. (Photo by Maren Semler courtesy Wikimedia Commons)

The very first counts were started in the year 1900. Some Christmas Bird Counts have been conducted annually without fail for many decades. Not surprisingly, such a long-running and robust dataset has been invaluable in detecting changes in the abundance and distribution of birds, including studies that can help inform the work of the Natural Resources Council of Maine. Hundreds of scientific papers and reports have been published from studies using the Christmas Bird Count dataset.

All of that is great, but for most of us participants, the motivating force to participate is about something else. It may be the feeling of being part of a team of committed and like-minded individuals. It may be a sense of adventure in visiting a new place or a difficult-to-access area. Or the thrill of competition to see which team can find the most species or the most unusual bird or a new bird for the life list (the list of species a person has seen in their lifetime). Most often, it is a little of all of these things, perhaps with the anticipation of an end-of-day dinner with friends to share stories of the count. 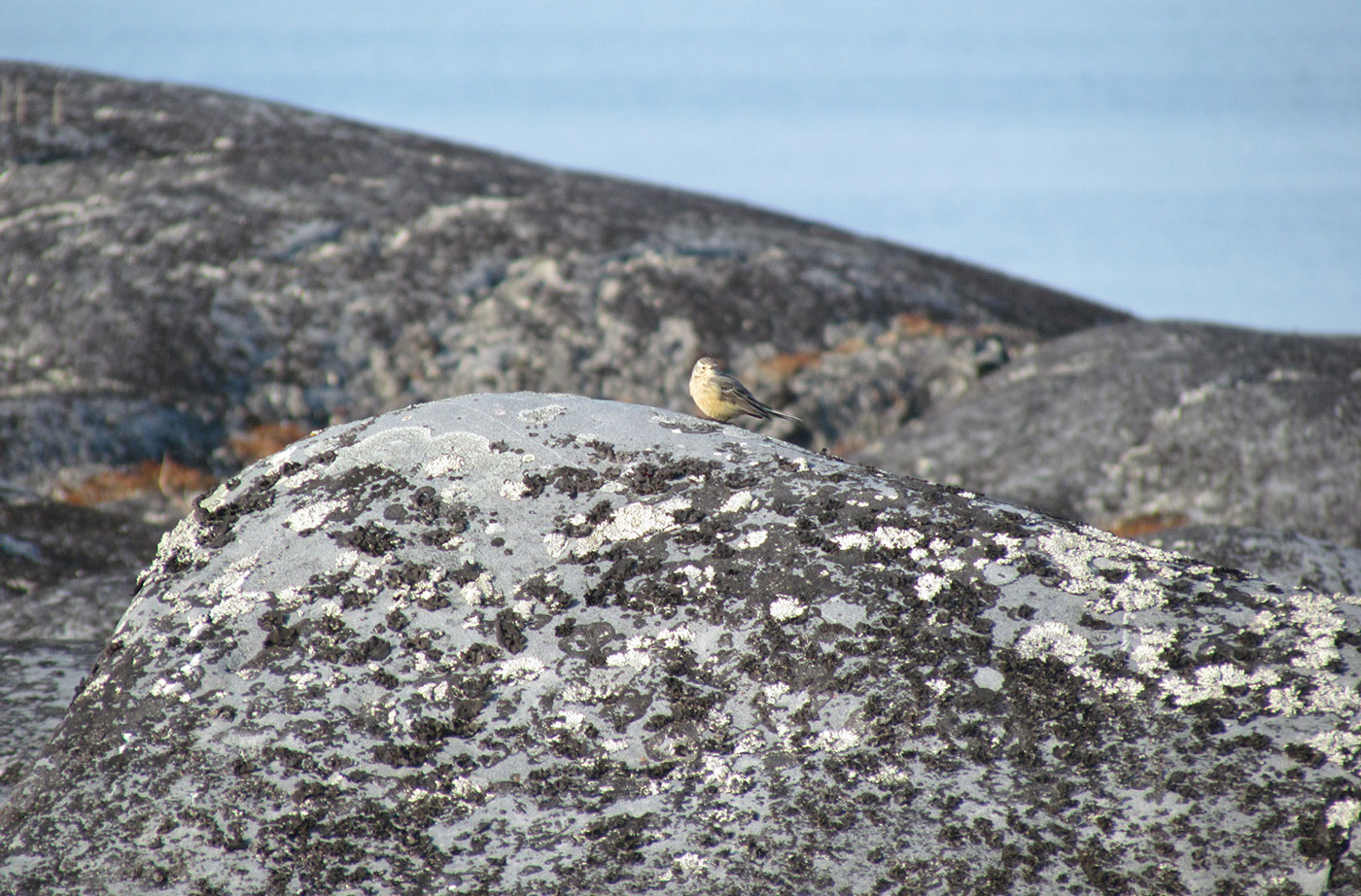 American Pipit, seen by the authors on a southern Maine beach during Christmas Bird Count. (Photo courtesy of Jeff Wells)

We have fond memories of dinners in warm, cozy living rooms after being out from before dawn on bitingly cold counts, waiting with anticipation to learn what interesting birds other teams had found and sharing with the delight our own unusual finds—perhaps a lingering Yellow-breasted Chat at a backyard feeder or a very late American Pipit among the wrack on a sandy beach. There was the lunchtime get-together that was traditional on the Orono-Old Town CBC where two birders came in trembling after helping pull an accident victim from a car just moments before it exploded. They somehow managed to continue counting birds that day, and weeks later they received awards from the local fire department for their bravery.

On the Schoodic Point Christmas Bird Count one year, the always-adventurous duo of the late Norm Famous and Bruce Barker returned with a story about having to wade through frigid ocean water that had covered their return route from a small island connected by a natural causeway. They had been so engrossed with birding on the island that they hadn’t paid attention to the rising tide. They sported slippers the rest of the day because their sodden boots were unwearable.

One night on our way back from the Misery Christmas Bird Count near The Forks, we met the other participants at a small-town restaurant. It had been an exceedingly cold day but we had been warmed by sightings of northern specialty birds like Canada Jays, Boreal Chickadees, and Black-backed Woodpeckers. Still, our disappointment was keen when we learned that friends counting along the road to Harris Station Dam had found several exceedingly rare Great Gray Owls just before dark. How we wished we could have found one in our territory!

Memories like this are what pull people into returning year after year to keep counting the birds on Christmas Bird Counts. And what an extra bonus to know that, together, all of us counting this year and those that counted in decades past are all part of a massive collective social event that tracks the health of the birds we love to observe. If you haven’t joined the Christmas Bird Count tribe and you want to, check out the National Audubon website to find a count you can be a part of at: www.audubon.org/conservation/join-christmas-bird-count.

Find a Christmas Bird Count near you!