We all know birds are clever. How they manage to build those beautiful nests, for example, or find their way during migration are questions posed by poets and prophets—and scientists—for centuries. The more we watch them, the more we find out just how clever they are. 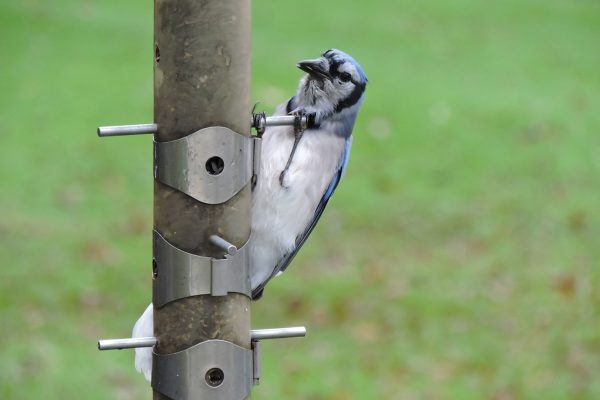 Mom Wells is an enthusiastic feeder of birds. Her feeding station at her home in Damariscotta is always busy, providing her with ample opportunity to observe clever bird behaviors. A recent observation inspired her to snap a few photos, which she shared with us as proof of what she described to us over the phone: Blue Jays doing pull ups.

Blue Jays, like their close cousins the crows and ravens, are birds we all probably recognize as being particularly clever. Mom Wells noticed one day that the Blue Jays in her backyard had figured out a way to access the sunflower seeds in the tube feeder. They were too big to perch on the pegs and dip into the seeds from the adjacent openings. But determined not pass up a chance for a free meal, they figured out that they hung on the horizontal rods in a particular way—the way us humans do pull (those of you who do pull-ups, that is!) and wedged their tail against the feeder, they could poke their bills into the opening and take out the seeds. 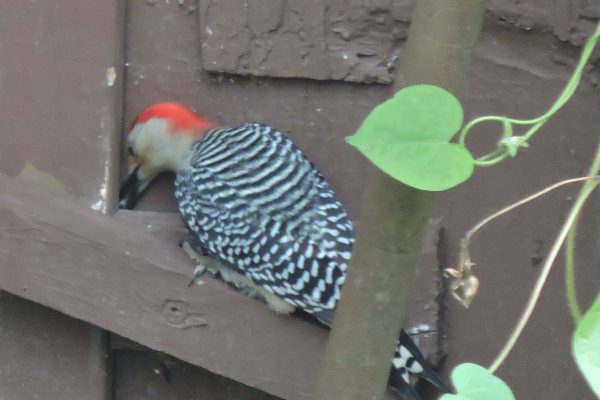 Mom Wells’ resident Red-bellied Woodpecker likewise was not about to let free sunflower seeds get the better. As Mom Wells looked on, to her surprise the bird discovered a nook on her shed door where it could place the seed and hammer at it to get the juicy nut meat out of the shell.

Mom Wells’ photos got us to wondering if there might be a few photos in the NRCM Digital Asset File that likewise featured birds showing off their ingenuity. 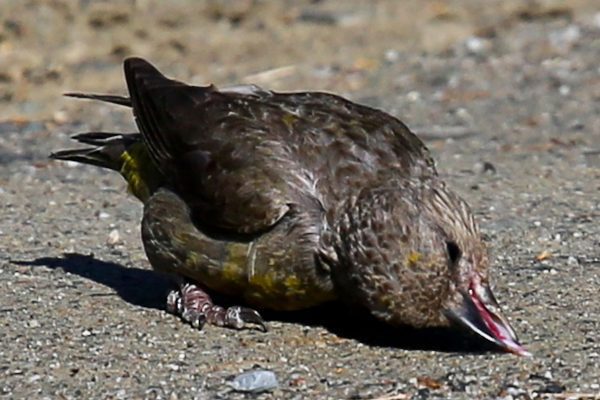 It didn’t take long. David Small, a regular contributor to the Natural Resources Council of Maine’s “My Maine This Week” photo feature captured a fascinating shot of a Red Crossbill doubling as a contortionist in order to pick grit or salt from the ground. If you’ve seen the bill shape of this species (they are called “crossbills” for good reason!), you’ll understand why such a move deserves applause.

And how many times have you seen woodpeckers hanging upside down and every which way in their (usually successful) attempts to get a chunk of suet from a suet feeder? They prove that Blue Jays aren’t the only birds that can do pull ups! 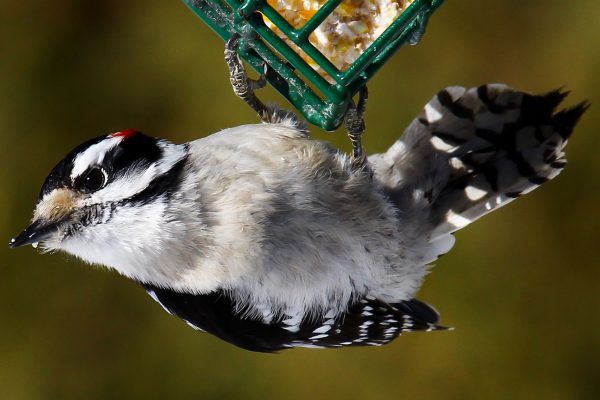 One of the famous stories of learning in birds was initially noticed in the first half of the 1900s in England. Back then, milk was delivered in glass bottles with foil tops to doorsteps in the early morning hours. When the home’s occupants came out to pick up the milk, many made the unhappy discovery that someone—or something—had pierced the foil and consumed much of the cream at the top. A little detective work found that the culprits were chickadee-like birds called Blue Tits. It was thought to be a behavior that birds learned from each other. This would explain why this clever trick eventually came to be seen in this species across much of England. In modern times, some researchers questioned whether the birds learned this behavior by watching other birds and suggested that all the birds independently had come up with the same behavior through trial and error. One skeptic of the original observational learning idea even tried a simple experiment with Black-capped Chickadees that seemed to support the notion.

But a few years later a more sophisticated experiment with Blue Tits confirmed that birds do indeed watch and learn new behaviors from each other. In the experiment, some birds were held in captivity for a period of time while they learned a way to manipulate a puzzle in order to get food. Some birds learned to do it one way; another set, another way. The birds were then reintroduced to their wild flocks along with the food-reward puzzle. Although the puzzle could have been solved in either of the two ways, the birds in the flock solved the puzzle only in the way that their trained flock mate had learned to solve it.

Given fascinating behaviors like these, and the idea that birds are probably always learning more, it’s no wonder so many of us enjoy watching them!