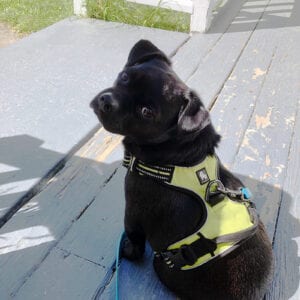 The authors recently adopted Loki, who is always ready for a walk through the neighborhood. (Courtesy of Jeff Wells)

Dogs change things. Since recently adopting one into our family (joining the ranks of many Natural Resources Council of Maine colleagues), we now have a dog snuggled at our feet if we’re working at the desk, cuddled on or near our laps if we’re watching the NBA playoffs (go, Hawks!), and curled up on our bed through the night, presumably dreaming about cottage cheese.

Loki, an adorable and adoring Chug, loves to walk. He clocks three or four walks a day around our neighborhood. We used to think we knew the birds that shared our extended grid with us pretty well. But we have been amazed at how much more we’ve learned about them since Loki joined our clan.

Like most dogs, Loki doesn’t just walk, he sniffs. He stops to inspect whatever peaks his doggy fancy (at least, what we allow!). He must make sure he points out every chipmunk and squirrel scrambling up ahead in the road or in a nearby tree. He loves to greet other walkers, and especially their dogs, if the dogs are so willing. One of his favorite things is to slip just off the sidewalk onto the gloriously unmown parcel of lawn at one of the houses along one of our routes and let the long grasses brush across his face. 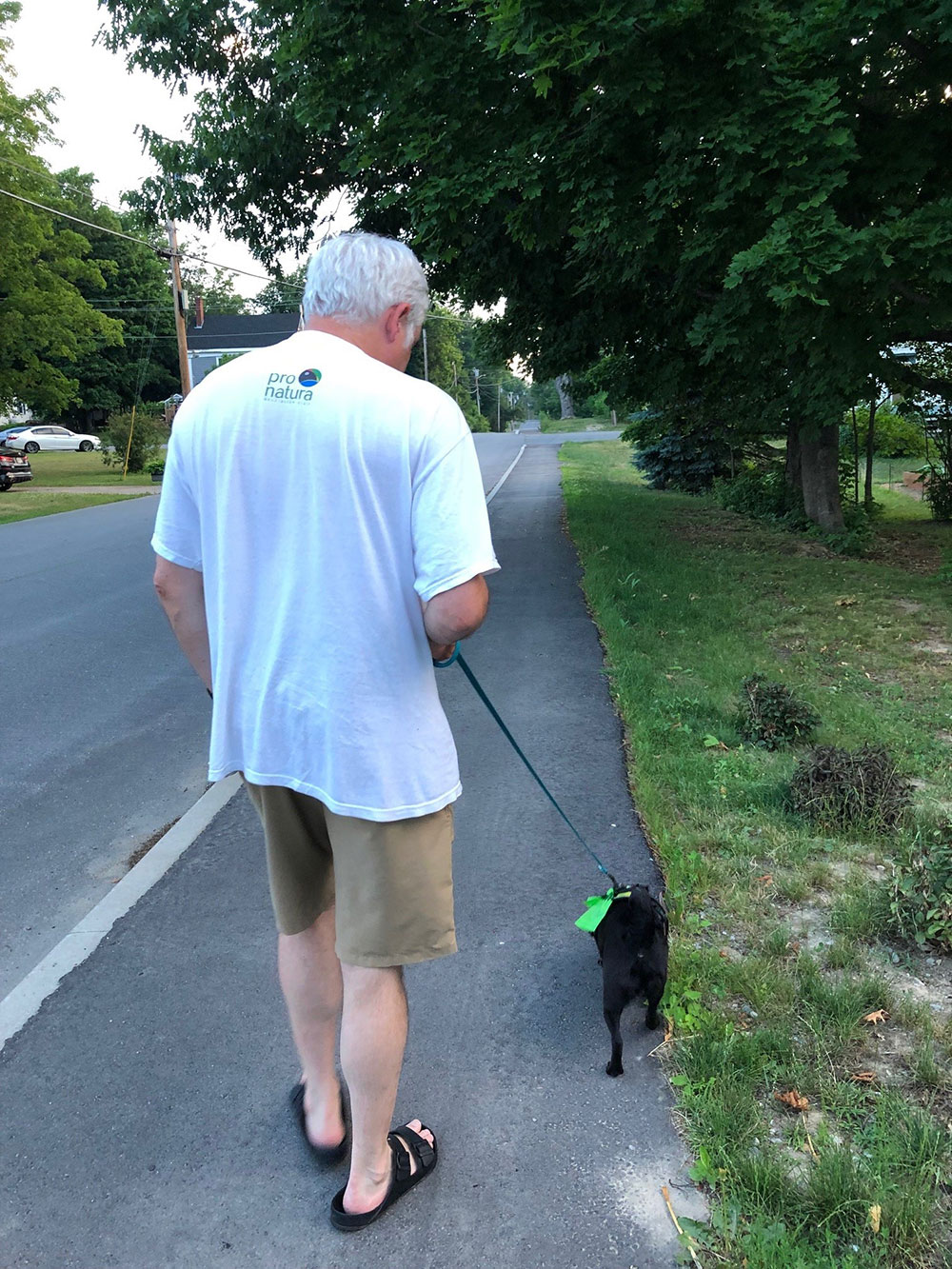 Walking Loki around our neighborhood

Whether we’re walking or stopping to accommodate Loki’s discoveries, we keep our eyes and ears tuned in to whatever birdy thing is happening nearby. From these neighborhood walks, we can say with certainty that we have two families of House Wrens within two blocks of our house—something we weren’t quite sure of previously. We’ve logged more than half a dozen robin territories, and a single Carolina Wren that seems to roam around daily from one backyard to another, belting out his rollicking “teakettle, teakettle, teakettle” song or some variation of it just about every time we walk. There’s a small flock of pigeons that are always on the white house three blocks down, and one uniquely patterned individual is almost always on the telephone wire when we go by there. Two houses appear to be hosting House Sparrows—we often see them going into holes in the siding where they must be feeding young.

In recent weeks, we’ve noticed at least three families of recently fledged Black-capped Chickadees; the young birds give their wheezy begging calls while the adults search for insects to feed them. There have been young robins, too, with their spotted breasts, loudly and hungrily following around their parents at several neighborhood spots. 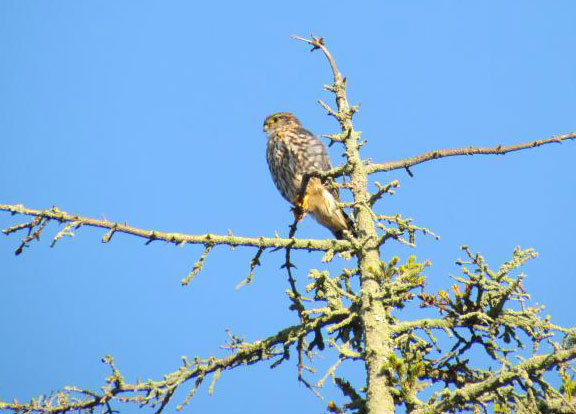 While walking Loki one morning, a Merlin zoomed by and landed in a tree in our neighbor’s yard—a sight we may have missed had we not been walking the dog. (Courtesy Jeff Wells)

One morning as we walked with Loki we heard the local starlings giving their alarm calls as they often do when they spot a bird-eating hawk in the area. We scanned the skies and sure enough a Merlin—a small falcon that specializes in eating small songbirds—came zipping by and perched in the top of a tree over a neighbor’s house, likely looking for food for its young in a nest somewhere not too far away.

This morning, one of the aforementioned House Wrens was scolding furiously from a perch overlooking paradise—one of our favorite neighborhood lawns, filled with colorful flowers and shrubs, and a bird bath. We wondered, was the wren trying to scuttle us away—and our not-quite-little dog, too? Then we spied a cat sprawled along the wheel of a tire in the driveway; we as well as the wren wished the owner would keep the kitty inside. 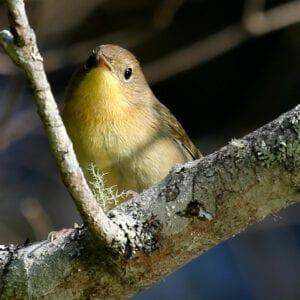 Thanks to Loki’s frequent excursions, the authors sometimes discover birds in their neighborhood they might otherwise miss, like the Common Yellowthroat. (Photo of juvenile yellowthroat by David Small)

One of Loki’s regular stops is at a brushy area near a home that is being remodeled at the corner of one of our favorite intersections. His adventures there ensured that we heard the migrants in the patch of forest nearby a few weeks ago. To our great delight, these included a Canada Warbler, an American Redstart, and a Common Yellowthroat. One day we heard a Red Crossbill calling as it flew in the airspace over several streets—a bird we likely would have missed had we not been walking Loki. Further on we saw, as always do, low-flying Chimney Swifts looking as they do like flying cigars with their rapidly beating wings, making their chittering calls. As Loki sniffs around the old tree stump there, we watch to see if we can spot them dropping down to their nest in a chimney of one of the big, old houses nearby.

In the last few weeks, our heat-and-humidity-induced slow pace has allowed us to notice that whenever we see a crow appear, a Blue Jay pops up nearby and tries to chase it off. We figured the jays had young in a nearby nest that they are worried might become dinner for the crows if they are not always on alert. Today, three jay “teenagers” were well out of the nest and doing teenage jay things like picking curiously at the clothes pins on a clothesline, and hopping around on the ground, and just generally being a handful for their parents to keep track of and keep well fed.

Thanks to Loki, we slow down and enjoy the subtleties of our neighborhood and the birds, who, like us, call it home. Thanks to him, the routine of their daily lives has become even more a part of our own.