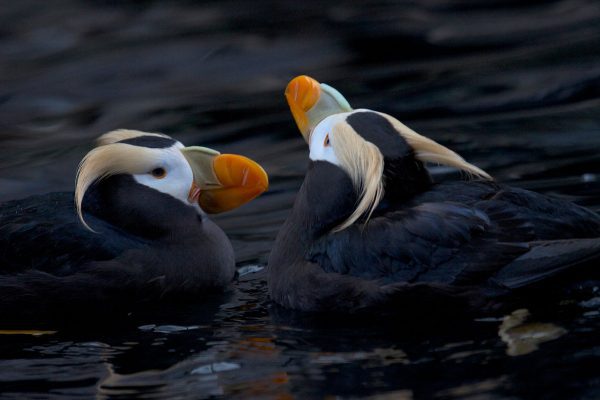 Maine recently added another mind-blowingly rare bird to its formidable list: Tufted Puffin. This mega-rarity was first seen in June on Petit Manan, an island 2.5 miles off the coast of Steuben in Washington County, and then on Machias Seal Island, about 10 miles from the Cutler Coast. Presumably the same bird was seen earlier in July on Seal Island National Wildlife Refuge, located 21 miles off the coast of Rockland.

Sound familiar? The Russian and Japanese parts of the Tufted Puffin range overlap with that of another ultra-rare bird that visited Maine. Earlier in the year, bird enthusiasts and curiosity seekers alike came from across Maine and far beyond to see the state’s first documented Steller’s Sea-eagle, a visitor that breeds in Russian Siberia and winters in Japan. 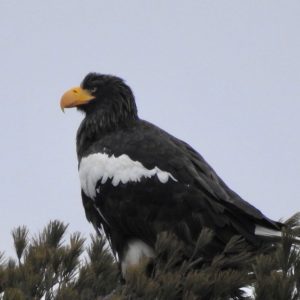 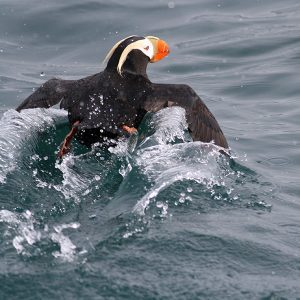 How about some more mind blowing? Unlike the sea-eagle, it’s highly unlikely that a marine bird like the Tufted Puffin could or would have flown across the decidedly non-ocean interior of the continent to arrive on the Maine coast. Instead, the bird may have flown through some portion of the famed Northwest Passage of Arctic Canada. The distance from its northern Alaska breeding range to the Gulf of Maine is closer to 4,500 miles! Now how about some intrigue? A well-known Canadian birder has three times (in 2017 and 2019) spotted single Tufted Puffins flying past a coastal location on the Beaufort Sea coast of Yukon in summer, about 400 to 500 miles from the nearest known breeding location in Alaska. And for what it’s worth, two of the three times the birds were flying east. Is there a regular eastward migratory movement of small numbers of Tufted Puffins that was previously undetected? Single Tufted Puffins have been documented once in Sweden, once in the UK, and once in Greenland!

And how about this: John James Audubon himself made a painting of a Tufted Puffin from a specimen that he wrote had been obtained by a hunter at the mouth of the Kennebec River in the winter of 1831-32! That record had always seemed dubious for obvious reasons until a Tufted Puffin was discovered and well-photographed at Machias Seal Island in July 2014. That bird and the one found this summer are the only records of the species along the Atlantic Coast of North America. 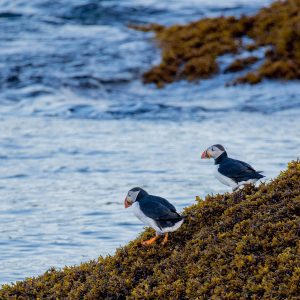 A bird this rare requires photographic documentation for unquestionable acceptance by the birding community at large, and so it should. But that doesn’t mean Tufted Puffins are hard to confuse with anything else. With its all-black body, spiffy orange bill, and namesake feature, the dramatic golden tufts, you won’t have to guess if you see one. 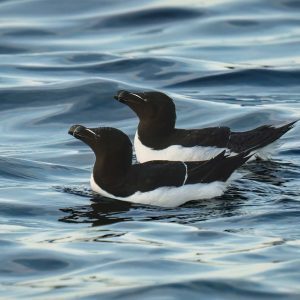 There have even been rumors (unconfirmed, as far as we know) of the bird being sighted near Eastern Egg Rock. We certainly had our binoculars ready for the possibility when we were out there in late June for the Natural Resources Council of Maine’s annual puffin cruise with our members. In addition to hundreds of Atlantic Puffins we were fortunate to see a number of special breeding birds such as the federally endangered Roseate Tern and the Arctic Tern, which in Maine breed only on the outer islands of the Gulf of Maine. We also had the good fortune to see two handsome, breeding-plumaged Razorbills, which breed on a few Maine islands. However, we see them more often in winter while scanning the ocean from a cold, rocky headland with a frigid wind whipping our faces. Great birds, great birding, and the wonderful company of NRCM members. But alas, no Tufted Puffin.

We all know that nature is unpredictable. So if you’re on the water, keep your eyes open for the possibility of this flashy super-rarity!