At the Maine Moose Permit Lottery

The headline of a recent Bangor Daily News article reads “Maine to reduce moose hunt permits by 25 percent because winter ticks have taken toll on herd.” I had no idea that ticks have already had such a toll on Maine’s moose. I had heard about declining moose populations in New Hampshire and Minnesota, but had not realized that Maine’s moose were at such risk from ticks, and that increasing average temperatures due to climate change were to blame. With the moose permit lottery just around the corner, the headline stuck out especially.

The Maine moose permit lottery is an annual tradition that stretches back decades. Every year in late May or early June, hopeful hunters gather to see if their names are selected to bag a moose in the fall. I am not a hunter and thus not a big fan of the moose hunt, but I recognize how important it is to the economy of Aroostook County and how frustrated some hunters must be about the cut in permits this year. I am very concerned about the welfare of all of our life and the impact of climate change on it. So when I got the call from NRCM Outreach Coordinator Todd Martin asking me to hand out information at the annual moose lottery, I was glad to do it. 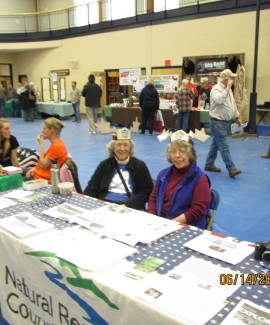 This year’s annual moose permit lottery was held on Saturday, June 14th at the University Of Maine in Presque Isle. My friend (and fellow NRCM member) Gail Maynard and I spoke with many lottery attendees. We wore our moose antler hats, handed out news articles about the explosion of the tick population across Maine, and connected the dots between climate change, increased tick population, and impacts on Maine’s moose herd. I expected some push-back from the sportsmen and women in attendance but found virtually all I talked with to be in agreement with our cause and curious to know more about the connection with climate change. I left the lottery with a renewed sense of hope that the better we are able to connect the dots between the impacts of climate change and how it affects our everyday lives, the sooner we can address the problem. I was pleased to volunteer for NRCM that afternoon.

I have lived in Presque Isle for 20 years. I was born in Portage Lake. I raised my kids in this area. When I was growing up, and even when my children were growing up, we never had to worry about finding ticks on ourselves after hikes in the woods or fishing trips on Fish River or Beaver Brook. They simply didn’t exist in northern Maine, at least that I was aware of. The boom in ticks this year is just one of the several ways climate change is already impacting Maine. Shorter skiing and snowmobiling seasons, the invasion of green crabs devastating clam flats, cancelled ice fishing derbies—the list goes on.

Thankfully, the U.S. Environmental Protection Agency recently proposed the single largest action the U.S. has ever taken to reduce climate change pollution: limiting carbon emissions from existing power plants. Power plants emit nearly 40 percent of U.S. carbon emissions annually, yet there are no limits on the amount of carbon they can emit. As a member state of the Regional Greenhouse Gas Initiative (RGGI), Maine is already ahead of the game on cleaning up our power plants. As the tailpipe state of the nation, air pollution from hundreds of power plants in the Midwest blows across Maine every day. Maine has everything to gain and nothing to lose from the EPA’s proposed rules.

I urge Maine Senators Collins and King to support the EPA’s proposal to limit carbon pollution from power plants. It’s the right thing to do for Maine people and for Maine’s moose.