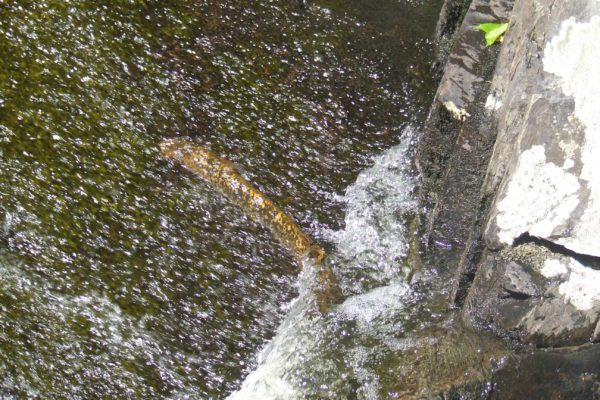 Cool fact: Lampreys have a suction cup-like mouth that they use for nest-building and to grab onto rocks so they can move upstream.

This creature looks like an eel at first, until you look closer and see its  disc-like sucker of a mouth and rings of rasping teeth and a row of seven gill-holes along the side of its head. What is this strange creature we call the sea lamprey?

First of all, the sea lamprey, or Petromyzon marinus, is native to Maine. Anything negative you may have heard about it is undoubtedly rumor that has drifted East from some other part of the country where the lamprey is not native and, as non-native introduced species tend to be, is considered a pest. Maine’s lamprey is one of nearly 50 species in rivers and coastal seas around the world.

Second, sea lampreys are old. Along with their cousins the hagfish, lampreys are the only jawless vertebrates still in existence. In fact, they closely resemble the very first vertebrates and have not changed much during their 360 million years on Earth. These ancestors of modern fish survived four major extinction events.

The key to this ancient, primitive animal’s survival is its parasitic feeding habit. Remember the lamprey is jawless; instead of biting and chewing, it attaches to prey (usually fish) with a suction-like mouth and scrapes at the flesh (usually without killing the prey) with rasping rows of sharp teeth. Most people only know lampreys from the wounds and scars left behind on saltwater fish, which is too bad, because it’s the freshwater portion of their life that is the most special.

Like Atlantic salmon and alewives, the sea lamprey is anadromous: after one or two years in the ocean, adults return to freshwater rivers and streams to   spawn. But unlike Atlantic salmon and most alewives, sea lampreys die shortly after spawning. This journey serves to bring marine nutrients to inland   watersheds, providing food for birds (including eagles and owls), mammals, and other fish including striped bass.

But perhaps the coolest thing about the sea lamprey is its role as habitat architect. In preparation for spawning, lampreys build nests by moving rocks around with their strong, suction cup-like mouths, which they also use to move upstream. As they pick up rocks from the bottom, compacted silt is loosed and washed away, creating ideal breeding grounds for Atlantic salmon and improving overall stream health. Salmon, fallfish, common shiners, and brook trout all make use of abandoned lamprey nests for their own progeny. It is this kind of co-evolution that has river advocates looking to the lowly lamprey as part of a whole-ecosystem approach to restoration. Like other sea-run fish, sea lamprey populations have been in decline as a result of dams and other barriers to their spawning migration. River restoration that improves passage for target species also benefits the sea lamprey.

Watch this video of the sea lamprey migration in the west branch of the Sheepscot River in Coopers Mills!

This Creature Feature was provided by Catherine Schmitt of Bangor, author of A Coastal Companion: A Year in the Gulf of Maine from Cape Cod to   Canada.