Cool Fact: The Portland Sea Dogs, a minor league baseball team, are named after a slang term for the harbor seal.

Anyone who has spent much time on the coast of Maine has probably seen a harbor seal. Seals haul out on rocks to rest and sun themselves, often posing with their heads and tails upraised in a “banana” position. While usually solitary, they will gather on land in sizeable groups during breeding season or to rest and can be easily spotted hanging out together on sunny offshore ledges. 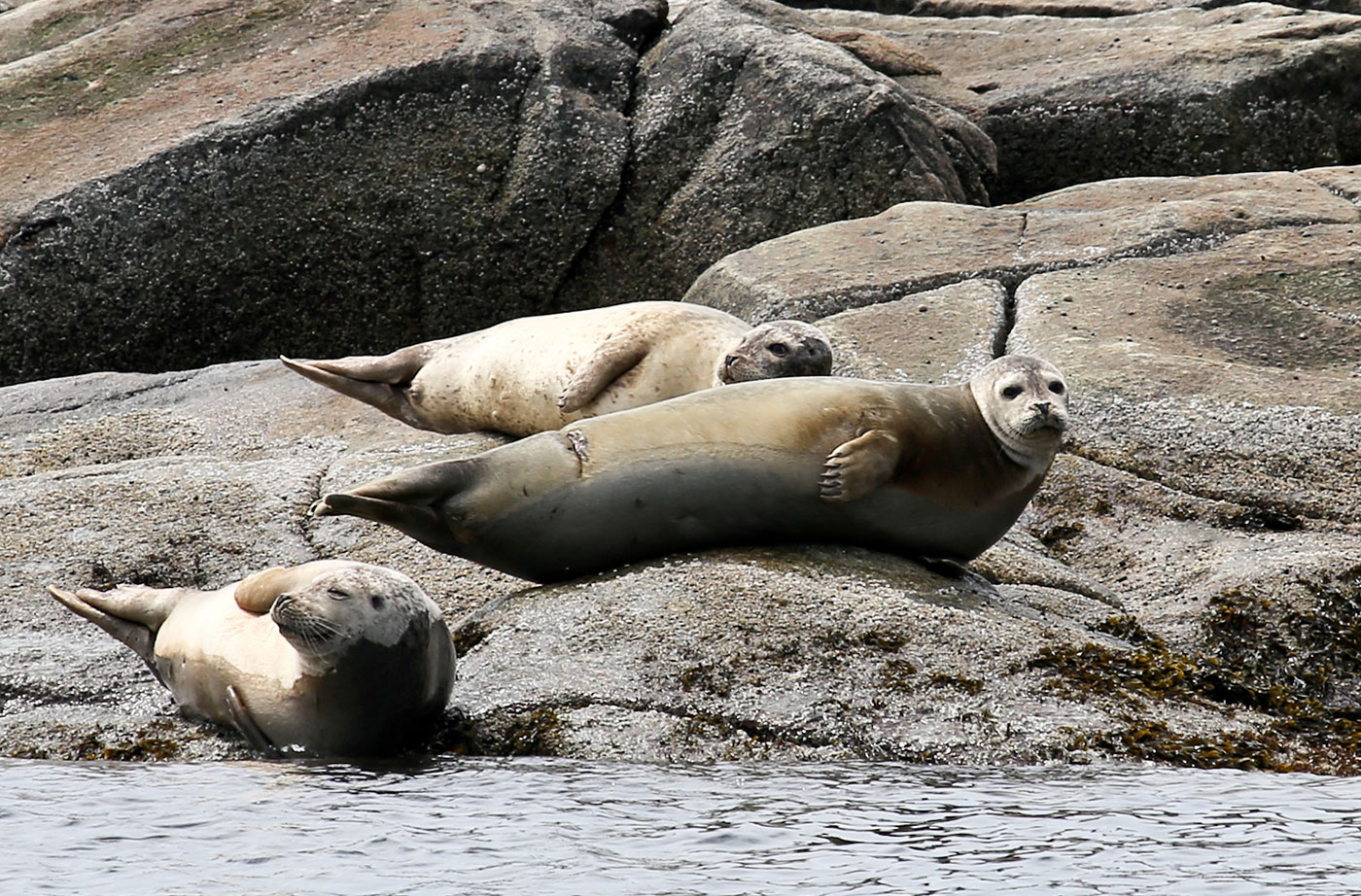 Harbor seals off the coast of Maine. Photo by David Small.

On land the seal may look ungainly. But once it hits the water, the stream-lined animal is in its true element, a graceful and powerful swimmer. Harbor seals regularly feed at depths of up to 500 feet, with some seals recorded at depths of over 1,400 feet, and can remain underwater for as long as 30 minutes at a time. During a long dive, a seal is able to slow its heart rate and draw on stored oxygen from its blood and muscles.

To maintain its body temperature in frigid ocean water, where it spends at least half its time, the seal also metabolizes at a high rate for its size. For added warmth in the winter months, seals pack on extra blubber. This body fat can make up as much as 30% of a seal’s mass.

Seals are not picky eaters, enjoying many kinds of fish, squid, octopus, shellfish, and crustaceans—including lobsters. They swallow most of their food whole, crushing shells and bones with their back molars.

Harbor seals range in color from brown to gray, with visible spotting, and blend in well with their surroundings when hauled out on a rock or ledge. Males weigh from 120 to over 300 pounds and run about five to six feet in length; females are slightly smaller. While a big animal, the harbor seal is only about half the size of the gray seal, the other seal species that breeds in Maine waters. In addition to body size, the harbor seal can be distinguished from the gray seal by the shape of its head: the gray seal has a longer, horse-like head with parallel nostrils, compared to the harbor seal’s dog-like head with V-shaped nostrils. Both species are “earless” seals with no visible ear flaps.

The harbor seal is the most widely distributed species of true seal in the world. They can be found in coastal waters of both the north Atlantic and north Pacific, and are year-round residents along the Maine coast. Since 1972 harbor seals have been protected from hunting and harassment by the Marine Mammal Protection Act. Their numbers have been steadily growing since then, with a recent estimate by NOAA Fisheries putting their population in the waters of New England and Maritime Canada at more than 75,000. The biggest threats to harbor seals besides natural predators like sharks are human-caused, including entanglement with fishing gear, excessive boat traffic near nursery sites, water pollution, and habitat destruction.

In Maine, harbor seals give birth from April to June. A mother seal nurses her one pup for four to six weeks. Thanks to the high fat content of seal milk, the pups, which weigh about 25 pounds at birth, may double their weight by the time they’re weaned. A seal pup can swim shortly after birth and even make short dives on its own. If necessary, it will also hitch a ride on its mother’s back in the water. 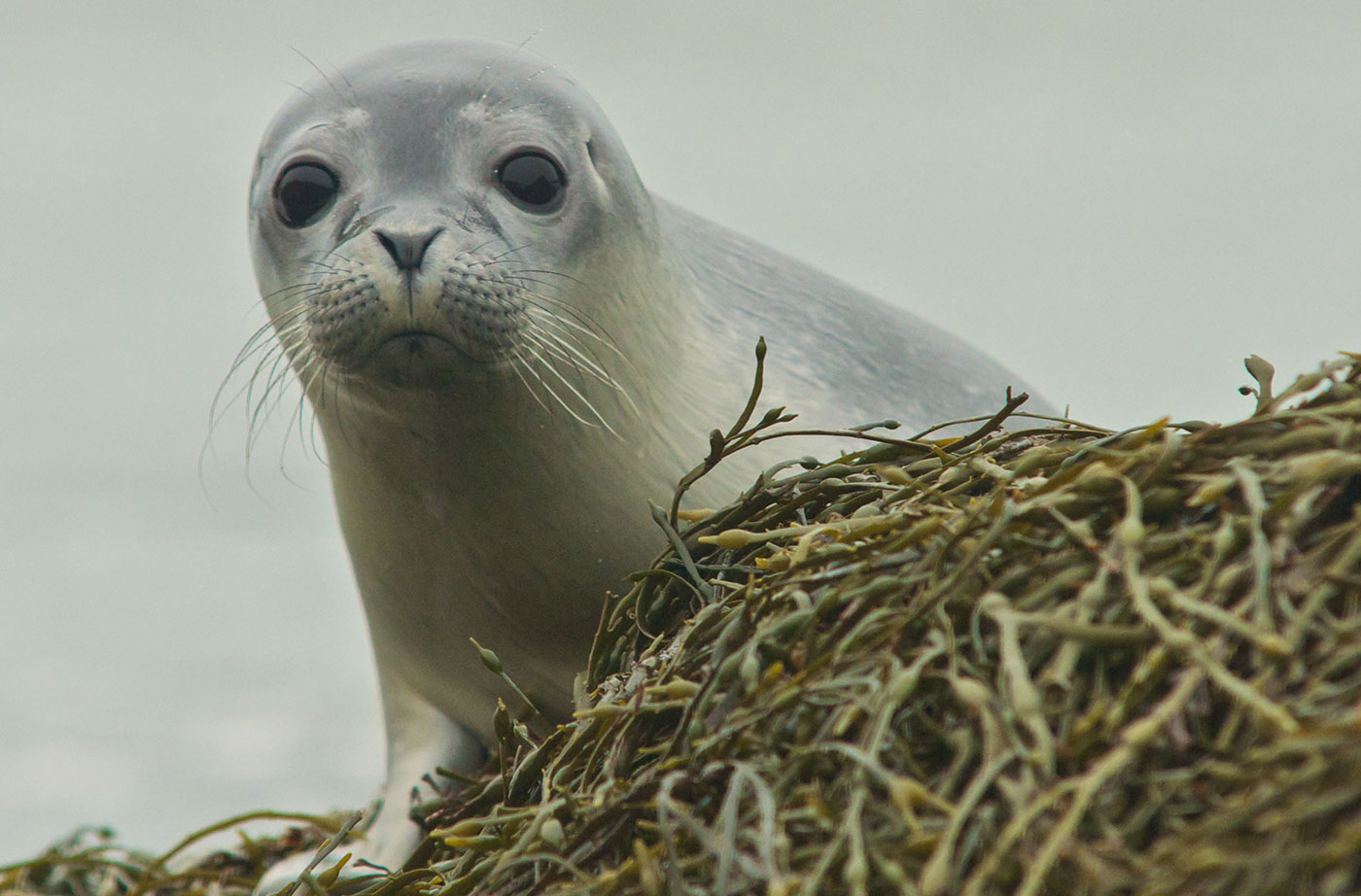 A seal will leave her pup alone while she feeds herself. Seemingly abandoned pups are often “rescued” unnecessarily. For this reason, a young seal found on its own should be left alone and monitored from a distance, so as not to scare off the returning mother.

Harbor seals often appear to be interested in what humans are up to, lifting themselves up out of the water to watch with curiosity as a boat passes by. In Scottish legend, a selkie is a seal that can shed its skin and become human, interacting as a man or woman. Stealing its shed sealskin will trap the selkie in human form.

Probably the best-known harbor seal was Andre, adopted as a wild pup in 1961 by Rockport, Maine, resident Harry Goodridge. Andre lived (and performed tricks for the public) in Rockport Harbor for 25 years. His life with the Goodridge family, with whom he stayed voluntarily, was documented in several books and a movie. Unfortunately, the movie Andre is actually played by a sea lion. Andre is commemorated by a popular granite statue in Rockport’s Marine Park.