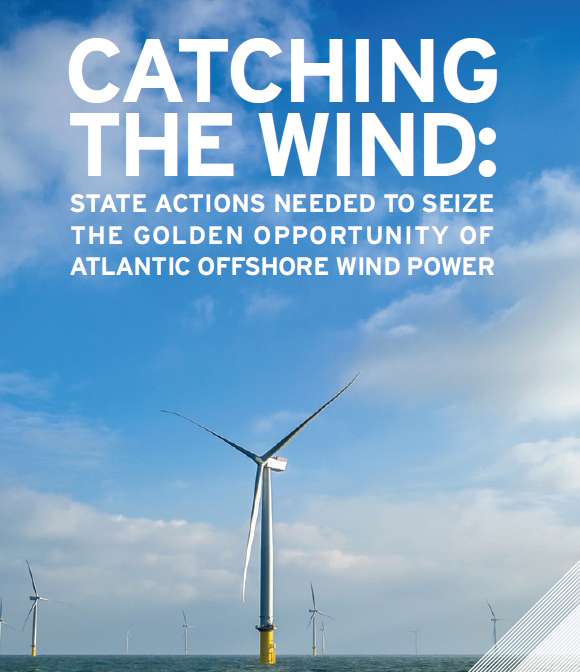 July 10, 2014  Augusta, ME – More than 1.5 million acres off the Atlantic coast have been designated for offshore wind power development, enough to produce more than 16,000 megawatts of electricity and power more than five million homes, according to a new report from the National Wildlife Federation. “Catching the Wind: State Actions Needed to Seize the Golden Opportunity of Atlantic Offshore Wind Power,” also contains a new analysis showing how the strong, consistent winds offshore can provide power to Maine right when we need it most – and, at the same time, cut energy costs and air pollution here in Maine.

The report notes that Maine has made important initial steps, although the state appears to be lagging behind others such as Massachusetts, Rhode Island and Maryland. After several years of growing momentum in offshore wind research and development in Maine, multinational energy giant Statoil announced last October that it was abandoning its plan to build an offshore wind project in Maine using floating turbines, citing regulatory and political uncertainty in the state, a likely reference to the Governor LePage’s actions to re-open a power contract that had been awarded to Statoil. Since then the Maine Public Utilities Commission has given initial approval to a contract for three offshore wind turbines proposed by a University of Maine-led partnership. This spring the University failed to win a major competitive grant from the U.S. Department of Energy that would have provided some of the capital to build the three-turbine project.

“Offshore wind power is a huge clean energy opportunity for Maine, and we had begun to assemble all the right pieces from the public and private sector,” said Dylan Voorhees, Clean Energy Director for the Natural Resources Council of Maine. “Unfortunately, right when we had a championship team taking the field, in the form of Statoil, we committed a major fumble. Then, perhaps as a consequence, Maine was passed over by a big federal offshore wind grant. The lesson learned is that if Maine wants to compete for clean, locally-produced, competitively priced energy; good jobs; and the full range of opportunities offshore wind offers, all of our elected officials need to commit to making Maine a leader.”

“The Atlantic Ocean is a clean energy and job-producing goldmine,” said Catherine Bowes, senior manager for climate and energy at the National Wildlife Federation. “With areas offshore that can power five million homes currently available for leasing, it is a critical moment for state leaders to seize this golden opportunity and create a clean energy future powered by American workers that can protect our wildlife and communities from the dangers of climate change.”

“Maine has been harnessing local, sustainable renewable energy for generations in the form of wood and waters,” said Maine Representative Barry Hobbins, co-chair of the Legislature’s Energy & Utilities Committee. Now we can cost-effectively add the wind, sun and tides to the abundant energy resources Maine can tap. Offshore wind presents an enormous energy potential for Maine, but much work needs to be done to unleash not only lots of energy, but many jobs and economic opportunities. We’ve had outstanding champions in Washington DC for Maine renewables, however we need leadership at all levels.”

“Maine has a long history of maritime business, industry and innovation,” said Maine Senator Roger Katz, the Assistant Minority Leader. “Harnessing the large offshore wind potential in the Gulf of Maine could not only provide sustainable energy for our state, but create business opportunities for Maine workers and companies poised to manufacture, construct and maintain offshore wind facilities.”

“Despite the enormous potential for Maine to harness pollution-free wind off of our coast, Governor LePage has spent nearly four years obstructing the development of wind power and in some cases with grave ramifications, such as the decision of Statoil—the equivalent of Apple or Google in the energy industry—to pull out of the state,” said Environment Maine Director Emily Figdor. “The Governor’s actions undermine Maine’s progress on clean energy, our environment, and local economic development.”

Highlights of Catching the Wind include:

Catching the Wind highlights key progress made to date along the coast, finding a strong correlation between proactive state efforts and tangible steps forward in advancing offshore wind power.

The report notes that the University of Maine has led a the development of an operational scale model of a floating offshore wind turbine and has plans to develop the Aqua Ventus project, a three-turbine, 12 MW wind facility off of Monhegan Island. Although the University did not win one of the highly competitive offshore wind development grants it recently sought, the U.S. Department of Energy did award the University a $3 M grant to continue research on floating turbine technology. This comes after multiple previous federal grants to for offshore wind research and development, which have been strongly supported by Maine’s congressional delegation.

“The University of Maine and its team of public and private partners remain enthusiastic about the opportunities from the VolturnUS technology to tap into the largest sources of renewable energy in Maine,” says Jake Ward, UMaine’s Vice President for Innovation and Economic Development. “The winds in the Gulf of Maine are still there. The need for economic, environmentally sustainable renewable energy that can create local and U.S. jobs is still an important goal for Maine and the United States. The extensive work that the UMaine lead team has completed to date, including the now-13 month successful deployment at Castine of the only floating offshore wind project in the Americas connected to the grid, is very important to meeting these goals.”

“Deep-water, offshore wind has enormous potential to help us meet our nation’s electricity needs and to reduce our dependence on foreign oil,” said U.S. Senator Susan Collins. “Maine is leading the world by working to harness the powerful offshore winds in the Gulf of Maine into a new era of clean, domestic energy that would help create thousands of much-needed, good-paying jobs.”

“As energy prices rise, carbon pollution mounts, and ocean environments experience unprecedented changes, it is increasingly evident that we must look beyond fossil fuels for our energy needs,” said U.S. Senator Angus King. “Offshore wind presents an incredible opportunity for us to harness clean and renewable energy, and I am confident that the state of Maine will continue to be a leader in this important industry.”

In its recommendations, the report challenges Maine’s leaders to move forward with the following key actions to bring transformational offshore wind power online. Maine has already achieved the first tangible recommendation, by setting a specific, ambitious target for offshore wind development of 5000 MW by 2030.

“Hundreds of Maine businesses are already at work every day helping take advantage of the state’s abundant onshore wind energy resource,” said Dana Connors, President of the Maine State Chamber of Commerce.  “They are making capital investments, hiring workers, installing equipment, and building expertise for the 21st century. Offshore wind could present an enormous opportunity for our energy and marine businesses to strengthen Maine’s economy for the long-term.”

“The Gulf of Maine has potential to provide an abundance of clean renewable energy from offshore wind,” said Paul Williamson, Coordinator for the Maine Wind & Ocean Industry Initiative. “The State has learned tough economic lessons from the effort to attract required investment for these projects. With a protracted view, knowledge of the future demand for clean energy with the Gulf of Maine having the most abundant east coast resources provides confidence that with the proper leadership, Maine remains positioned for economic growth and job creation in fulfilling the role of a major clean energy provider.”

Read the report at https://www.nrcm.org/wp-content/uploads/2014/07/CatchingtheWind.pdf and get more updates from the National Wildlife Federation at NWF.org/News.