NRCM Prepared to Fight to Overturn Them in the Legislature

“The Maine Public Utilities Commission’s (PUC’s) new net metering rules include some of the most extreme anti-solar elements in the nation. They would roll back solar net metering, destroying good Maine jobs, and harming our economy, our environment, and every Mainer who pays a power bill. NRCM strongly opposes these costly rules, which would stifle investment in clean, local, solar power and increase energy costs for all Mainers. In the wake of the PUC’s decision, it is essential that Maine lawmakers pass an effective bill that overturns these rules and puts Maine on track to increase our production and use of solar power.

“Solar is the fastest growing energy source in the nation and is driving strong job growth elsewhere in the Northeast. In Maine, solar could generate hundreds of quality technology jobs that keep and attract workers in our towns and rural areas, too. But, if allowed to take effect, these new rules will threaten existing and potential new jobs and guarantee that we remain in last place in New England for solar jobs and energy production.

“Under the PUC’s extreme anti-solar rules, for the first time utilities would charge Maine homes and businesses for solar power they produce and consume themselves on site. In an expensive, unfair, and unworkable new requirement, new solar customers will be forced to install an extra meter on their solar panels (at the expense of all ratepayers) so they can be forced to pay utilities a fee for solar power that never enters the electricity grid. This dangerous, topsy-turvy concept is like a supermarket charging you a fee for vegetables you grow and eat at home.

“This has been a disgraceful process since it started with a so-called ‘review’ of net metering last summer. The PUC has ignored the public interest throughout. They failed to conduct any analysis of the costs and benefits of net metering, so they cannot even say whether these rules will help or harm ratepayers.

“The PUC’s previous studies clearly suggest that increased use of distributed solar in Maine leads to lower electric rates. But, the proposed rules would reduce Maine’s use of solar, leading to higher electric rates. The PUC ignored the overwhelming weight of public and expert opinion that was submitted. And, to make matters worse, the PUC chose to move forward with an extreme solar policy when it knew it could have left the issue to the Legislature: Its entire rulemaking was optional and not required by any law. The PUC failed to conduct any analysis supporting its action, and literally manufactured this solar crisis out of thin air.

“Governor LePage incorrectly blames solar power and net metering for Maine electric rates, while, in fact, solar in Maine today has almost no effect on them. Even CMP’s exaggerated and one-sided claims about the cost of net metering amount to 0.1% of our rates. In contrast, a very large and rapidly increasing portion of Maine’s electric rates comes from increased spending by monopoly utilities for pricy transmission lines. Utilities earn a high, guaranteed rate of return when they build new transmission lines, so they have a strong incentive to push them. The PUC’s new rules do nothing to address this problem. Worse than that, one way to lower these costly grid investments is with distributed solar power, which will be slowed under these rules.

“Solar power provides clean, reliable power at peak times when we most need it—when the most expensive power plants must operate. Solar also puts the power where we need it—right at homes and businesses—reducing the need for costly transmission line expansion.

“NRCM will pursue every opportunity to overturn the PUC’s extreme anti-solar rules. The best and swiftest solution is for the Legislature to enact an effective law to move Maine forward this session, before these extreme rules take effect at the end of 2017. The Legislature should be setting solar policy in Maine, not the PUC. With others, NRCM is also likely to to file a ‘motion for reconsideration’ with the PUC, giving them one last chance to set aside these extreme changes.”
Background:
The rules issued today are the final version of rules the PUC proposed in September, 2016. They reflect in writing the decision of the Commissioners made verbally at their public deliberations on January 31, 2017. The final rules closely resemble the draft rules, which were almost universally opposed by thousands of Maine people, businesses, organizations, and municipalities as unworkable, unfair, likely illegal, and costly to ratepayers.

The Office of the Public Advocate, which represents ratepayers, testified that it had “significant concerns with the rules,” noting they “include provisions that are unclear, unworkable, and potentially unlawful.”

Public opposition to the solar net metering rollbacks included more than 4,000 comments received by the PUC. Polling shows that a strong majority of Mainers oppose the rollback, including majorities of: Republicans, Democrats, Independents, those aged 65+, with incomes less than $50,000, and from every part of the state. 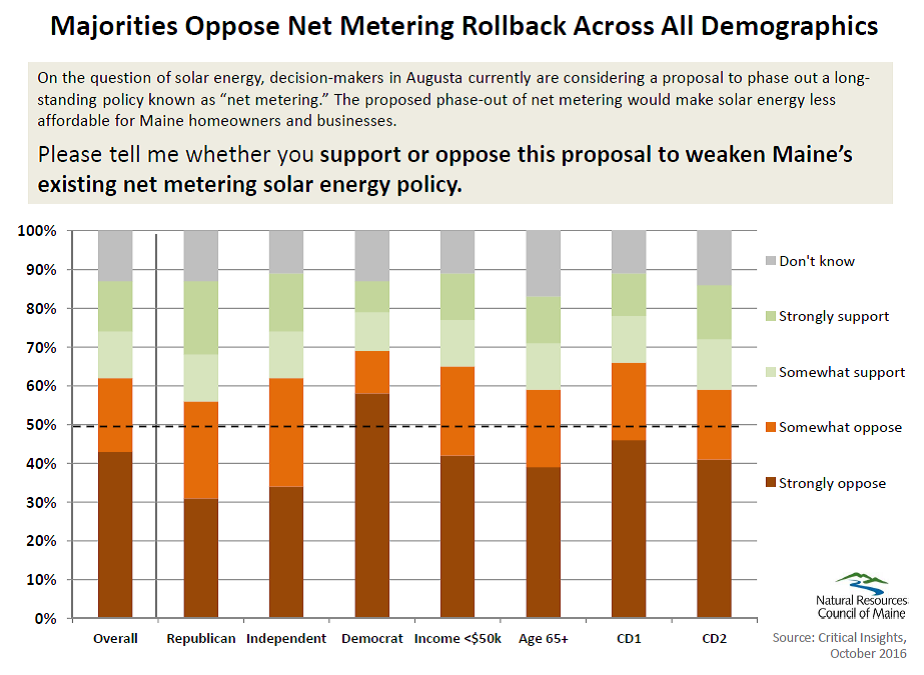