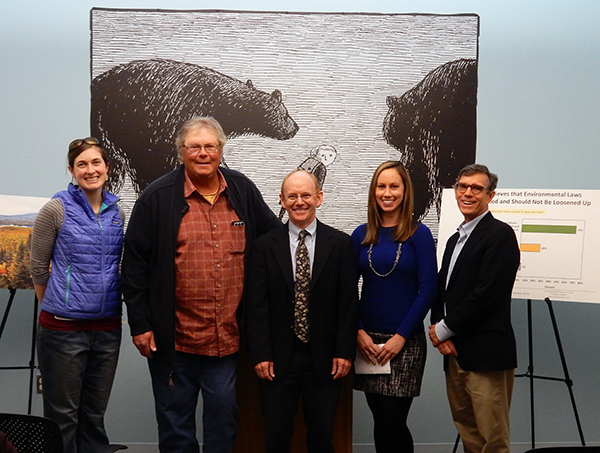 Portland, Maine – Today, the Natural Resources Council of Maine released the results of a comprehensive public opinion survey on the attitudes of likely Maine voters on a broad range of environmental policy issues. With Mainers heading to the polls in two weeks, the survey documents broad, bipartisan support for protection of Maine’s environment and development of clean energy. The results were mailed today to all 361 candidates for legislative office.

Of particular note, the survey shows that 72% of Maine voters support the recently established Katahdin Woods and Waters National Monument, compared with only 22% opposed. This is the first detailed survey of Maine voters to be completed and released since the National Monument was established on August 24, 2016. The survey also shows that voters believe the monument will boost tourism and create jobs in nearby communities.

“Maine people are giving a big ‘thumbs up’ to the new Katahdin Woods and Waters National Monument,” said NRCM Advocacy Director Pete Didisheim. “They see it as a magnet for tourism and job creation in a part of the state that desperately needs economic progress.”

On other issues, the poll found that a large, bipartisan majority of Maine voters support funding the Land for Maine’s Future Program (80% support to 15% opposed), oppose weakening Maine’s mining regulations (75% oppose to 18% support), and believe Maine’s environmental laws are working and should not be weakened (70% to 26%). Nearly 60% of Mainers believe that harmful impacts of global warming are already underway, and about the same number (61%) want solar energy to be a higher priority for the legislature.

The survey was conducted by DRI/Critical Insights between September 23 and October 5, 2016. Data was gathered from 405 interviews with a statistically-representative cross-section of self-reported registered voters, via both landline and mobile phone. The results have an associated margin of error of ±4.9 percentage points at the 95% confidence level.

“We’ve mailed these results to every candidate for legislative office because we believe they should understand the position of Maine voters on these key issues,” said Didisheim. The data also was released at a Portland news conference where speakers discussed how a clean and healthy Maine environment contributes to Maine’s economy. Each of the speakers has a job that depends on Maine’s environment or clean energy development.

Lindsay Downing (Mt. Chase Lodge): “I grew up in the Katahdin Region and attended Katahdin High School. Like so many of my friends, I left the state when I graduated.  I left for college and to gain work experience, but I was able to return last year with my husband to take over our family business—the Mt. Chase Lodge. We’re located near the new Katahdin Woods and Waters National Monument, and I can tell you that we already are seeing a big boost in business.  People are coming from around the country to visit the National Monument, proving that it will provide positive benefits to businesses in our region. It already is. We’ve been so busy that it’s been hard to find time to prepare for winter.  We’re already thinking about making investments to expand and improve Mt. Chase Lodge in the future.”

Macauley Lord (Professional Fly-Fishing Instructor and Registered Maine Fishing Guide): “I have taught fly-fishing professionally for more than 30 years. I’m a Registered Maine Fishing Guide, the author of two fly-casting books, and I’ve trained fishing guides and fly-casting instructors on four continents. From this experience, I can tell you that Maine has some of the best places to fish in the world. We have a very high percentage of the best trout habitat left in the entire eastern United States. We are a destination for world-class fly fishing experiences.   We should be doing all we can to protect our freshwater fisheries, and not subject them to threats such as open-pit metal mining. Around the world, the pollution from metal mines has destroyed rivers, streams, and fish populations—and the jobs and recreational opportunities connected to those resources. We can’t let that happen here in Maine, so I’m pleased to see that such a high percentage of Maine people oppose weak mining regulations.”

Holly Noyes (Revision Energy): “I grew up on a 3rd generation dairy farm in Albion and left the state after college to gain greater work experience and pay off my student loans. But a good job in Maine’s solar industry made it possible for me to come back, so I can someday raise a family here. Solar jobs cannot be outsourced. They represent an economic growth opportunity for the state. It’s not surprising to see that Mainers think solar energy should be a higher priority.  Maine’s solar industry is expanding, despite the lack of policies to accelerate solar installations. Other states have better policies and are creating more solar jobs than we are. I know we can do better, and Maine people seem to feel that way as well.”

Richard Nelson (Lobsterman, member Maine Ocean Acidification Commission and Maine Regional Ocean Planning Advisory Group.): “I am a lobsterman out of Friendship, Maine, with 30 years fishing experience. It’s clear to me that our ocean is warming and becoming more acidic. We’re now seeing how species react to these changes in their molt and life cycles, migrations, and abundance. We see the increase of severe weather events, algae blooms, fish die-offs, and closures due to toxins. These issues affect fishermen by threatening our livelihoods, and reinforce our heritage of conservation. We must reach beyond our industry, to friends, neighbors, and decision-makers to help bring about policies to help us maintain the healthy ocean we depend upon. From carbon policy to ocean debris, from remediating ocean acidification to nutrient loading, all have become part of the realities and thoughts of a Maine fisherman.”

Most Voters Oppose Rollback of “Net Metering” for Solar Energy

Most Mainers Believe Impacts of Global Warming Are Already Happening

Impacts of Global Warming Will Be Significant

Majority Believe Environmental Laws Work and Should Not Be Weakened

Asked to choose between two statements:

Favorability Ratings Vary for Individuals and Organizations Maine voters had the following favorable vs. unfavorable sentiments:

Contact at Polling Firm: DRI I CRITICAL INSIGHTS I dpa

DRI I CRITICAL INSIGHTS I dpa