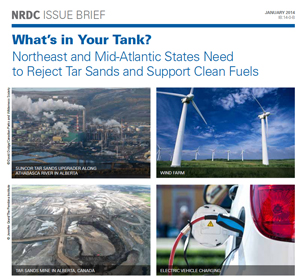 Portland, Maine—Unless we act to stop it, Maine motorists may soon be filling their tanks with gasoline derived from Canadian tar sands, according to a new report released today by the Natural Resources Defense Council. The oil industry plans to start pumping refined tar sands gasoline to Maine, despite widespread opposition to shipping unrefined tar sands crude through the Sebago Lake watershed to Casco Bay. The analysis also shows that currently Maine and the Northeast get essentially zero gasoline from tar sands, making the region practically tar sands-free, for now.

“It’s outrageous that the oil industry expects Mainers to fill up our gas tanks with tar sands, given all of the opposition to shipping tar sands through the Sebago Lake watershed and out of Casco Bay,” said Emily Figdor, director of Environment Maine, which co-sponsored the report. “We’re not going to sit back and let the oil industry bring the dirtiest, most carbon-intensive oil on earth to Maine. We’re committed to keeping Maine tar sands-free.”

“To get to our gas tanks, tar sands will first have to be shipped thousands of miles, threatening the water supplies of communities all along the pipeline route, before it’s refined. If it’s not okay for South Portland, it’s not okay for all of the other communities along the route,” said Rachel Burger, founder of Protect South Portland, the citizens group that successfully passed a six-month moratorium though the South Portland City Council in December to ban shipping tar sands out of their city.

A flood of tar sands into Maine would seriously undercut our state’s efforts to reduce carbon pollution that is causing climate change. The NRDC report found that under current plans, tar sands-derived gasoline supplies in 11 Northeast and Mid-Atlantic states (including Maine) would soar from less than one percent in 2012 to 11.5 percent of the total by 2020, due to increased imports from Canadian refineries, fresh supplies of refined tar sands fuels from Gulf Coast refineries, and quantities from East Coast refineries that would obtain tar sands crude via rail and barge. Under one scenario examined in the report involving more aggressive tar sands infrastructure expansion, the Northeast could see 18 percent of its gasoline come from tar sands.

At 18 percent penetration, the switch to tar sands would increase carbon pollution by approximately 10 million metric tons—essentially wiping out the promised carbon reductions of the landmark Regional Greenhouse Gas Initiative.

“This should be a wake-up call: Unless we act, gasoline in Maine will not stay tar sands-free,” said Dylan Voorhees, Clean Energy Director for the Natural Resources Council of Maine. “In the last decade, Maine has made so much progress in reducing climate pollution, but if we don’t keep tar sands-derived gasoline out of the state, it would be like putting 33,000 additional cars on the roads in Maine.”

Just last week, the Regional Greenhouse Gas Initiative’s new, more stringent limits on carbon pollution from power plants took effect in Maine and nine other northeast states. Maine also was among the first states to establish carbon limits for cars and SUVs, and the state has taken numerous other actions to reduce carbon pollution—though the pace has slowed substantially under Gov. Paul LePage. But these important carbon savings would be squandered by using gasoline from tar sands, which emits at least 17 percent more carbon pollution than conventional gasoline measured on a life-cycle basis.

“Dirty gasoline supplies in the Northeast and Mid-Atlantic are set to rise significantly, unless states take steps to keep out high-carbon fuel,” said Danielle Droitsch, NRDC Canada Project Director. “By 2015, the volume of tar sands-derived fuel in the Northeast could grow six-fold, compared to 2012. This shows how important it is to move as quickly as possible to clean energy.”

“The new Gulf Coast Pipeline, which will bring tar sands crude from Cushing, Oklahoma, to refineries on the Gulf Coast, makes it even more urgent for communities and policy-makers to take action to keep tar sands out of the region,” Droitsch said.

If President Obama approves the controversial Keystone XL pipeline for tar sands oil from Canada to the United States, the region’s share of gasoline from tar-sands crude could rise even further, according to the report.

NRDC and the Maine groups oppose Keystone XL, which would carry Alberta’s tar sands oil through the heartland of America to Gulf Coast refineries, in part because it would enable a vast expansion in tar sands production. According to NRDC’s earlier analysis, Keystone XL is primarily an oil export pipeline, but some portion of its refined products would flow to the East Coast.

“Mining and transporting tar sands oil poses serious threats to our climate and to Maine’s communities and clean waterways,” said Glen Brand, Sierra Club Maine Chapter Director. “A first step to keeping dirty tar sands oil out of our state is to give Mainers the right to know what’s going into their fuel tanks.”

The report underscores the importance of promoting a wide variety of low-carbon and no-carbon transportation alternatives, from cleaner fuels to electric vehicles to bike lanes and pedestrian-friendly planning in population centers. The groups called on public officials at all levels of government to increase these efforts and examine a variety of steps to help block the invasion of tar sands gasoline.

“To keep tar sands out of our tanks, our leaders should require wholesale oil suppliers to disclose the origin and the carbon intensity of their fuel, meaning the amount of carbon emitted measured on a ‘well to gas-tank’ basis. They also should pass policies to prevent the use of more carbon-intensive fuels,” concluded Figdor.

The Natural Resources Defense Council (NRDC) is an international nonprofit environmental organization with more than 1.4 million members and online activists. Since 1970, our lawyers, scientists, and other environmental specialists have worked to protect the world’s natural resources, public health, and the environment. NRDC has offices in New York City, Washington, D.C., Los Angeles, San Francisco, Chicago, Bozeman, MT, and Beijing.

The Natural Resources Council of Maine is the leading nonprofit membership organization working statewide for clean air and water; healthy people, wildlife and forests; and clean energy solutions. NRCM harnesses the power of science, the law, and the voices of more than 16,000 supporters to protect the nature of Maine.

Environment Maine is an environmental advocacy organization that works on behalf of its 18,000 members and supporters to preserve Maine’s open spaces, protect clean air and water, and steer the state toward a clean energy future.