Business, Conservation, and Citizen Leaders Gather to Herald Increasing Use and Benefits of Electric Cars in Maine 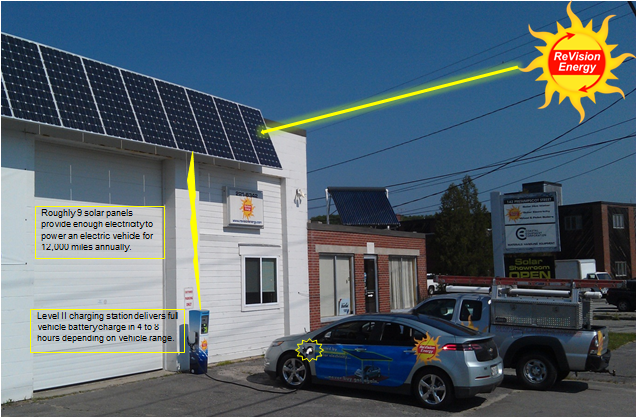 Portland, ME – Today, by a solar-powered electric car charging station, a diverse group of business and conservation leaders and citizen electric car owners gathered in Portland to recognize and celebrate the growing use of electric vehicles in Maine, as well as the tremendous benefits these vehicles can bring to our state. With more and more makes and models now available, electric vehicle (EV) ownership is on the rise in Maine. There are now hundreds on the road here, and roughly half of Maine’s EVs are registered in Cumberland County.

A wide range of plug-in electric vehicles are available today, from all-electric models to “plug-in hybrid” versions, which include significant gasoline engine capacity in addition to a plug-in charged battery. All reduce gasoline consumption and gasoline costs for owners. As a result, conservation groups hail electric vehicles as a major strategy to reduce Maine’s dependence on oil and curb global warming pollution. Stakeholders and EV owners gathered at Revision Energy on Presumpscot Street, which hosts two publically available charging stations.

“Electric vehicles can and should be an essential part of Maine’s energy future,” said Dylan Voorhees, Clean Energy Director for the Natural Resources Council of Maine. “Nearly everyone agrees that Maine must cut our dependence on oil if we want to sustain a strong economy and confront the increasing threat of severe climate change. It is therefore very exciting to see more and more Mainers putting electric vehicle technology to use to do just that.”

“It wasn’t that long ago when hybrid cars like the Prius were a rare, unknown type of vehicle technology,” said Adam Lee, Chairman of Lee Auto Malls. “Now you see them everywhere. They are not just for environmentalists; they are for anyone who wants to save money on gas. It’s important to remember how quickly consumers can pick up on new technologies, especially as they continue to wrestle with gasoline prices. Ultimately the potential is huge for the many variations of hybrids and hybrid electric cars.”

“I am so pleased with my electric vehicle,” said Representative Anne Graham of Yarmouth, co-chair of the Legislature’s Committee on State and Local Government. “I drive quite a bit, especially during the session, and it’s so important to be spending less on gasoline, and contributing less air pollution. I think more Mainers are going to want to take a serious look at electric vehicles.”

Several Portland area businesses are investing in electric vehicles for their own purposes, or charging stations for business and employee use.

“As a developer and property owner, I’m looking at integrating electric vehicle charging at several of my facilities,” said Tim Soley, owner of East Brown Cow Management. “Building the infrastructure for the growing use of these clean, efficient vehicles makes sense for businesses and others in forward-thinking places like Portland.”

In 2012, Revision installed a charging station for two vehicles at the Portland location of its solar energy installation company. The company directs energy straight from the solar panels on its roof right to the chargers, making it possible for vehicles to literally drive on sunlight.

“Very few Mainers are aware of electric vehicles’ tremendous economic and environmental benefits,” said Phil Coupe, co-founder of Revision Energy and an EV owner. “It costs just 3.1 cents per mile to drive our all-electric Nissan Leaf when we use cheap solar electricity to charge the car, compared to 14 cents per mile for a similarly sized gas-powered vehicle. When you consider half of Maine’s local air pollution comes from transportation, these zero emission electric vehicles are the perfect solution to keep Maine beautiful and healthy for generations to come.”

NRCM, Revision, and several other organizations are part of a working group with Central Maine Power for an EV pilot project, authorized by the Maine Public Utilities Commission. The project has provided grants for EV vehicles and charging stations to gather data and increase awareness about electric vehicles. Grant recipients from the first phase include the Maine Organic Farmers and Gardeners Association, Colby College, Fresh Air Ventilation Systems (an HVAC company in Lewiston), E2 Tech Council, and the Greater Portland Area Council of Governments.

“Municipal governments are a really good match for electric vehicles,” said Representative Graham. “Many cities have small or large fleets of vehicles, and/or centralized locations that make good spots for charging stations. I’m very pleased to see municipalities in this county investing in EVs, including Portland, Standish, South Portland, and Scarborough.”

The Greater Portland Council of Governments’ electric car was made available for rotation among member municipalities. Direct experience with the vehicles sparked further interest among towns for more electric cars and charging stations.

“My friends and colleagues are amazed when I tell them I get the equivalent of 100 miles per gallon with my Leaf—even my friends with a Prius,” said Marc Lausier of Scarborough, who purchased the first Nissan Leaf in Maine, in 2012. “There are a bunch of things people need to learn about electric vehicles, but once they do, we’ll find that they are an affordable, practical choice for many, many Mainers.” Now there are roughly 40 Nissan Leafs registered in Maine, from South Berwick to South Paris to Old Town.

According to the Union for Concerned Scientists, a typical electric vehicle charged from electricity in New England will result in lower global warming emissions per mile than even the most efficient hybrid gasoline vehicles—with the pollution equivalent to a gasoline vehicle getting 75 miles per gallon. In addition, people living in the Northeast can save $700 – $1,000 per year on gasoline costs by driving an electric vehicle.

“I’m pleased to say that the future is here for electric vehicles,” said Voorhees. “Given the price of a gallon of gasoline and the urgency with which we must reduce carbon emissions, that’s very good news for Maine.”