NRCM mourns the loss of one of our greatest leaders and earliest members, Bill Townsend

It is with great sadness that I share news of the passing of Clinton B. “Bill” Townsend, a tireless advocate for Maine’s environment for over half a century. Bill was one of NRCM’s greatest leaders and among our earliest members, joining the organization in early 1960, just a few months after the organization was formed. Bill died on December 8 at the age of 89 at his home in Canaan, surrounded by his family. 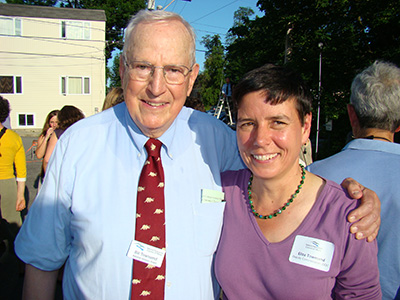 Bill and his daughter Eliza at NRCM’s 50th anniversary celebration in Augusta in June 2009.

Bill is survived by Louise, his wife of more than 60 years, children Ben, Meneely, and Eliza, and their families. He leaves behind many, many friends and a Maine that is far healthier and more protected than the one he first encountered when Louise and he moved their young family to the state in the 1950s.

At the time, Maine’s rivers were terribly polluted, with minimal levels of dissolved oxygen essential to support fish and other life. Bill worked along the Kennebec River and its condition was never far from him mind. It prompted him to pursue “a little piece in the Waterville Sentinel about the formation of the Natural Resources Council of Maine,” Bill recalled for a documentary about NRCM. “I had a telephone number  . . .  so I called the telephone number and it turned out to be a lawyer named Charlie Peirce in Augusta. The next time I was in Augusta, I stopped in to see Charlie and chatted with him. At that I was on the board of the Somerset County Soil and Water Conservation District, Charlie suggested that because it was a council at that point, that the district join as one of the council members and that I be their representative. I thought was fine and that’s what we did.” 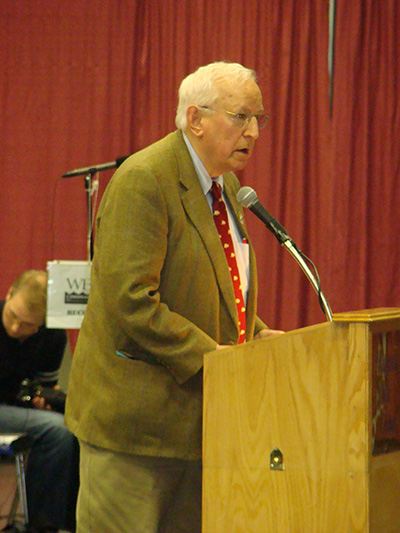 Bill became a giant in Maine’s conservation movement. A skilled attorney, he helped lead the campaign to create the Allagash Wilderness Waterway, a high point of river conservation in Maine and an early success of NRCM. He also helped to stop a dam at Big Amberjackmockamus Falls as well as the proposed Basin Mills Dam in the lower Penobscot watershed. Each of these structures would have caused irreparable harm to Maine’s fisheries. He gave generously of his time, wisdom, and resources. A kind man, Bill was also tough. He went toe-to-toe with Senator Ed Muskie over the proposed Dickey-Lincoln Dam and led many negotiations over the years to stop destructive practices and protect places at risk.

Bill followed Bob Patterson as president of NRCM’s Board of Directors, serving from 1965 to 1970, and was a member of the board for nearly three decades. He continued to advise the NRCM board, staff, and me, never hesitating to pick up the phone or take a meeting to help us work through an issue. He had been a board member of the Maine chapter of The Nature Conservancy, Maine Conservation Voters, the Atlantic Salmon Federation, and Somerset Woods Trustees, Maine’s oldest land trust. He most recently served on the board of Maine Rivers, a group he helped found.

And that is just some of the service he rendered. Bill also served the State of Maine in twenty different posts, including as a member of the Land Use Regulation Commission, Land for Maine’s Future Board, Whitewater Rafting Advisory Committee, and the Task Force on Water Pollution Control. President George H.W. Bush appointed Bill one of three American commissioners to the North Atlantic Salmon Conservation Organization.

Bill may not have been born with a fishing rod in his hand, but he likely grabbed one soon after the fact. He loved to fish and that passion drove much of his conservation work. But his love for the natural world was deeper than this avocation—Bill fought for clean water, clear skies, a toxic-free environment, rich habitat for our native wildlife, and access to the outdoors for Maine people and visitors to our state. Maine is a better place because of Bill, and so many of us are better people for having known him.