2016 People’s Choice Award presented to Stephanie Larouche, representing the Larouche family for the family’s commitment to wildlife protection and habitat conservation as well as environmental education for children and adults through the Hirundo Wildlife Refuge.

Eleven years ago, the Natural Resources Council of Maine created our People’s Choice Award to give NRCM members and activists a way to honor those in their communities who go to great measures to protect Maine’s environment. The response this year was tremendous. We received 21 nominations from across the state, and more than 600 votes were cast. We are grateful to all of these volunteers for the important work they are doing to help keep Maine a special place. Each of our four finalists received a certificate of recognition:

• Penny Asherman, of Cumberland , for her work to ensure the release of Land for Maine’s Future funding that had been withheld by the governor, and for her efforts to finalize protection of the Knight’s Pond parcel in Cumberland so that this land will be enjoyed by the public for generations to come;
• Gary Friedmann, of Bar Harbor, for leading efforts on Mount Desert Island aimed at helping MDI communities become energy independent;
• Peter Garrett, of Winslow , for his leadership in creating the Kennebec Messalonskee Trails and for his work as a member of several Central Maine coalitions working to address climate change; and
• Leda Beth Gray, of Blue Hill, for her passionate efforts to protect wildlife habitat and ecosystems, especially for birds and bumblebees, and for her considerable local contributions to national citizen science projects.

Thanks to everyone who nominated candidates and to all who took the time to vote. 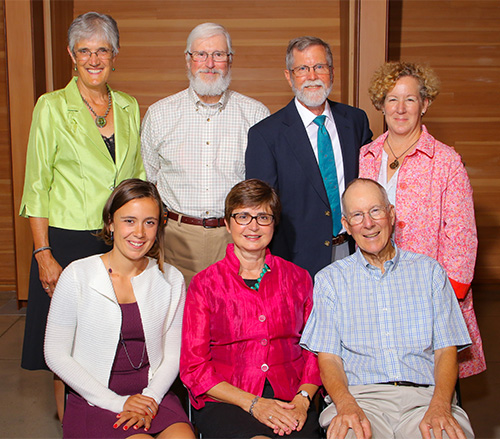 What got its start as a three-acre camp on Pushaw Stream now consists of more than 2,400 acres of conserved habitat acquired parcel by parcel over many years by the late Oliver Larouche. In 1983 the Larouche family deeded the land, in trust, to the University of Maine.

When Stephanie, Oliver’s niece, became board chair nine years ago, she decided that the need for environmental education was so great that Hirundo should change its mission from wildlife rehabilitation and passive recreation to an active educational facility. They recruited non-family board members experienced in education and wildlife to complement the existing members. Using funds from the trust, donations, memberships, and grants, a full-time employee was hired to guide programs and institutional development. Today, there is a full range of programs and activities for the public and schools, and off-site programs serve central Maine communities. Hirundo maintains more than seven miles of trails, many with interpretive signage. Canoes can be reserved for use on Pushaw Stream, free of charge. Universal access trails are in the planning stages with the aid of the National Park Service, and University of Maine professors continue to use the property for research and student projects. Although the Larouche family has dispersed geographically, they maintain a keen interest in Hirundo and its mission. On behalf of the Natural Resources Council of Maine, it is an honor to present our 2016 People’s Choice Award to the Larouche family.