Well over a decade ago, conservationist and philanthropist Roxanne Quimby announced an ambitious goal:  to create a new national park in Maine, just east of Baxter State Park. She is deeply committed to the idea that national parks are vital to protecting special places, engaging people in the natural world, and in spurring economic development. People protect what they value. Many Americans come to understand and value the wonders of the natural world because they learn about and visit our national parks. Through their family foundation, Roxanne and her children, Lucas St. Clair and Hannah Quimby, purchased several large parcels of land on both sides of the East Branch of the Penobscot River. They have been prepared for a long time to donate this land to the federal government. But creating a new national park is almost always a difficult process. 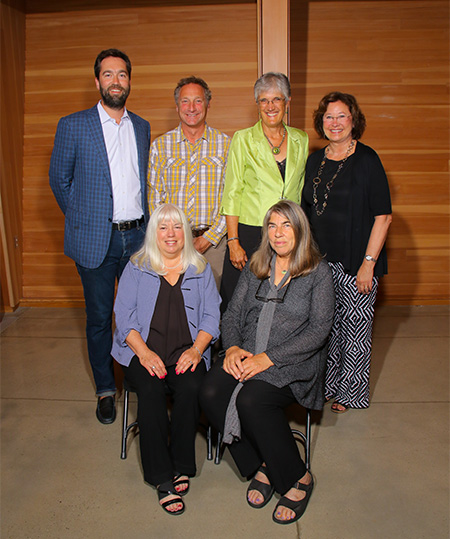 Five years ago, a campaign team was formed with Lucas at the helm. NRCM’s staff, led Forest and Wildlife Project Director Cathy Johnson, worked closely with Lucas and others to engage hundreds of people in discussions about the future of the land and of the Katahdin region.

In addition to the Quimby/ St. Clair family, NRCM is pleased to honor Katahdin area community leaders who have gone to extraordinary measures to ensure efforts for a national monument in their region were successful. Marsha Donohue, Gail Fanjoy, Anita Mueller, and Matt Polstein were among the earliest and most ardent supporters from the Katahdin region. They knew their businesses and, indeed the future of their struggling mill towns, were on the line. They stayed involved every step of the way. This monument could not have happened without their work.

They wrote letters, made phone calls, went to dozens of meetings, went to Washington, D.C., to meet with Maine’s Congressional delegation. Just as important, they talked numerous times to their friends and neighbors in the Katahdin region.

Local support for this proposal was essential, and these are the people who led that local support.

On August 24th, President Obama designated 87,500 acres east of Baxter, straddling the East Branch of the Penobscot River, as Katahdin Woods and Waters National Monument.  Within hours, the Park Service opened its office in Millinocket. Within days, more than 500 people picked up maps and asked the park ranger where they should go on their first visit to the land.

The people we honor today spent hundreds of hours working towards this goal. For Lucas, it was thousands of hours of meetings, presentations, back and forth rides to Millinocket and surrounds, phone calls, emails, snowmobile rides with opponents, fishing trips, flights to D.C. In every conversation, Lucas shared his love of the land—its mountains, streams, wildlife, forests, and ponds—and left no doubt that he and his family were sincere in wanting to see it protected forever.

Marsha, Gail, Anita, and Matt were equally passionate about the land, but also could speak to their local towns’ cultural heritage and hopes for the future. Maine could not have asked for better ambassadors for what is special about the Katahdin region or good about its people.

It is with tremendous admiration and thanks that the Natural Resources Council of Maine honors the Quimby/St. Clair family and the Katahdin area community leaders with the 2016 Conservation Leadership Award, for their generosity, vision, and commitment to creating the Katahdin Woods and Waters National Monument.