Conservation Leadership Award
For significantly improving access to nearly 2,000 miles of habitat for eleven species of native sea-run fish, with no net loss of hydropower

More than two centuries ago, members of the Penobscot Nation recognized the impact of early dams on Maine’s native sea-run fish. The impacts grew as the size and number of dams grew:  every year brought smaller fish runs. Often, the tribe was the sole advocate for the river, but eventually, there was a growing chorus of conservationists and outdoorsmen and women who were willing to start working on the health of the river and its fisheries. 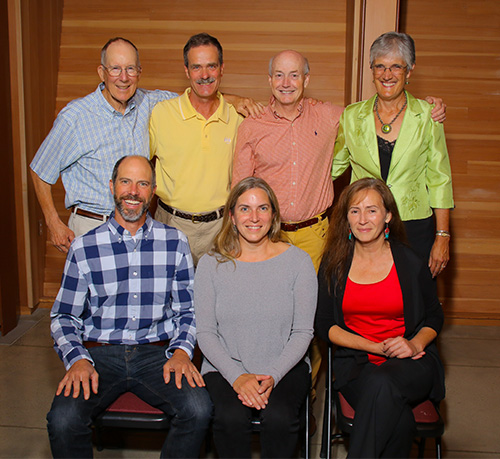 River activist and early NRCM board president and member Bill Townsend recently noted that it was more than 30 years ago that Bangor Hydro announced plans to construct a new hydro-electric dam at the Basin Mills site on the Penobscot River. Bangor Hydro also wanted to double generating capacity at the Veazie site. It quickly became apparent that the addition of a fifth dam on the main stem of the river would doom the prospect of restoring wild Atlantic salmon and other native fish to their historic habitat.

It took 10 years to block the building of the Basin Mills dam, but that effort—along with the removal of the Edwards Dam on the Kennebec—set the stage for the Penobscot River Restoration Project. The Penobscot Nation, NRCM, and our conservation partners tasked Laura Rose Day, who was NRCM’s watersheds director at the time, to manage negotiations with the new owner of the Penobscot dams.

Laura, John Banks of the Penobscot Nation, Andy Goode of the Atlantic Salmon Federation, attorney Ron Kreisman, and others on the negotiations team emerged four years later with an agreement that would significantly improve fish passage to nearly 2,000 miles of the main river and its streams. Eleven native species of fish would benefit—shad, tomcod, striped bass, and wild Atlantic salmon, among them. Some, like the shortnose sturgeon, would have access to all of their historic habitat in the watershed.

The Penobscot River Restoration Trust was created to purchase three Penobscot dams, remove two of them—Great Works and Veazie—and construct a nature-like bypass around the third dam in Howland. As part of the agreement, the dam owner committed to improving fish passage at the Milford Dam and increasing power generation at other dams in the watershed. This meant there would be no net loss of power. The price tag was steep—$60 million before all was done—but the environmental and economic outcomes would be enormous. And there is no price tag on the cultural and spiritual benefits to the Penobscot people.

The Great Works and Veazie dams are now memories. The fish lift at Milford worked overtime this spring, helping thousands of fish continue their migration upstream. And wild Atlantic salmon and other native sea-run fish swam up the Howland Bypass this spring and continued their journey to their ancestral habitat.

Many people and partners contributed to the success of this project:

It is still astounding to consider that nearly 2,000 miles of Penobscot River habitat has been reopened, with no net loss of hydropower. This project has become a model for river restoration all over the world. It is an honor to present the Penobscot River Restoration Project with our 2016 Conservation Leadership Award.