For many sporting camp owners and business people in the small community of Grand Lake Stream, the swift-moving and beautiful stream just south of town defines their identity and provides their livelihoods. For more than a century people have come from around the world to experience the pools and rips of Grand Lake Stream, ranked as one of Maine’s top five fisheries for landlocked salmon and trout. Few anglers could ask to fish in a more pristine setting – with bald eagles soaring overhead, and black ducks, mergansers, and golden eyes breeding along the stream’s banks in spring.

Grand Lake Stream’s fishing heritage is so strong that local residents took it as a given, a pillar that would support their small community well into the future. Then a paper company, which held lands on both sides of the stream, proposed building a 26-lot subdivision. That plan spurred formation of the Friends of Grand Lake Stream, an informal alliance of guides, sporting camp owners and fly fishermen committed to protecting their cherished resource. 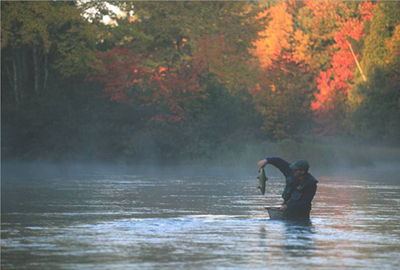 They joined forces with Maine Coast Heritage Trust, and negotiated with the paper company to acquire a combination of lands and easements that would preserve the stream in its undeveloped state. The planning and negotiations spanned three years, and could not have succeeded without extraordinary community participation and funding support from many sources (including the Land for Maine’s Future program, which contributed more than a third of the total project cost). More than 400 individuals contributed to the effort, alongside foundations, corporations and the town (Grand Lake Stream Plantation).

The Maine Department of Inland Fisheries & Wildlife now manages the 272 acres of riparian land in cooperation with local guides who volunteer their services to help minimize state expenditures on the property.

This conservation project helped the community of Grand Lake Stream learn the importance of land conservation to protect the natural resources that sustain the local economy. It later led to the founding of Downeast Lakes Land Trust by local residents. The Trust has led successful landscape scale conservation efforts around the village, including the Farm Cove Community Forest Project.