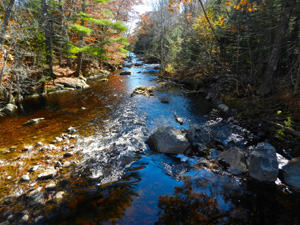 The Land for Maine’s Future (LMF) program has helped an ambitious effort to protect all the lands bordering the Ducktrap River, buffering critical salmon spawning and rearing habitat in one of the last eight rivers in Maine with runs of native Atlantic salmon. This land protection project has met with remarkable success, thanks to the persistence of those in the Ducktrap Coalition, a partnership of landowners, town officials, and environmental professionals working collaboratively to protect the river. As of December 2003, the Coalition had succeeded in securing 82 percent of the land bordering the river through donations or purchases of easements and land. Including other lands protected beyond the river, 23 percent of the Ducktrap watershed has been conserved. 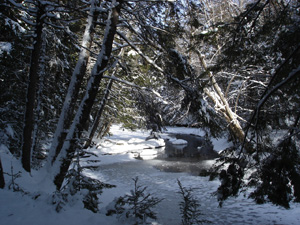 Grants from the LMF program helped Coastal Mountains Land Trust (which spearheads the Ducktrap Coalition) purchase 1.4 miles of river frontage in two separate parcels. One of these properties is now managed by the Maine Department of Inland Fisheries and Wildlife, and one has become part of Camden Hills State Park. Both parcels abut the 1,114-acre Ducktrap River Preserve, which is managed by Coastal Mountains. The connected conservation area, with mature stands of pine, oak and hemlock, offers hikers and skiers a chance to enjoy trails that parallel the Ducktrap as it tumbles past boulders and glides under overarching trees on its way to Penobscot Bay.

The protected lands along the Ducktrap help to maintain the scenic qualities and natural character of the Tanglewood 4-H Camp (which lies along the river), a site used by a broad spectrum of children and adults for educational and recreational pursuits. These two projects, and the larger Ducktrap Preserve, were protected with support from many donors and grantors, including local citizens, the National Fish and Wildlife Foundation, MBNA Foundation, Maine Community Foundation, and the LMF program.

Directions from nearest town
DeLorme Maine Atlas and Gazetteer, Map 14, C-4. The conserved parcels can be reached from two locations. To enter from Tanglewood 4-H Camp and Learning Center, take Route One north from Lincolnville Beach 1 mile, turning left onto Ducktrap Road. Go 1 mile and turn right onto Tanglewood Road, proceeding one mile to the trailhead parking area. The other entrances to the Ducktrap River Preserve are off of Route 52 in Lincolnville, 3.5 miles north of Lincolnville Center (just after crossing the Ducktrap River).