Fast-growing residential growth along Casco Bay has fragmented and destroyed much wildlife habitat. For the species that remain, the undeveloped islands in the eastern Bay provide a critical resource. The Land for Maine’s Future (LMF) program has helped to protect three of these islands: 11-acre Mark, 27-acre Flag, and 125-acre Whaleboat.

Mark Island is one of the most valuable seabird and great blue heron nesting islands in southern Maine. Its shores support eider and gull nests while its windswept trees are home to black-crowned night herons, great blue herons, and the northernmost snowy egret population in New England. The Nature Conservancy purchased the island and transferred it to the Maine Department of Inland Fisheries and Wildlife for long-term management.

In 2001, seven organizations and agencies managed to save Flag Island when its sale on the open market threatened to displace the 600 pairs of eider ducks that nest there. Flag is among the top-ranked nesting eider islands in all of Maine, and the largest in Casco Bay. Funds for the conservation purchase came from the LMF program, the U.S. Fish and Wildlife Service’s National Coastal Wetlands Conservation Program, Maine Outdoor Heritage Fund, Casco Bay National Estuary Project, Maine Coast Heritage Trust, and two oil spill compensation funds. IF&W now manages Flag Island. 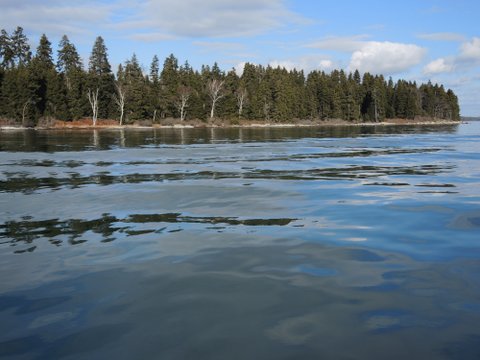 Seabird-nesting islands like Mark and Flag are only accessible outside of nesting season (which runs from April 1 until September 1), because human visitors can disrupt the birds and inadvertently lead to predation of the eggs or chicks. However, passive recreation can be enjoyed throughout the summer on Whaleboat Island, Casco Bay’s largest remaining undeveloped island, found in the western part of the Bay. Generations of local residents have come to picnic and walk on the 125-acre island. The long-time owners who had graciously allowed that use wanted to see the island conserved and agreed to sell the island to MCHT for a price below its appraised value. More than 170 community members successfully raised funds for the purchase, with support from MCHT, Harpswell Heritage Land Trust, Cumberland Mainland and Islands Trust, and the LMF program.

The map marker below points to Whaleboat Island.

Put these coordinates into Google maps to find the other two islands: