Maine’s Congressional delegation has before them the chance to build and pass the most important piece of climate legislation ever seen in the United States. This opportunity comes at a time when the latest report from the world’s leading climate scientists signaled a “Code Red for Humanity” – time is running out and immediate, bold action is essential.

In August, both the U.S Senate and House of Representatives passed the Build Back Better Budget resolution, a framework including some of the most important federal climate policies proposed in Congress in years. Although the detailed budget plan is being negotiated and assembled right now, we know from the bill’s policy outline (PDF) that there will be big benefits to states like Maine.

This is a once-in-a-lifetime opportunity for Maine’s Congressional delegation to support the kind of ambitious climate action bipartisan majorities of Mainers have already made a priority.

Here in Maine, we’re already leading on climate. Bipartisan majorities in the Legislature and Governor Janet Mills have enacted emissions reduction goals and dozens of new clean energy laws. The strategies outlined in the state’s new Climate Action Plan, “Maine Won’t Wait” (PDF), will cut harmful carbon pollution, build new affordable clean energy sources like solar and wind, provide healthier transportation options, and create thousands of good jobs. These are ambitious targets, and our Congressional representatives have pledged to help us meet them. This is their chance.

Several pieces of the Build Back Better Budget directly support Maine’s Climate Action Plan. The federal and climate teams at the Natural Resources Council of Maine worked together to analyze how it stacks up: 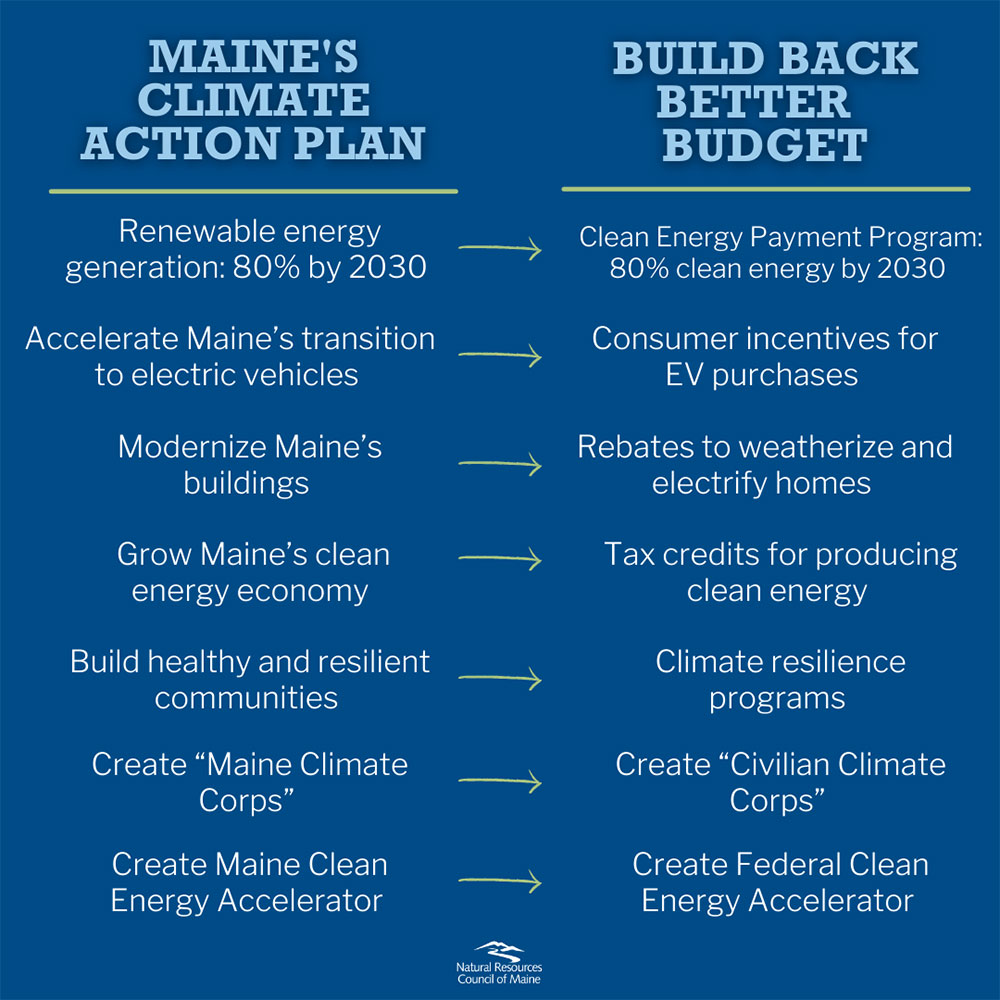 The biggest obstacle to the climate action we need isn’t that we don’t know what to do. It’s about doing it at the speed and scale necessary to avoid climate impacts. The federal budget bill is the first bill in more than a decade that recognizes that urgency. Just this week, a Senate staff analysis found that the investments in the bill, including policies from leading states like Maine would put us on the path to reducing our country’s carbon emissions by 45% below 2005 levels by 2030 — aligned with what we need to avoid the worst impacts of climate change.

Here’s a little more detail into the provisions and how they will help Maine:

In 2019, Maine updated our Renewable Portfolio Standard, or RPS, with a goal of having 80% of our energy come from renewable sources by 2030.

Transportation accounts for more than half of Maine’s carbon emissions, so electrifying our cars and trucks while cleaning up the grid is a top priority. Maine Won’t Wait has a goal to put 41,000 zero-emission electric vehicles on the road by 2025, and 219,000 by 2030.

Heating, cooling, and lighting buildings is a significant source of Maine’s carbon pollution.

The similarities don’t end there.

And the bill goes further, making other key investments in cutting pollution, investing in greener agriculture and forest ecosystems, reducing inequality and impacts in disadvantaged communities, and more.

We’re fortunate that so many of Maine’s elected leaders recognize the enormous opportunities the transition to clean energy represents for Maine. It’s vital that in this critical moment they stand together and do not let this golden opportunity pass by. Across party lines and across the state, Mainers have put a Climate Action Plan in place, and the bill being assembled in Congress right now would match and support that ambition.

The people of Maine have declared that “Maine Won’t Wait” to act on climate. Congress shouldn’t either.