Your Stories from the Allagash

We asked, and you answered! Thank you to everyone who sent us their stories and photos from the Allagash Wilderness Waterway in celebration of the 50th anniversary of it being designated a Wild and Scenic River. These are wonderful tales and, in some cases, utterly wild. Enjoy!

“If you have made several trips on the Allagash, you have can count at least one misadventure in your experiences. My big misadventure came in the late 1970s and involved high water, an aluminum canoe, and a very large rock. My paddling companion and I were in a group of eight. Days of heavy rain had raised water levels in Chase Rapids, so we had a fast ride all the way to the big eddy. We all took a rest, the group took oﬀ, with our canoe bringing up the rear, some distance behind the rest. Leaving the big eddy, a bit carelessly, we were caught in a current sweeping around a high rock. Struck the rock. Tipped upstream, and the canoe ﬁlled with water. The aluminum canoe stuck tight to the rock, bent, and held fast by the current. Perfectly balanced. We couldn’t free it so swam to shore for a hike downstream to meet our friends. Those balsam ﬁr and spruce are not pleasant glades. They are a tangle. In short, they are wilderness. We found our friends and with added strong arms and ropes freed the canoe. Some wrenching, pounding, and duct tape got us back on the water for the rest of the trip.

“Lessons of the day: polish your skills and don’t be careless; avoid aluminum canoes in whitewater.

“And don’t include a stroll in the wilderness along the edge of Chase Rapids; it is better enjoyed from the water, in an upright canoe.”

“I was born in Augusta but grew up in Readfield. My dad Harold Clark, Bill Dunham from Manchester, and George Mendall from Sidney, got together and took us on our first trip down the Allagash in 1957. That is the one ’57 picture of us all standing on the rim of the falls. Around 1992 I took my sons down the Allagash. Those are the other pictures of us diving into Allagash Falls, portaging around Allagash Falls, and coming out of a big rain on the Allagash.” 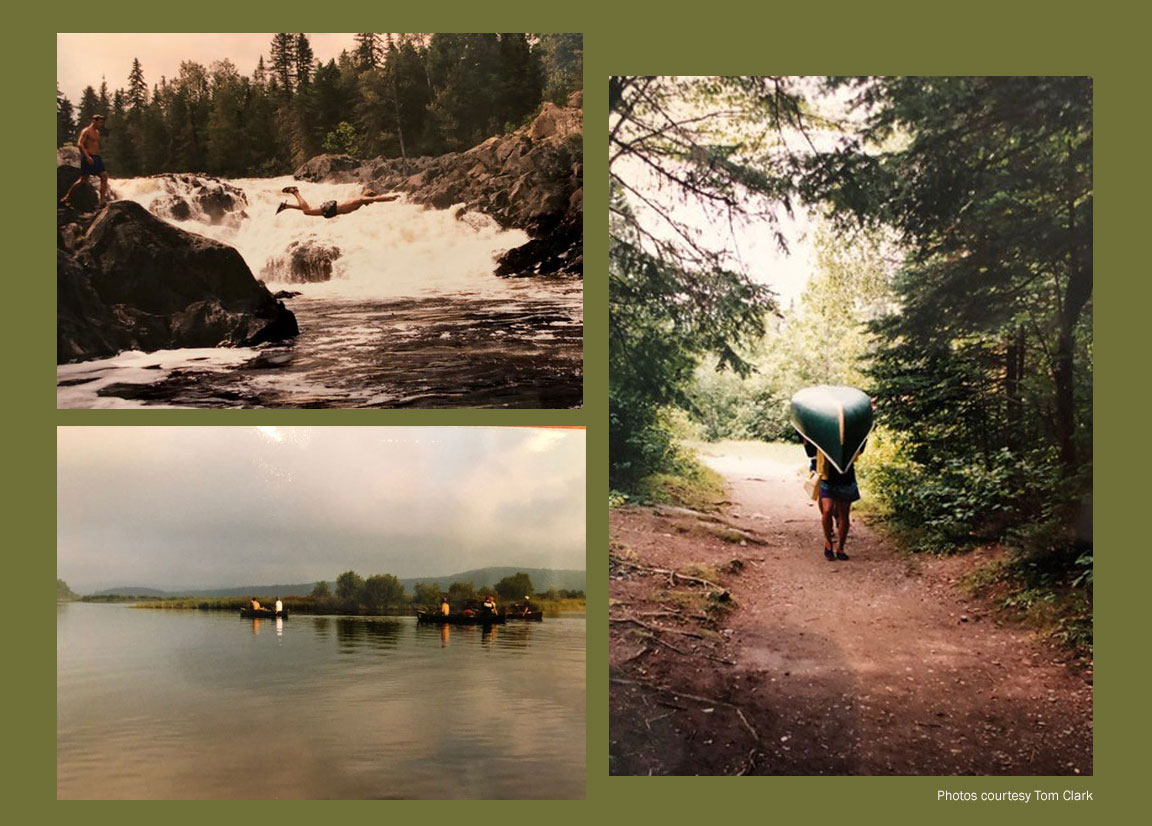 “Something ancient and alchemical happens on a wilderness waterway. What we call news disappears. The word ‘media’ sounds more like a song than a klaxon. Our bodies bask and bend, and minds follow. A pure, universal solvent dissolves facts and transmutes elements. In spruce and eagle we sense our wild genetic roots. Water and air and rock concoct a rapids, an elixir to drink in at dusk. The best transcendence? We do not seek or preach perfection. It merely happens.”

—Jim Krosschell, an excerpt from Elements of the Allagash

“I remember my first time on the Allagash in late May of 1974, two days after ice out. Even if the Natural Resources Council of Maine never had another victory (and you have had and will have many more) it was worth the effort to preserve this splendid area!” 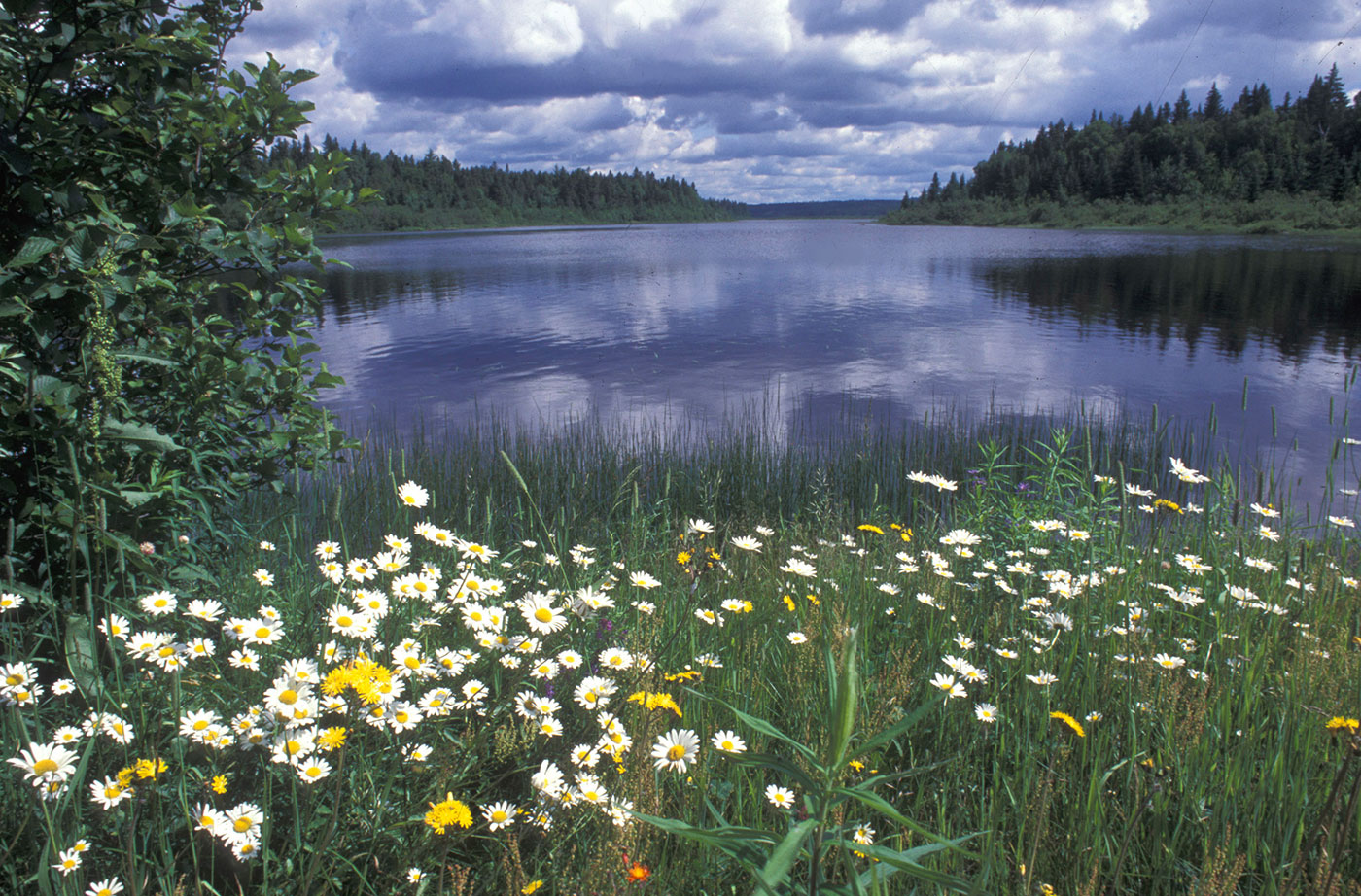 “Here are several somewhat worse-for-wear photos from the canoe trip, Greenville to Fort Kent, that I made with a good friend from college in the last ten days of August 1963.

“What made this trip most memorable for both of us was the satisfaction of successfully navigating a variety of challenges, some anticipated, many not. What do you do when heading up Moosehead Lake’s North Bay to Northeast Carry with a strong following wind and huge following waves and realize you are shipping a little water as each wave rolls under, and you are not going to make it? You take shelter in coves and the mouths of streams to bail. What do you do when you discover the tent from your Boy Scout days leaks when it rains and lets in hordes of mosquitoes?  You jerry-rig a tent from two ponchos and a tarp. What do you do when you plan to run the Allagash and you have no previous whitewater experience? You practice reading the water ahead and making split-second decisions while running the gentle rips on the West Branch. What do you do when, late on a Monday afternoon, you discover an overturned canoe in a quiet bay of Chamberlain Lake and there is a drowned man whose foot is entangled in a rope attached to it? Suffice to say, news travels fast, even in the North Maine Woods.

“There were, of course, days when we did not see another human being, just the occasional shy moose and the definitely-not-shy Canada Jays. But William Luckner of Monroe, Connecticut, drew a crowd. When we arrived back at the scene Tuesday morning, two people in a large motor launch had already arrived from across the lake and had already pulled Mr. Luckner from the water and laid him face down on the deck. Folks who lived in various spots on the lake formed a flotilla of a dozen or so small boats clustered around the launch. One man volunteered that he had seen Mr. Luckner fishing last week at the head of the lake. He had spoken with him: ‘Said he had to be back in Connecticut on Monday.’ Two wardens arrived in their bright blue boat. And then the coroner and a companion from Greenville arrived in a floatplane to get our signatures on the death certificate and take Mr. Luckner back to Greenville in a rubber bag lashed to one of the pontoons. After our experience on North Bay, and having spent most of the previous weekend waiting out a nasty storm, snug and dry in our ‘tent,’ on the shore of Umbazooksus Lake, we understood exactly the dangerous mistakes Mr. Luckner had made.

“When we returned the 17-foot Grumman canoe we had rented, the owner got angry when we mentioned we’d been on the Allagash. ‘If I had known you were going there, I never would have rented you the canoe.’ But after he carefully inspected both sides, said, ‘Wow, you guys must be good!’

‘We replied modestly, ‘We had a good time.’ We didn’t mention we had used two-by-fours to pound out the many dents the canoe had suffered in Chase Rapids.” 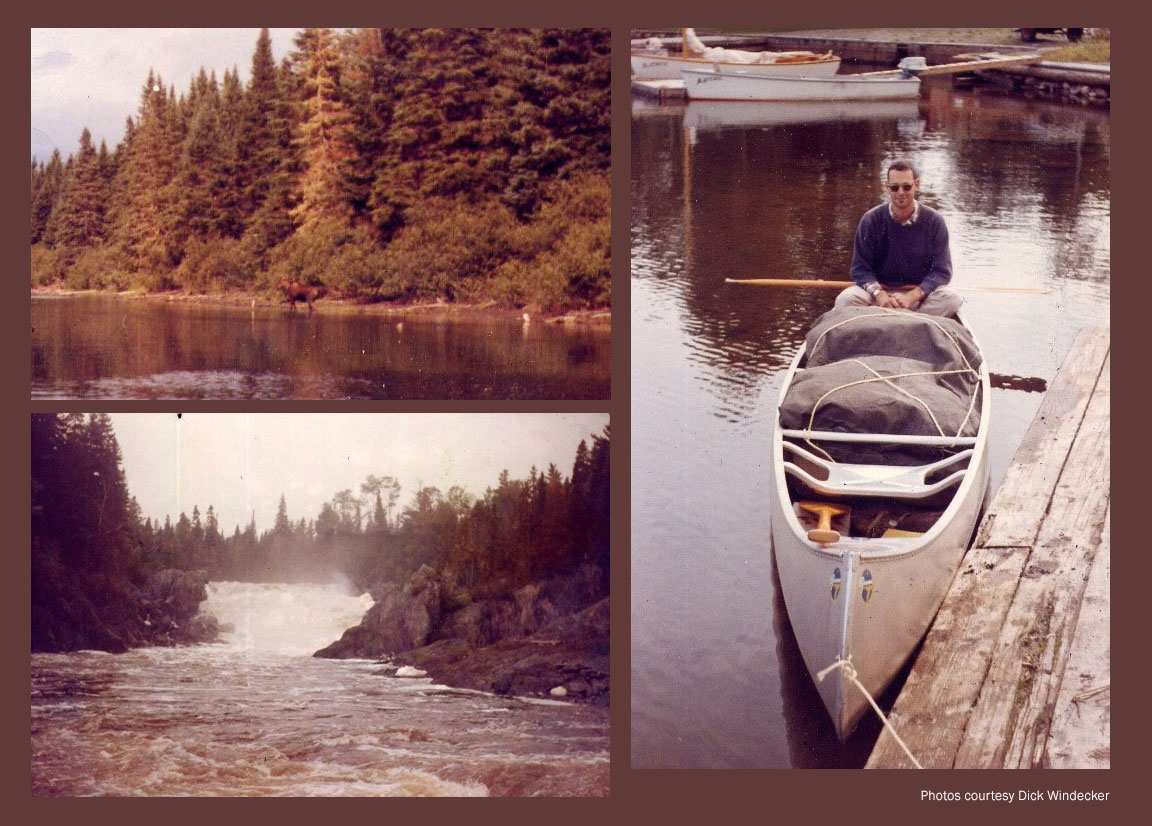 “In 1965, 15 boys and one counselor from Camp Modin put in at Telos Lake for an eight-day canoe trip to the town of Allagash. There was no Allagash Wilderness Waterway, and there was no one to check us in or monitor our progress as we made our way North…

“We camped wherever we found a suitable spot each night and reveled in the beauty of nature as we progressed up the river. These were truly the ‘wild days’ on the Allagash. If you had a problem or any type of injury, you were on your own.

“I look back on that trip with amazement and wonder. I remember every detail of that trip and how exciting it was to be one with nature. I was a 17-year-old kid then but the beauty, remoteness, and pristine beauty of those eight days is as vivid now as it was then.

“I have not been back to the Allagash since 1965 but I make it a point to return to Maine every summer from Ohio to buoy my spirits and drink in the unchanging beauty of the state.

“The gift of that trip in 1965 has stayed with me all these years, and I am grateful that the Allagash has been protected for future generations.”

“In the summer of 1972, when I was 12, my parents, aunt, uncle, and cousin, and family friends with their daughter, canoed the Allagash from Indian Pond Stream to the takeout in Allagash Village. Here are two very vintage pre-Instamatic photos of mine from that seminal trip. I am the blond in the center of the canoe shots. Campsites are Round Pond and the head of Chase Carry Rapids as well as Allagash Falls. In 1990, I accompanied that same uncle in memory of my Aunt Emily who had died the year before. I will admit we spread some ashes in Round Pond a place she loved dearly. I hope to get back up there soon with my husband. Thirty years is too long!” 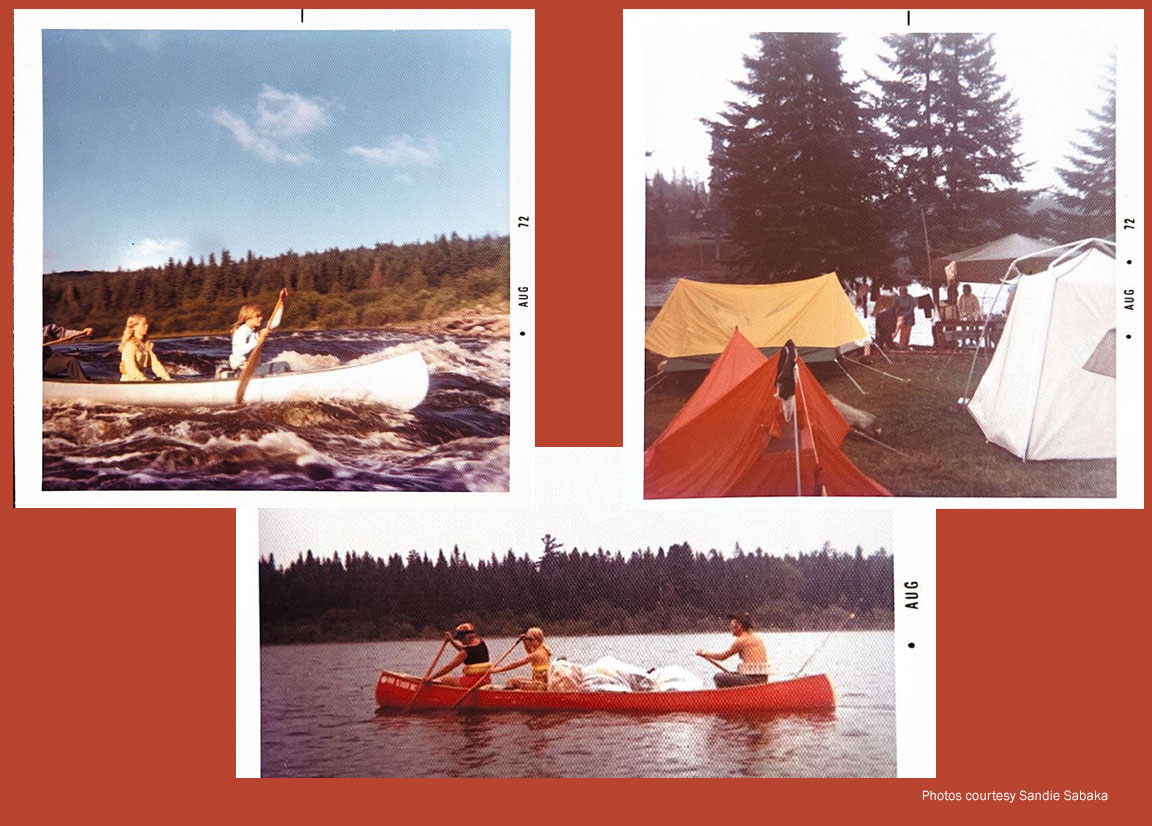 “It is truly amazing to me to be celebrating the 50th Anniversary of the Allagash Wilderness Waterway. Of course, this gem has existed for generations upon generations.

“But when I paddled it in the summer of 1970, as a 15-year-old, little did I believe that in fewer years than in my own lifetime generation, its beauty and splendor would remain preserved for countless others to experience. We were then, after all, just becoming broadly aware of how fragile and vulnerable the earth’s natural treasures were in our often careless hands.

“There is great hope and gratitude in this anniversary. It is proof of our ability to honor and save the natural beauty we were given here in Maine, and well beyond. Likewise, it is a beacon of clear and just light, that highlights the connection between people and the land, and the need to be vigilant and supportive of each and every human’s pursuit of freedom and happiness, here and  throughout the world.”