Yellowlegs and the Year of the Bird

The fact that we can hear the calls of yellowlegs echoing around our favorite cove here in Maine as the tide recedes on a warm, late-summer evening is thanks to the forethought and persistence of bird enthusiasts a hundred years ago. They ushered through the Migratory Bird Treaty, and then the legislation to enact it in the U.S. and Canada. The Natural Resources Council of Maine joins many other organizations—National Audubon, Cornell Lab of Ornithology, National Geographic, and many others – in celebrating this important act this year, the Year of the Bird. 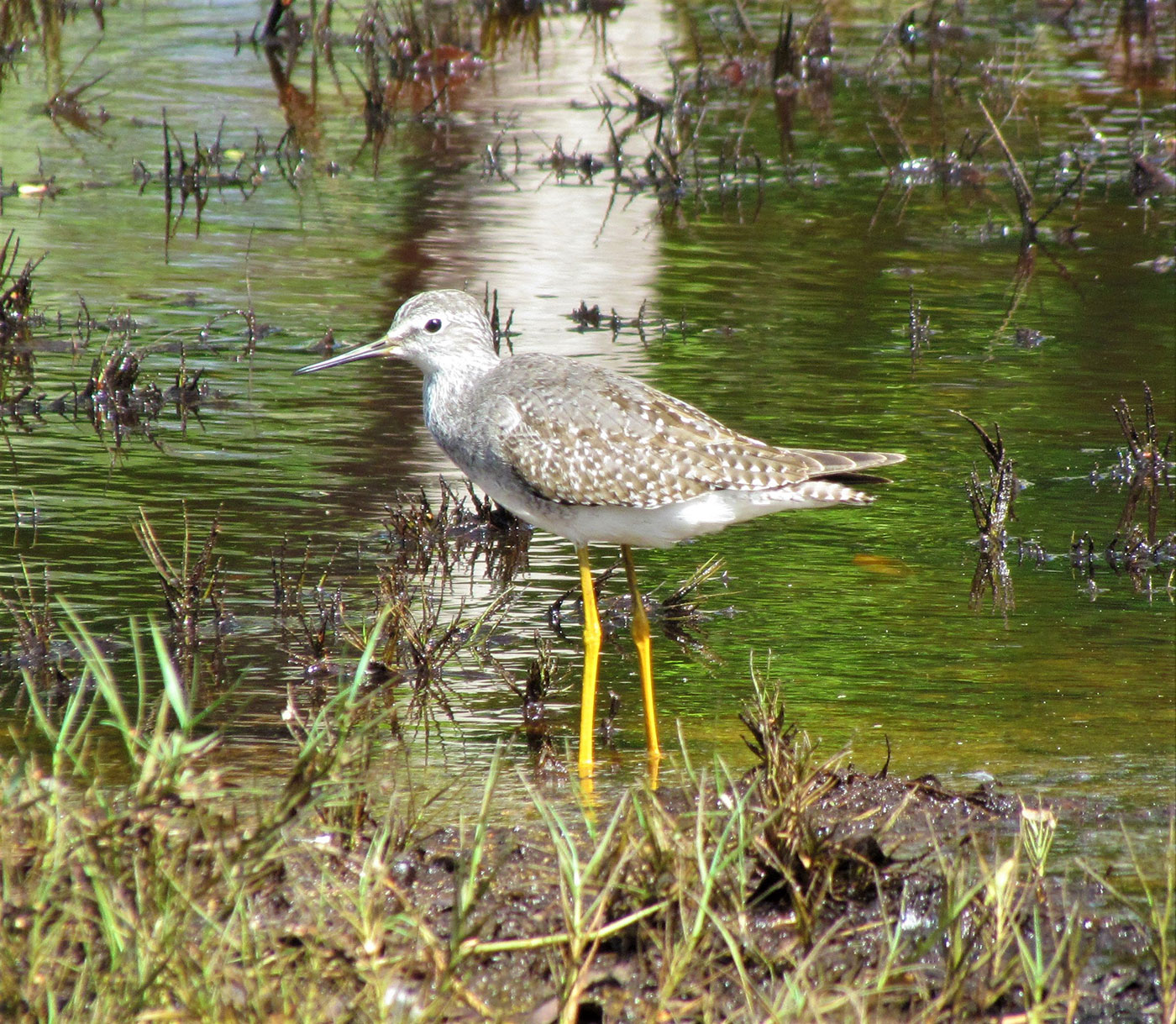 Thanks to the Migratory Bird Treaty Act, the site and sounds of Lesser Yellowlegs and other species once brutally hunted can be heard today and will be for generations to come. (Photo by Jeff Wells)

There are few birds so well named as the two species of long-legged sandpipers called the “yellowlegs.” Their bright yellow legs are especially noticeable, contrasting as they do with their otherwise gray and white plumage. Their full names are also descriptive: the larger of the two yellowlegs species is called the greater yellowlegs and the smaller, the lesser yellowlegs. Both species are among a small set of birds of the sandpiper family that nest south of the Arctic in the Boreal Forest region of Canada and Alaska.

How are these two species, that look so similar, actually different?

Greater yellowlegs nest less than 400 miles north of Maine’s Midcoast region, occupying much of the Boreal Forest region of Quebec and east to Newfoundland and west all the way to southern Alaska. Lesser yellowlegs nest a little farther north (about 650 miles from us), reaching northwestern Quebec around James Bay and with the breeding range extending west to interior Alaska. Both species nest on the ground, often in or near bogs, and lay clutches of 3-4 eggs.

Both species arrive as early as April on the Maine coast after wintering somewhere between the southern U.S. and South America. As if to make the point about the importance of NRCM’s work protecting Maine’s environment, including coastal estuaries, the birds continue north to the breeding grounds. Amazingly, good numbers of yellowlegs begin arriving back along the coast of Maine on their way south in July. The ringing “tu-tu-tu” calls of the greater yellowlegs become a familiar sound if you are near the water in July and August.

Sadly, those same sounds were once eagerly awaited by commercial bird hunters. Thousands of yellowlegs were taken by market hunters along the coast of the U.S. during their migration periods. Using big “cannon” guns, it was sometimes possible to kill dozens and occasionally as many as 100 in a single shot. These and other shorebirds, including golden and black-bellied plovers, and the now-extinct Eskimo curlew, were commonly available in markets and sometimes in restaurants. Hard to imagine today, thankfully.

The slaughter stopped when the Migratory Bird Treaty Act became law in 1918. Only limited shorebird hunting was allowed after that, and soon the hunting of all shorebirds except American woodcock and Wilson’s snipe was banned. Most shorebirds saw a rebound in populations after this, although numbers of many shorebird species are thought to have declined again in recent decades. Shorebird hunting still occurs in parts of the Caribbean and perhaps in South America but today’s declines are more likely the results of habitat loss and degradation, pollution, and contaminants.

In 2018, the Year of the Bird, we remember the conservation pioneers that worked so hard to protect birds that, like so many species, could have been lost forever. Today, we thank these special people, and enjoy the birds they themselves enjoyed so much.