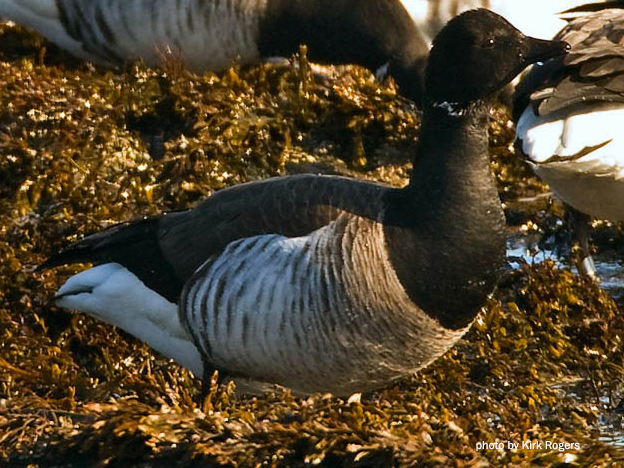 Every winter, a few of the tiniest of geese spend the winter along the Maine coast. These geese, called Brant, are another of the species that we celebrate in the Year of the Bird because, if not for the passage of the Migratory Bird Treaty Act in 1918, they might not be with us anymore.

Brant were the target of market hunters back at the turn of the century. Hunters used cannon-like guns mounted on the fronts of boats and killed massive numbers of birds to ship to markets in New York, Philadelphia, Baltimore, Washington, and other cities. The passage of the Migratory Bird Treaty Act stopped all that, and the populations rebounded, thankfully, because our littlest goose lives a really big life.

Brant are an unusual goose in a number of ways. They are a strictly coastal species, only occurring inland in rare circumstances, typically when grounded by bad weather during a long, overland migratory flight. Brant are highly dependent on a particular kind of saltwater plant, called eelgrass, for food. Their winter distribution, in fact, shows almost complete overlap with the distribution of eelgrass. In the 1930s a disease wiped out much of the eelgrass along the Atlantic Coast, resulting in a severe die-off in the Brant population there.

Brant have a circumpolar nesting distribution and are the goose species that nests the closest to the North Pole. There are different forms and populations that nest in different areas, and they travel completely different routes to widely separated wintering areas. In North America, the easternmost population (which also nests the farthest north of any of the Brant populations) is found nesting in the Queen Elizabeth Islands. After nesting, these birds fly south to James Bay for feeding, then later in fall to the coast of Greenland for more resting and feeding. They make another amazing migration journey after that, to Iceland for a stop-over before eventually making their way to Ireland where they spend the winter!

Likewise, our Atlantic Coast Brant are no slouches when it comes to migration. They, too, nest in the Arctic, south of the Ireland wintering population, principally on Southhampton and Baffin Islands north of Hudson Bay. These birds drop south after nesting, to James Bay to feed and rest in the fall. From James Bay they will sometimes make an astounding nonstop overland flight of 1,500-1,800 miles to reach their wintering grounds along the mid-Atlantic Coast. In the spring, some birds take the same overland route back north while others follow the coastline around New England and Maritime Canada.

Here in Maine, we tend to see Brant in somewhat higher numbers during these spring and fall migrations. It’s possible to see flocks numbering in the dozens, with occasional sightings of more than a hundred in spring.

Coastal New Jersey is the winter home of the bulk of the wintering population of Atlantic Coast Brant, with about 70 percent of the population typically occurring there in the state’s extensive salt marshes. Another 20 percent occur in the salt marshes of New York’s Long Island. We have wonderful memories of watching and listening to the chuckling, high-pitched calls of Brant at places like Brigantine National Wildlife Refuge near Atlantic City, and in New Jersey, and at Jamaica Bay Wildlife Refuge in New York, with planes taking off in the background from nearby JFK airport.

Brant populations continue to have their ups and downs following disasters like the eel grass die-off of the 1930s and a mid-winter deep freeze in the 1970s that killed half of the Atlantic Coast wintering population.

But without the protections of the Migratory Bird Treaty Act, which we celebrate in 2018—the Year of the Bird—Brant populations might not have been able to sustain these natural stresses and bounce back to remain part of our world and the natural heritage that we pass on to our children and grandchildren.