As we near the end of the 2018 Year of the Bird celebration that commemorates the 100-year anniversary of the famed Migratory Bird Treaty and its implementing legislation in the U.S. and Canada, it is well that we think of the future of a bird like the Pine Siskin whose populations know no human political borders. Yet, this species relies on strong environmental policies, including those supported by the Natural Resources Council of Maine, that help ensure its long-term survival, which, despite appearing in Maine with regularity during so-called “irruption years,” have suffered serious declines. First, a little about Pine Siskins.

Pine Siskins are one of the three bird species in North America with the word “pine” in the name. Only one of these, the Pine Warbler, is a bird that is tightly associated with pine trees—in spring, their trill can be heard many places where there are those quintessential Maine pine trees—city parks, ball field perimeters, backyards, forests. But neither Pine Siskins nor Pine Grosbeaks (as we have written about before) inhabit pine-dominated forests, at least in most of their northern breeding range. Instead they are more likely to be found in forests with large components of spruce, larch, and fir as one finds in the Boreal Forest of Canada and Alaska. 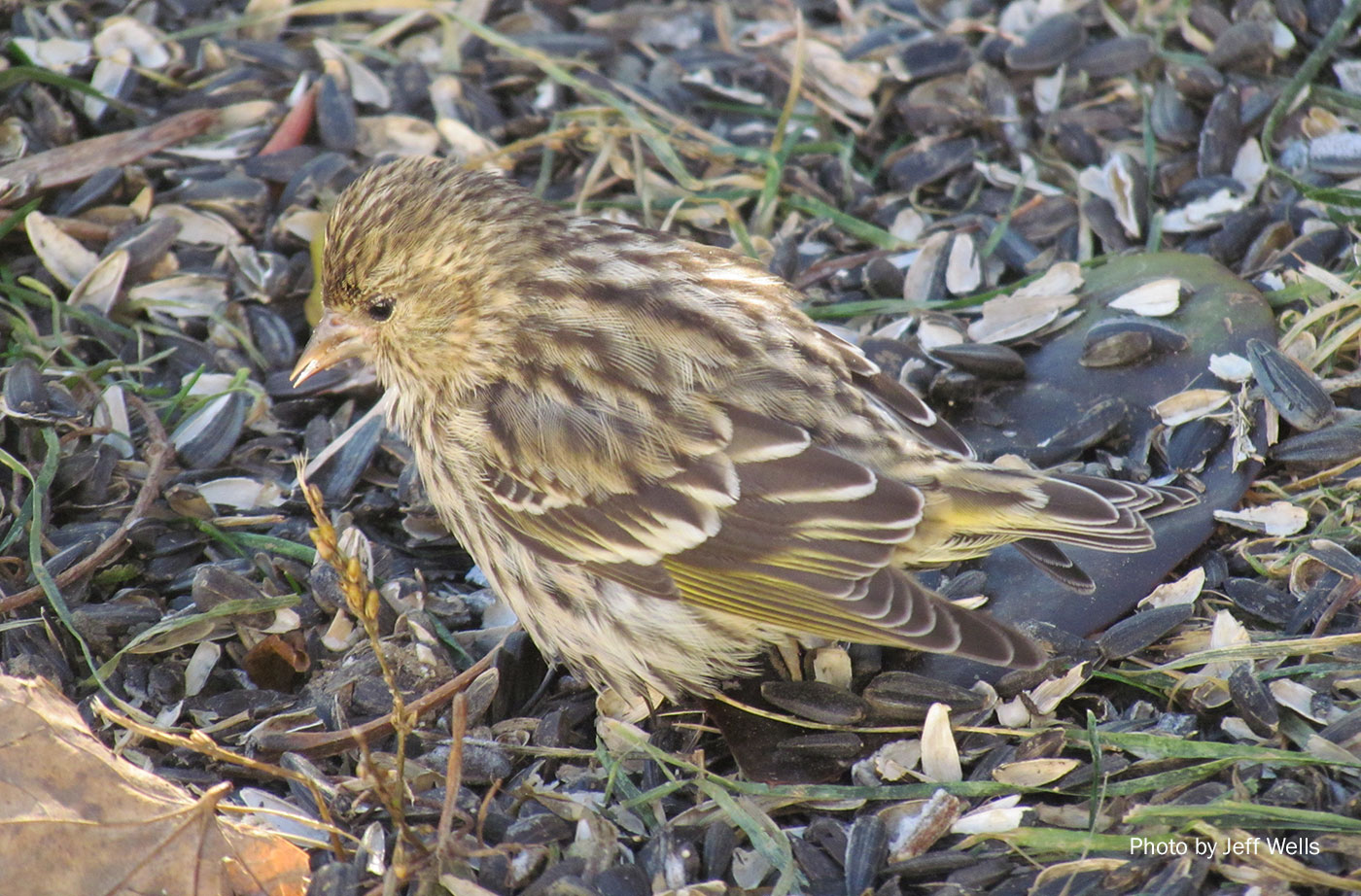 And while they will eat the seeds of some species of pines, they are more likely to be seen eating the seeds of spruce, fir, cedar, hemlock, and larch, as well as seeds from the catkins of alders and birch, and seeds of grasses, goldenrods, asters, and many other plants. Their food preferences also include, when available to them, the sunflower seeds and thistle seeds provided at backyard feeding stations, which is how we get our best looks.

Pine Siskins are, like Common Redpolls, Evening Grosbeaks, and other northern finches, birds that exhibit regular patterns of southward fall and winter incursions that ornithologists have termed “irruptions.” Siskins are one of the species that tend to show these “irruptions” southward about every two years.

This year is one of those irruption years for Pine Siskins, and the pattern was evident as early as October across much of the northern U.S. Here in Maine, we and many others had Pine Siskins at our home feeding stations regularly in October and November. One particularly ambitious (or at least hardy) Pine Siskin made it out to the remote island of Bermuda in October. The widespread movement of siskins across the continent has continued, with birds reported to eBird now as far south as Ft. Myers, Tampa, and Orlando in Florida, and Corpus Christi in Texas.

The irruptions of siskins are thought to be the result of a good breeding season building up large numbers that are then faced with a food shortage in the northern range that leads to a mass exodus to the south in search of food. It seems that climatic factors must operate over vast areas of the breeding range to cause two-year spikes in the abundance of food for feeding young such that the siskin populations can see a boom. At least one study has found a link between the regular irruptions of Pine Siskins and the broad global climate cycles described as El Niño and La Niña, though exactly how they may have this effect is unknown.

Pine Siskins are considered an abundant bird, but a recent Partners In Flight assessment found that North American populations had declined in numbers by more than 80% since 1970, ranking them officially as a Common Bird in Steep Decline. While the exact reasons for the decline are little understood, it is clear that the bulk of its breeding range in the southern portion of the Boreal Forest of Canada has seen massive alterations as a result of industrial-scale forestry activities over tens of millions of acres.

With the season of giving upon us, we hope you will consider supporting policies, activities, and organizations that conserve habitat for birds and work for legislation that protects birds and wildlife on both sides of the border. As a reader of this blog, you know the Natural Resources Council of Maine has led the way on some of our state’s most important policies. We know that our membership dollars are put to good use at NRCM. As our Year of the Bird blog comes to a close, we hope you will become a member of NRCM right now, to ensure that protections for birds and wildlife continue long into the future.

Jeffrey V. Wells, Ph.D., is a Fellow of the Cornell Lab of Ornithology. Dr. Wells is one of the nation’s leading bird experts and conservation biologists and author of “Birder’s Conservation Handbook”. His grandfather, the late John Chase, was a columnist for the Boothbay Register for many years. Allison Childs Wells, formerly of the Cornell Lab of Ornithology, is a senior director at the Natural Resources Council of Maine, a nonprofit membership organization working statewide to protect the nature of Maine. Both are widely published natural history writers and are the authors of the book, “Maine’s Favorite Birds” and the newly published “Birds of Aruba, Bonaire, and Curaçao” from Cornell Press.