Our cats love to be groomed. This is a very good thing, especially this time of year when they both are shedding profusely. We, too, find it a satisfying experience: better to catch that fur with a comb than to see it plastered on the furniture and tumbling in clumps across the floor like tumbleweeds. 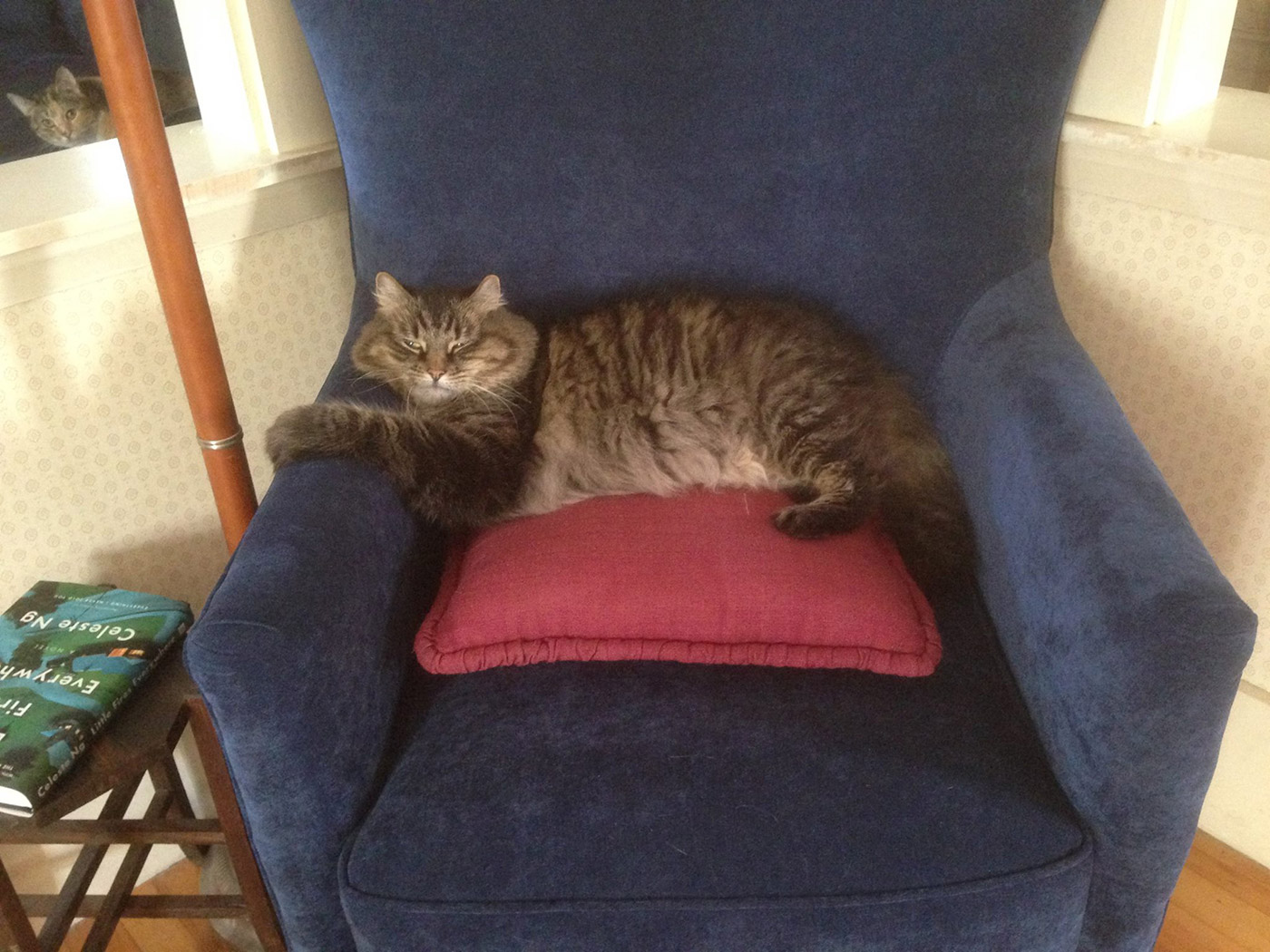 Our fluffy Maine coon cat Jack, relaxed after a nice grooming – an activity he and Rascalia (photo bombing, upper left) both enjoy.

This spring, grooming our kitties has taken on a higher purpose in the Year of the Bird—a time for celebrating the immeasurable contributions and importance of the Migratory Bird Treaty Act , established 100 years ago this year.

That because it’s not only the Year of the Bird, it’s also year of the Maine Breeding Bird Atlas (and will be for the next five years). This project, run by the U.S. Fish & Wildlife Service, maps the distribution of breeding birds in a particular area, including Maine. Thus we are finding ourselves glued to watching the drama of the social lives of our local birds. In particular, we’re spying in hopes of catching a glimpse of some behavior that would allow us to confirm that the bird species in question is indeed nesting and raising young. Of course, we’re most carefully scrutinizing the breeding bird atlas block where we live, since we can watch the birds of often and closely as we engage in our everyday activities.

Last week we noticed a Gray Catbird, having just arrived within the week, gathering material to build a nest. The bird had found a small piece of plastic from somewhere in the neighborhood and was carrying it off to its hidden nest site, probably deep in a tangle of bushes, as they typically prefer. That sighting confirmed Gray Catbird as breeding in our atlas block.

It also got us thinking more about what birds use in their nests.

We decided to help while also possibly make it easier to confirm more breeding birds in our atlas block by providing something safer than plastic for a bird to use in its nest: cat hair! We loved the irony of the idea of offering up to the birds the hair from our indoor-only cats (kept inside precisely to protect birds and other wildlife, as well as themselves). Lots of grooming, and happy cats, ensued. Soon we had handfuls of fluffy, warm feline fur. 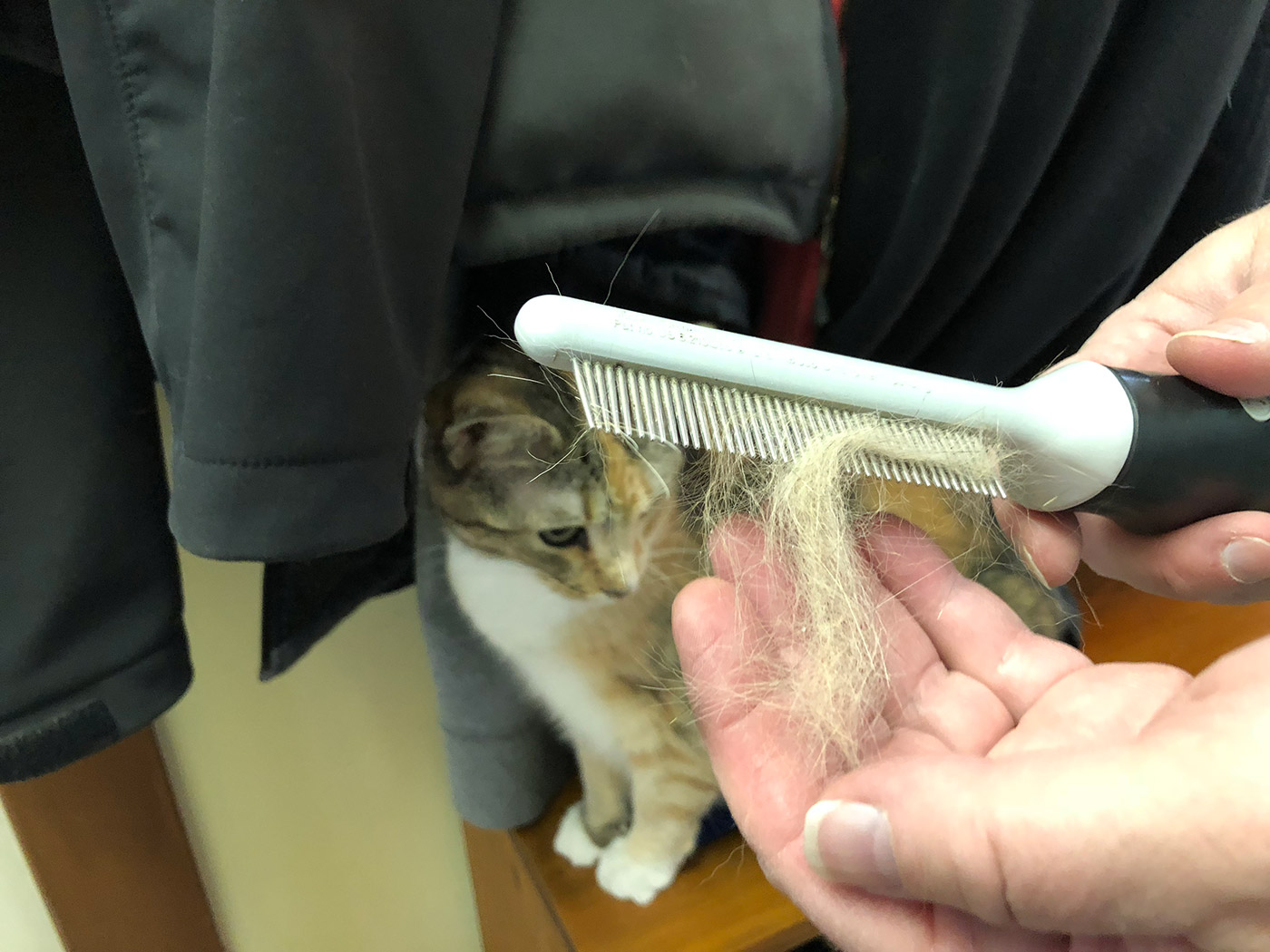 Fur from a freshly groomed Rascalia now lines the nest of a Tufted Titmouse that built a nest in our neighbor’s yard.

Within minutes of putting the first batch out into the lilac tree near the bird feeders, we spotted a Tufted Titmouse gathering up a clump, the fur puffing out from both sides of the bill as it flew away toward our neighbor’s backyard: Another bird species confirmed as breeding for our atlas block!

A few days later we put out some more and a Black-capped Chickadee did the same thing. How gratifying! 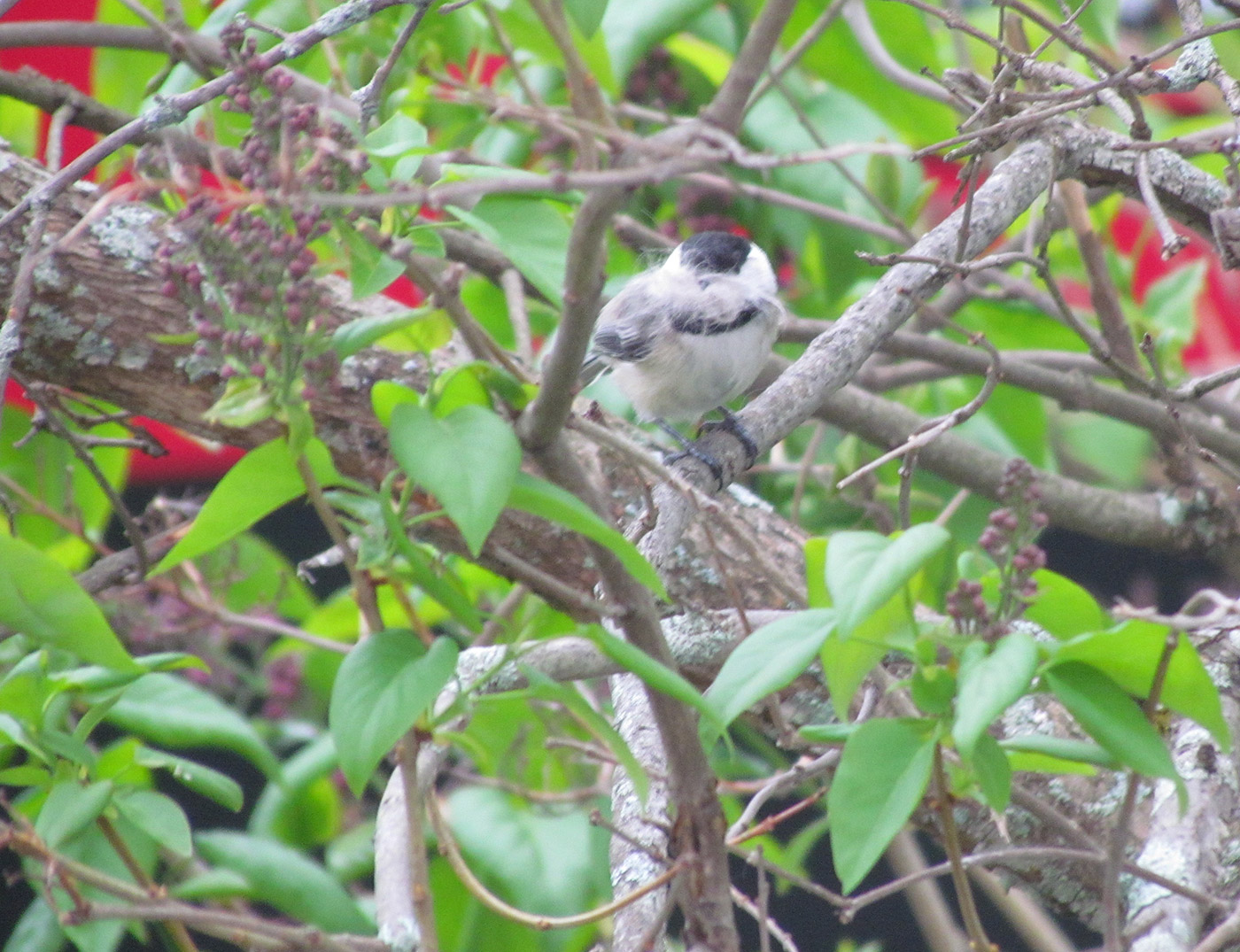 Our neighborhood Black-capped Chickadees are also making good use of the fur.

We continue to watch expectantly to see if any other birds come to incorporate our cats’ fur into their homes. 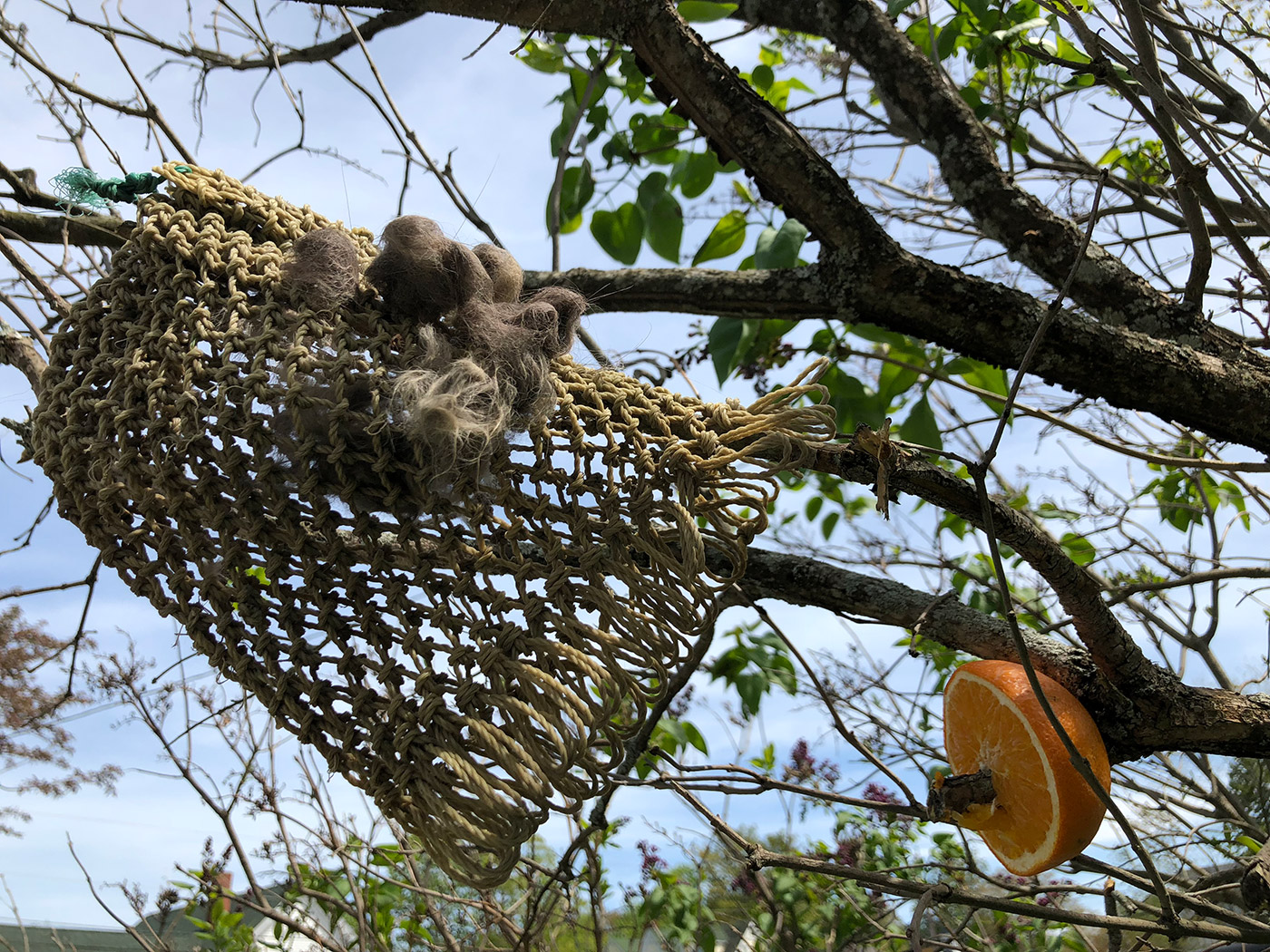 Birds make use of an astounding array of items for their nests. While watching the aforementioned tennis match, we saw the silhouette of a large bird that appeared to have a very long tail. For a split-second, we thought we were looking at a Magnificent Frigatebird, visiting perhaps from Aruba! Closer inspection revealed that it was an Osprey carrying a very long stick to rebuild a nest, perhaps one that had been damaged in the wind storms of the past autumn and winter.

More comical-looking were the Double-crested Cormorants we saw down at Biddeford Pool last weekend. They were picking up strands and clumps of seaweed and flying over to a small island where a few dozen were building their small nest mounds on the ground.

One of the most endearing nesting materials we know of has to be what female common eiders use for their ground nests. They pluck out their own soft, downy breast feathers (the same feathers used in down jackets and comforters) to make an ultra-warm and cozy cushion for their eggs. When they occasionally leave to feed, the eggs are guaranteed to stay warm even on a cool spring day on the coast of Maine.

What a great way to continue in our celebration of the Year of the Bird, by indulging in our fascination with the most intimate details of their lives and remembering how fortunate we are that one hundred years ago the most historic of legislation came into law—the Migratory Bird Treaty Act—to ensure their protection!