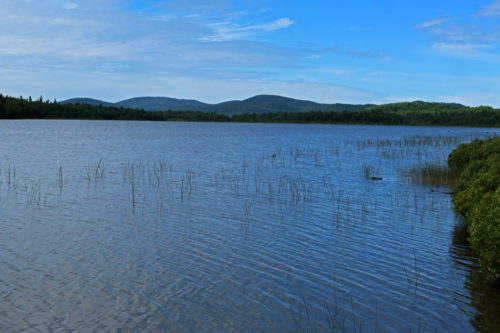 The final leg of my National Geographic Young Explorers grant was bittersweet. The day itself was glorious: warm, blue skies, and no clouds until we finally said goodbye to the Maine North Woods later in the afternoon.

After eating breakfast and packing up camp once again, Brian tugged the canoe up the stream to Munsungen Lake while I met him on the shore by car. Actually, I parked the car, walking the last quarter mile on a rocky, rutted road, lichen and moss species literally hanging from the trees. We set our things down on a small sand beach; other than a local hunting and fishing club, we were all alone.

Munsungen Lake has an interesting shape. From the end where we launched the canoe, we couldn’t even see the rest! To reach the broadest part of the lake, we skirted through a shallow cut-over, a dozen yards wide and mere inches deep. Looking up, we were flanked by steep ridges, and the more we paddled, the more surrounding peaks came into view. Even Mt. Katahdin winked at us from the distance. The only hint of humanity was the occasional drone of planes from above, and two white jugs in the waves marking rock piles where they reached the surface.

The water was so clear; I could easily see as far as 20 feet down, and I wanted to shuck off my boots and swim. My mind’s eye was filed with the azure of the sky and its reflection, the green of the young forest maturing on the surrounding land. I filled my lungs with everything: a snapshot of the Maine North Woods. 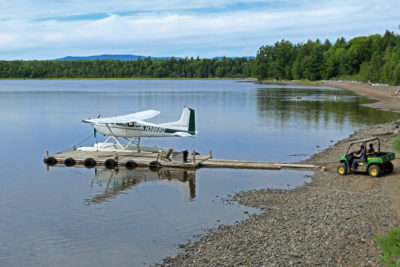 Our very last stop was Millinocket Lake, viewing the shore from Libby Camps – owned and operated for more than 125 year by the same family. They have one rentable cabin, among many others, that was actually built in the 1890s, and another just completed in 2015. The juxtaposition of Munsungen and Millinocket lakes, both of which feed the Aroostook River, demonstrated the ecological and human history of the region, and perhaps a future as well.

And with that, it was over. Four trips, five headwaters. In my very last blog post of these series, I will reflect back both on the North Woods as a whole, as well as the new national monument designation. Stay tuned!