Skiing at Katahdin Woods and Waters: A Glorious Trip

Some friends and I headed to Patten and turned west toward the North Gate of Baxter State Park. We stopped at Matagamon Wilderness Store and Cabins, who, with Bowlin Camps, have been grooming 18 miles of trails along the East Branch on the Elliotsville Plantation land that I hope will become the next national park. Our days in the Maine wilderness were so wonderful; I thought I would let them more or less speak for themselves through photographs we took during our excursion.

From my home near Augusta, it’s a 3.5-hour drive to the north entrance of the proposed national park lands on the Grand Lake Matagamon Road. We parked at the trail head, loaded up our gear, and off we went into the crisp, sunny day. 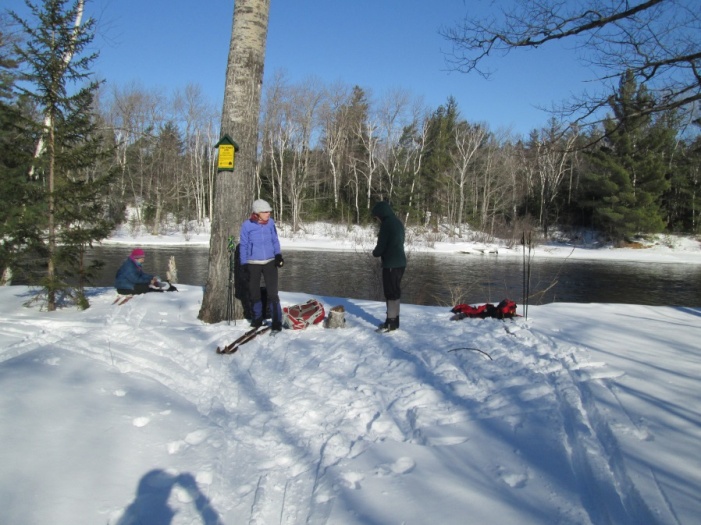 Ski conditions were perfect; thanks to all of the snow Maine has been getting recently. We had lovely granular powder off the groomed trails and a nice new half inch on the groomed trails. We skied for about three hours the first day, passing dense forests on one side and the icy waters of the East Branch of the Penobscot on the other. In places, the water was open; in others, not. We decided to have lunch and looked for a spot that provided sun, as it was chilly, and great views. The first objective was a bit more difficult, though the second was easy.  The place we chose was a campsite that is used by folks who paddle the river in warmer weather. There was an outhouse and picnic table. 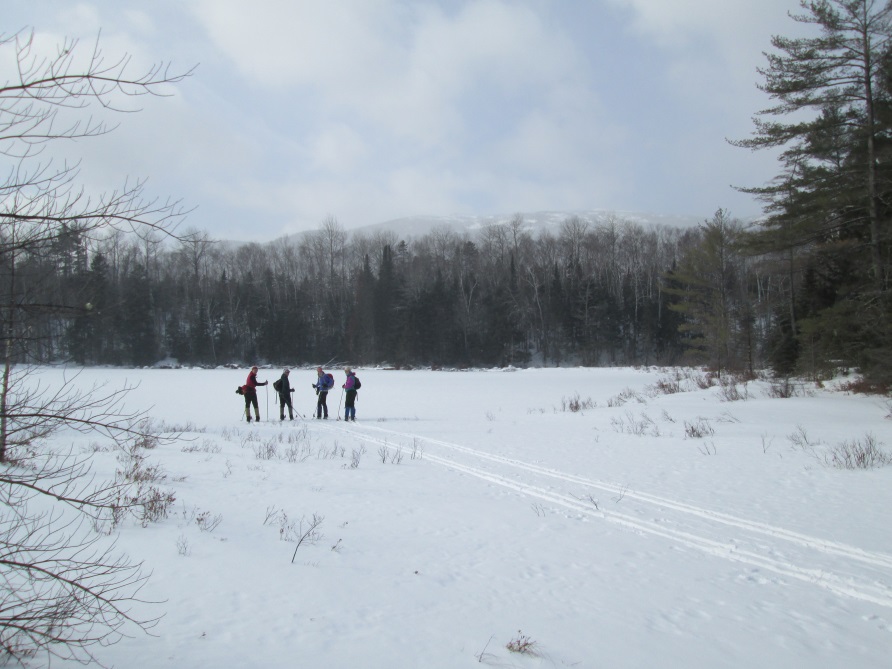 In the afternoon, we veered from the groomed trails and headed for ponds with a view and followed what we hoped would be waterways that would be easy skiing through the less-travelled parts of the land. Sometimes that was true, but we did end up bushwhacking through some alder tangles. 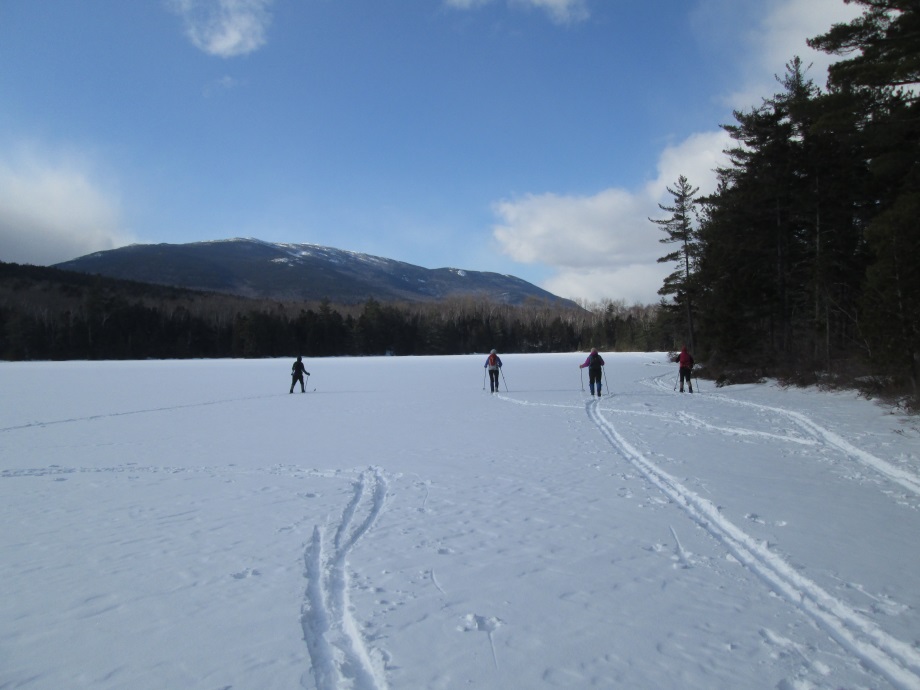 We were rewarded with spectacular views. Here, we are skiing across Messer Pond against the backdrop of the Travelers, a series of connected peaks in the northeastern part of Baxter State Park. 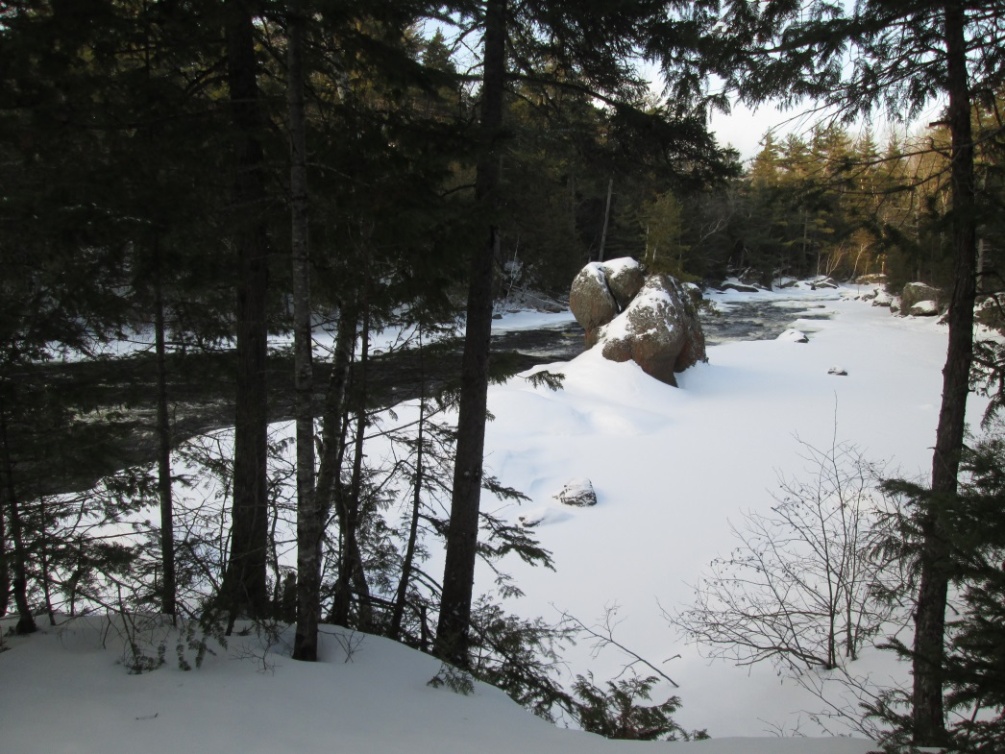 Our adventures also brought us to beautiful spots along the river. Here, we were looking at Haskell Rock just below Haskell Rock Pitch, one of the three “pitches” we passed along the East Branch. 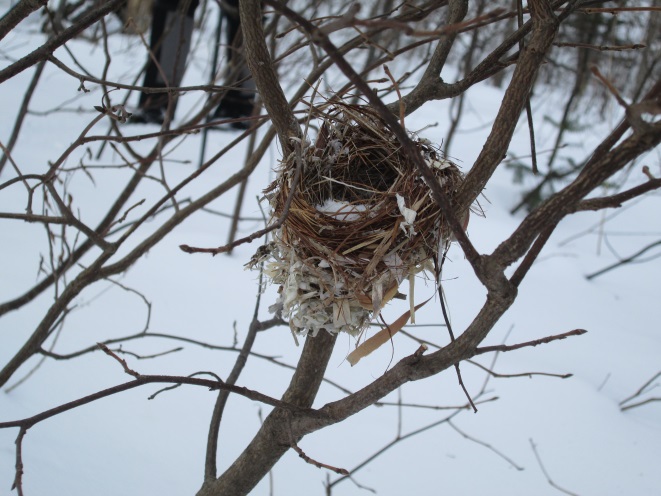 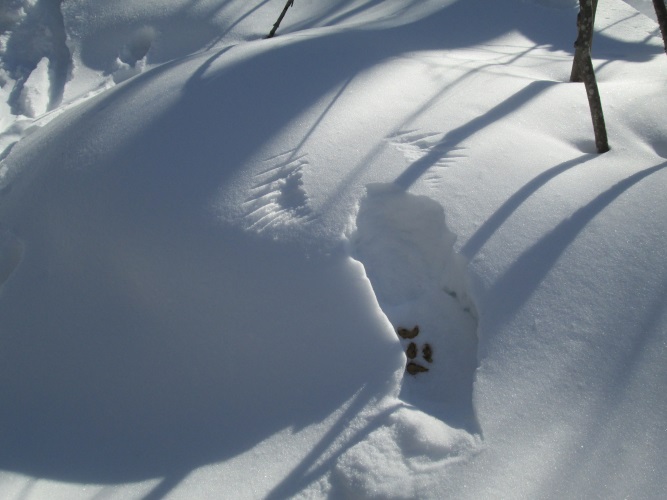 We saw LOADS of animal tracks and other signs that creatures of the North Woods had been around, including a nest and a grouse “cave.” The only sounds we heard other than our own were the calls of a few woodpeckers and jays—no planes, cars, or other vehicles. Adding to the peaceful atmosphere: the nights were starry and the moon was full. 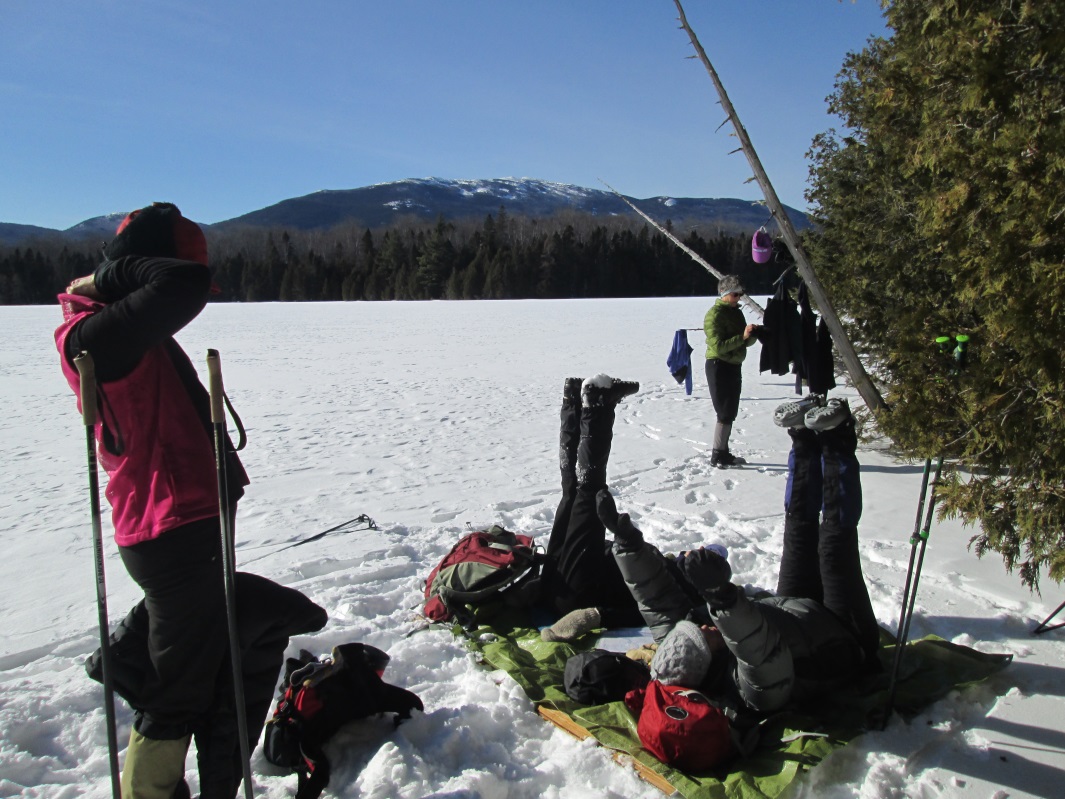 We kept our muscles warm and ready with some afternoon stretching and sun bathing under the Travelers – sure beats going to the gym! This is Little Messer Pond, which we actually hiked up to on our last full day out. We found a hiking trail leaving from the groomed ski trail at Pond Pitch. 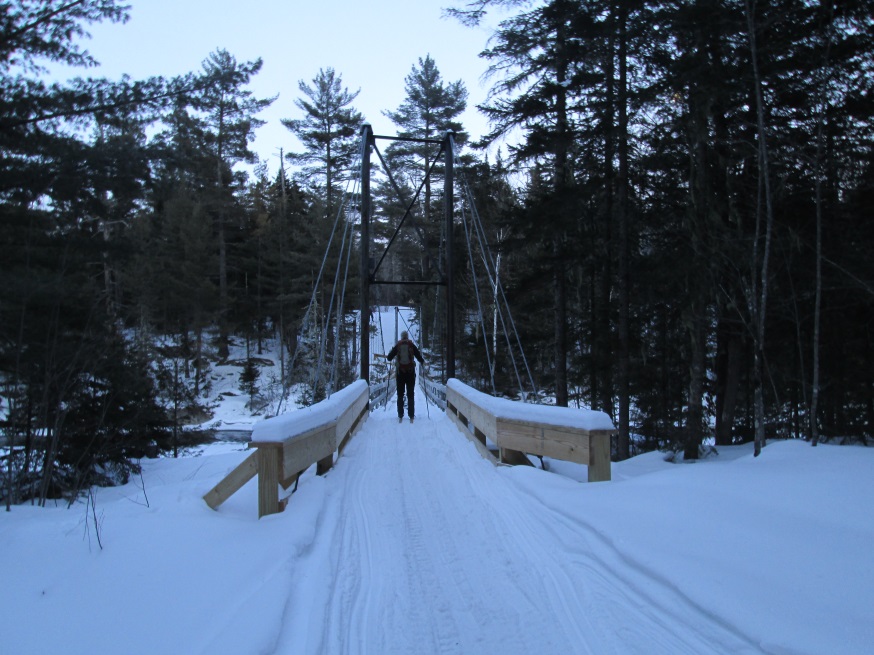 Then we headed to Bowlin Camps for our last night, to eat, revel in the days spent outside, and sleep.

We came back to civilization relaxed and rejuvenated… what a wonderful life in a wonderful place. I look forward to my next visit to this special part of Maine. And I encourage you to make the trip, it is worth it tenfold. The people at Matagamon Store and Camps and Bowlin Camps were a pleasure to do business with, and I can’t thank them enough for their efforts on the wonderful trails we skied. If you think you might go, NRCM has a nice map of the cross country ski trails.  Enjoy!