Senator King and I: Touring Mt. Abram, the Mountain that’s Gone Solar and Beyond

Looking for a good excuse to head to the slopes? Mt. Abram ski area offers plenty, and they’re good for Maine’s environment. 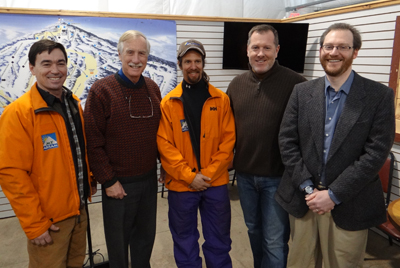 On February 16, I had the great pleasure of joining Senator Angus King for a tour of the Mt. Abram in Greenwood, Maine. This locally owned, family-friendly ski area now hosts the second-largest solar power array at a North American ski area. Last November, the business flipped the switch on a 245-kilowatt, 830-panel solar array that will provide 70 percent of their substantial electricity needs. That’s enough solar to power nearly 50 homes! The solar project was made possible with a competitive grant from the U.S. Rural Development Authority.

This is just one example of how solar energy is enjoying explosive growth across the country, as solar costs plummet. Mt. Abram’s investment is shows a Maine business taking advantage of solar to lower their energy costs and protect itself from highly volatile energy markets.

Unfortunately, Maine is lagging in efforts to encourage solar power, despite the fact that our state faces considerable threats posed by climate change, which Senator King pointed out during Monday’s tour. “From our Downeast coastal waters to right here in Greenwood, people in Maine are already experiencing the worrisome impacts of climate change,” the Senator said. “It’s a serious and substantial issue that threatens people’s livelihoods, local industries, and the very health of our state’s economy.” 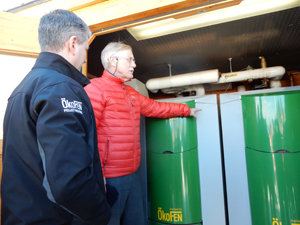 Senator King, who is part of the Senate Climate Action Task Force, announced that he and fellow Maine Senator Susan Collins are introducing legislation to provide federal tax credits for biomass heating systems, similar to federal tax credits now available for other small-scale renewable energy sources such as solar and geothermal.

“We’re very excited about our new solar facility as a way to improve our sustainability and control energy costs,” said Mt. Abram owner Matt Hancock. “We’ve done a lot with energy efficiency to reduce waste and lower our use of oil and electricity. The logical next step is to take some control over where we get our power from. Predictable energy costs mean a lot to a business like ours.” 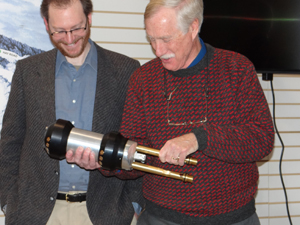 Senator King and I get a chance to see the latest high efficiency snow-making gun that doesn’t need any compressed air to work, which drastically reduces Mt. Abram’s electricity use.

I’m happy to add that solar is not the only way Mt. Abram is shifting to climate-friendly clean energy. Mt. Abram has reduced its annual emissions of climate-disrupting carbon by more than 760,000 pounds of CO2, with all of its investments combines. These include:

Maine is leading in some other areas, however, including through its participation in the Regional Greenhouse Gas Initiative (RGGI), which NRCM helped pass. RGGI limits carbon pollution from power plants and raises money to fund energy efficiency investments that provide a significant state and regional economic benefits. For example, RGGI helped to fund the incentive Mt. Abram received for snowmaking equipment. RGGI has helped Mainers achieve $257 million in lifetime energy savings since December 2013. More good news: it also puts Maine in compliance with the EPA’s proposed Clean Power Plan, which would limit power plant carbon emissions nationwide.Meanwhile, strap on your skis and head to climate-friendly Mt. Abram to enjoy the slopes

NRCM is leading the legislative charge to spur solar markets, reduce barriers, and increase access to solar for more homes and businesses. This session, we’re supporting several bills introduced by Democrats and Republicans to improve Maine’s solar energy policies. I hope you will stay informed of our work in support of these bills and take action when it’s needed.

More and more, homegrown power generated on a roof or field in Maine has become an economical energy option. Yet Maine is the only state in New England with no specific policies to promote solar power. It’s a tragedy that Maine has the second-lowest amount of installed solar capacity per capita of the 11 northeastern states and has the second-lowest number of solar jobs per capita in New England.