A River of People 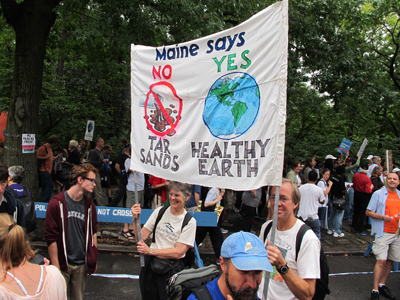 Here I am marching through New York City yesterday with more than 300,000 others who want climate action now!

They were old and young. Men and women. Black, white, brown, and everything in between. Workers with hardhats and professors. It seemed like the full spectrum of American diversity was on the streets in New York on Sunday, September 21st. And they were all calling for action on climate change.

The messages were as diverse as the people:  more solar power, ride bikes, stop fracking, eat vegan, protect the earth for my children and grandchildren, more wind mills, stop using fossil fuels, pass a carbon tax, save the polar bears and penguins, convert to nuclear fusion power, stop tar sands, protect the pollinators, environmental justice, and on and on.

The media says there were 310,000 people there. What I know is that we were half way back in the “assembly area” (between 59th and 86th Streets), and we were wall-to-wall people and couldn’t start walking until an hour and a half after the march started. For at least four hours, 6th Avenue was packed with marchers.

Just before 1:00, word went through the crowd:  Two minutes of silence at 1:00 for all the victims of climate-related disasters that have already occurred. More than 300,000 people fell silent; everyone I could see put their hands up in the air; I got goose bumps. Then after two minutes, a roar started in the crowd and the loudest shout, accompanied by drums, bells, and brass bands, was sent out to the leaders of the world who will be meeting to talk about climate change this week in New York.

The message was clear:  we want action… NOW.

The Natural Resources Council of Maine has been leading efforts in Maine addressing climate change, from increased energy efficiency to cleaner cars to more solar power for homes and businesses. We have also been a strong voice for policy change at the national level. The single biggest climate action our federal government can take is to put the first-ever limits on climate pollution from power plants. That’s why the EPA has proposed its Clean Power Plan. Please send your comments to the EPA in support—and get ready for a big fight with corporate polluters and their allies in Washington! Learn more about our climate change work.