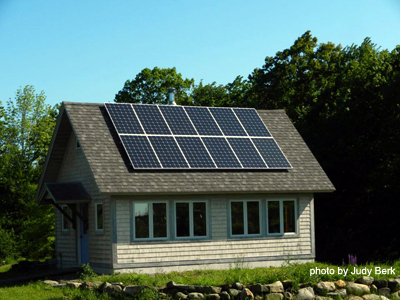 So the Public Utilities Commission (PUC) did a study that concluded the “value of solar” is 33.7 cents/kwh. (The study was done in response to legislation last year that NRCM developed and led the passage of.) What in the world does that mean? Is that what solar is worth? What it costs? How does that compare to anything else that the average person understands? Who benefits from that 33.7 cents?

Let’s take a real world example: a rooftop home solar installation that is 5 kilowatts (KW), or enough to provide most of an average homeowner’s electricity use.

Over 25 years, that system will produce about 165,000 kilowatt-hours (the system probably lasts for 30 years, but the PUC did the math for 25 years). All of it is produced during the day time (shocking!), which corresponds well with the highest demand for power on the electric grid. And it produces power for the longest amount of time during the summer (another shocker: days are long during the summer!) which is when we really have heavy demand.  Many of the costs we pay as electricity consumers are determined not just how many kilowatt-hours we use, but by the pattern of high demand on the transmission grid and on power plants.

When demand is very high, that solar power from your roof is also special because it’s produced where you are going to use it. So instead of adding to demand on the grid, you are subtracting from it.

A big part of the value of solar study was quantifying the benefits of the pattern of kilowatt-hours produced by the unique properties of solar, especially “distributed” solar.

So, over 25 years, that home solar installation will yield the following benefits:

This is great, but this value doesn’t count any of the benefit that would be shared by anyone else. What about the benefits to other ratepayers because of what that solar does for the grid and the reduced need to run expensive power plants? That’s worth:

And it doesn’t stop there. That solar reduces a considerable amount of air and climate pollution over 25 years. Quantifying this is tricky, but reduced respiratory illness and less climate change is worth something, so here’s a conservative estimate from economists and other experts, according to the PUC:

So our home solar installation benefits everyone else to the tune of:

Net-metering goes a little way to compensating you for the value of your solar. Over 25 years, our solar homeowner might be given some $26,000 in credits on their bill. (This and all the other numbers here are in “present value,” meaning, future savings are “discounted” into today’s dollars.) So CMP is paying our solar homeowner $26,000 for something that benefits other ratepayers and the public by $42,000. Seems like we’re missing something…

We’re missing some policies to treat solar fairly and that do more to grow the solar market and increase access to solar for more homes and businesses. We’re missing some solar policies that will actually achieve more of these benefits for the public.

By the way, how much do you have to pay upfront to install a 5-KW solar system? About $12,250 after tax credits. It’s a good deal, and it would be a much better deal if Maine was doing more to reduce barriers that currently are keeping the lid on solar in Maine compared to all the other states around us. Help NRCM put the pressure on by urging your legislators to support solar!