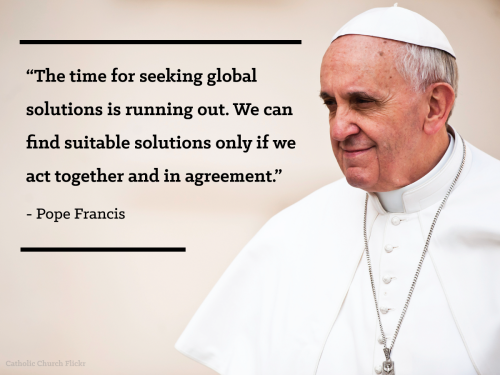 “In this encyclical,” Pope Francis writes, “I intend especially to engage in a dialogue with everyone about our common home.”

As a Catholic, it’s exciting for me to see Pope Francis putting climate change at the top of the Church’s agenda. Climate change has disastrous implications for our common home—God’s creation—and for the world’s poor. I didn’t get into the world of environmental advocacy just because I want to protect the great outdoors, but because for me the despoiling of our environment has always been a matter of social justice.

Today’s encyclical,  Laudato Si, or Praised Be, brings a powerful voice to the debate on climate action. Encyclicals are papal letters originally circulated to all bishops of the Roman Catholic church, and now they are meant to attract a truly global audience—“all people of goodwill.” They are among the most definitive pronouncements on Church doctrine a pope can make.

Pope Leo XIII caused an earthquake in 1891 with the encyclical Rerum Novarum, which addressed the relationship of labor to capital. In this landmark statement, Leo defended the rights of workers in a time of unprecedented industrial growth and social change. Rerum Novarum also condemned unrestricted capitalism—and in that way it is connected fundamentally to the many statements of Pope Francis on our culture of consumerism and its damage to the environment, the poor, and our own spiritual lives.

Is this a big deal? This is the first time a pope has issued a teaching solely on the environment—“a dialogue with everyone about our common home.” Just look at who is attacking the Church’s new role—deniers like Catholic and presidential candidate Jeb Bush:  www.theguardian.com/us-news/2015/jun/17/jeb-bush-joins-republican-backlash-pope-climate-change

Catholic writer and historian Gary Wills wrote of Pope Francis in April:
“The billionaires are spending a great deal of their money in a direct assault on him. They are calling in their chits, their kept scientists, their rigged conferences, their sycophantic beneficiaries, their bought publicists to discredit words of the pope that have not even been issued…They do not know exactly what the pope is going to say in his forthcoming encyclical on preserving God’s creation, but they know what he will not say. He will not deny that the poor suffer from actions that despoil the earth. Everything he has said and done so far shows that Francis always stands for the poor. Those who profit from what harms the earth have to keep the poor out of sight.” www.nybooks.com/online/2015/04/30/whos-afraid-pope-francis/

The skeptics and deniers are attacking him because they know how powerful it is to have the Church weigh in on climate action.

And weighing in it is. The Vatican has made no secret that the timing of the encyclical is designed to pressure UN negotiators this summer and fall.  Pope Francis sees a clear moral imperative here, and he means for the Church to act effectively.

This is no academic exercise. Pope Francis is clearly entering the political fray in his comments on climate deniers:  “The attitudes that stand in the way of a solution, even among believers, range from negation of the problem, to indifference, to convenient resignation or blind faith in technical solutions.”

This encyclical is what being a Catholic is all about:  care for creation and a preference for the poor.

And all the evidence indicates that climate change will devastate the world’s poor. Scientists predict that some of the worst direct impacts will hit the world’s least-developed countries and populations already stressed by drought, hunger, disease, and instability. These resource shortages will spawn more conflicts, creating refugees. See what the US military is planning for:
www.nytimes.com/2014/10/14/us/pentagon-says-global-warming-presents-immediate-security-threat.html?_r=0

At its very core, this encyclical is telling us to care for the least among us, the most vulnerable, the widow, the child, the stranger. These are the messages of hope and compassion that I have heard on countless Sundays since before I can remember. To have the Church raise its powerful voice for climate action makes all the sense in the world to me.

And that is why NRCM’s climate advocacy always energizes me. Whether we’re trying to get more solar power online, working with Maine’s Congressional delegation, or digging deep into energy-efficiency policy, it is important work to the future of our world, our common home.

Often, within the Church, an encyclical is significant enough to end debate on a theological matter. Is it too much to hope that today’s letter will help end the debate on whether climate change is real and what we need to do about it?