I’d like to cap off 2015 with a short note about a big topic: our place in the international community. We spend much of our time at NRCM focused like a laser on our policymakers in Augusta and on the many citizen groups we work with at the community level. There is plenty to do right here in Maine as we all try valiantly to protect our woods, waters, and wildlife; address climate change; and make our local practices more sustainable.

But we are also part of much larger world, and that is becoming more evident every day. The fact that 188 nations recently came to a consensus in Paris on significant carbon emission reduction targets indicates that this small planet we inhabit is becoming more of a neighborhood. We are seeing that we must rely on each other – our neighbors — for our mutual health, safety, and quality of life.

For those of us who have watched previous international climate summits end with a whimper, the Paris Climate Accord is an exciting leap forward. It provides a way for us to keep pushing ahead. Now comes the hard work of making sure that Congress stands behind the leadership of President Obama, the essential U.S. emission reduction goals set by the Clean Power Plan, and the funding we committed for nations who are and will be harmed by our nation’s history of energy excess. 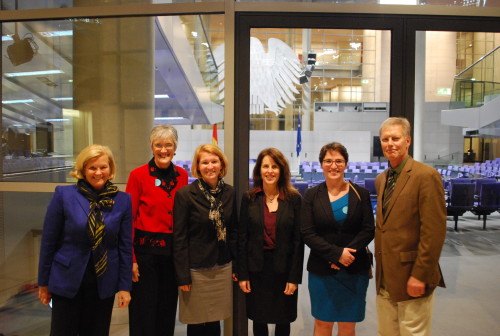 I got a personal glimpse of our connection to the broader world during a November trip to Berlin and Frankfurt as part of a German-American Dialogue sponsored by the Aspen Institute. I accompanied U.S. Representative Chellie Pingree and four other Maine leaders, as well as similar delegations from a few other states in the U.S. and in Germany.

This program stems from Germany’s place as a strategic power broker in the European Union, which is driving their desire to forge a stronger alliance with the U.S. Significantly, we arrived soon after militants brought down a Russian aircraft over Sinai. Thus, our first meetings in Berlin involved facilitated discussions with the policymakers, focused on international military aggression and terrorism. I was riveted watching these representatives debate how to deal with ISIS, Syrian refugees, and Russia’s posture with Ukraine.

It struck me—hard— that these men and women are no different than the rest of us, trying to weigh individual human interests and international politics in the face of incredibly complex global issues. It was clear that they felt a grave sense of responsibility but also faced their inherent lack of control over the violence coming from so many directions. We were all heartbroken—again—when the news of the Paris attacks came the Friday before we returned home.

I was chosen to participate because of NRCM’s leadership on clean energy and climate change policy. Germany has set ambitious goals to address climate change, including having 80% of its electricity generated through renewable sources by 2050. While the nation has invested heavily in wind and solar power, it still mines for coal and relies on natural gas from France and Russia. German leaders face an enormous financial and political challenge to reach their goal, but their active participation in the Paris climate talks showed their ongoing resolve. At NRCM, we keep a close eye on their progress as we continue to work on Maine’s climate change policy at the state level.

We met with members of their Green Party, visited an immigrant health center, a nonprofit arts complex, a local wind farm, and a business start-up center. Our NRCM 2016 Nature of Maine calendars were a huge hit as gifts to the Frankfurters, who were blown away by the natural beauty of Maine.

Germany is about the size of Montana with 80 million people and growing, since they have become the melting pot of Europe, taking in 800,000 Syrian refugees in 2015 alone. With their strong focus on clustered development and public rather than private land ownership, it is fascinating to ponder where their human and environmental journey will lead them. I have a German heritage on my father’s side, (that’s pretty obvious from my last name!) and I felt viscerally connected to our hosts— their goals and their struggles. I wish them well.

It’s good to get away and see what our neighbors far and wide are doing. It’s also good to come home to the state I love. I wish all of us well, across the globe, as we face the ongoing and complex challenges of 2016. Blessings to you and yours.