A Huge Win for the Whole Team 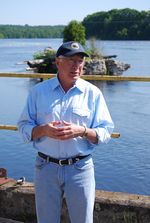 The day of the Great Works Dam removal celebration dawned sparkling clear. For me it started early at the Veazie Salmon Club, and had a few moments by the Penobscot River before everyone arrived. The power of the river was palpable, especially after all the rain we’ve had. It coursed over the Veazie Dam, and I imagined what it would look like when that dam comes out next year. I talked with Bill Townsend, one of NRCM’s founding fathers and state environmental historians, who recounted how he was involved in this river restoration project when it was first being considered, 26 years ago. His was a testament to just how long a great plan can take to fulfill. 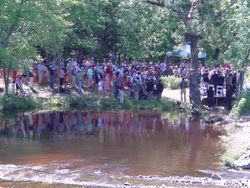 A large crowd gathered on the banks of the Penobscot to celebrate this historic event.

About 60 people who had been deeply involved with the Penobscot River Restoration Project arrived, and we showed U.S. Secretary of the Interior Ken Salazar the Veazie Dam and took a ride out on the barge that gathers salmon and other fish from the fish elevator and places them in trucks to travel upstream beyond other dams to spawn. Such a clumsy way for humans to do what nature should have been doing all along!

When we all arrived at the Great Works dam site, several hundred people had gathered there including most of NRCM’s board and staff. Penobscot Nation leaders blessed us all with sage and song, followed by wonderful statements from Maine’s Congressional delegation, capped off by a moving speech from Secretary Salazar about our accomplishment in Maine and what a model it should be for the nation.

Then the great clanking of the cranes began, pounding through this 1,000-foot-long hunk of cement and timber, that, combined with other dams in the area decimated fish populations and their ecosystem all up and down the river. Dust flew up, chunks of cement fell down.

By November of this year, it will be gone. Amazing! But the amount of hydro power generated by the Penobscot will be greater than or equal to current levels, due to upgrades at some other sites. It isn’t every day that NRCM gets to celebrate victories in two of our project areas—river restoration and clean energy—in one fell swoop!

Next, everyone joined together for lunch on Indian Island, hosted by our partners, the Penobscot Nation. There was great cheer as colleagues laughed and caught up on news. A circle of drummers kept the place throbbing while youngsters spontaneously danced around them. People milled around information tables and took away souvenirs. 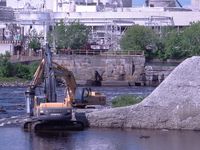 Representatives of each of the seven members of the Penobscot River Restoration Trust, including me for NRCM, said a few words about the wonderful cooperative partnership this has been. Spirits were so high they floated right out into the afternoon sunlight as folks slowly drifted away to take walks on the medicine trail or a river trip in a birch bark canoe. I couldn’t have felt more proud of all of us.

A bunch of NRCM staff members went out for ice cream on our way home, lingering and savoring the day. As we relished our cones and each other’s company, someone said, “This feels like we just won a ball game!” I’d say, in Maine, we hit a grand slam on this day.