On an Indian Summer morning in October my husband, brother, and I took a backroad truck ride from Dexter up to Katahdin Woods and Waters National Monument. Orange and yellow leaves grabbed the sunlight and tossed it back at us as we rolled along the quiet roads to Millinocket.

We were grateful for the brilliant sunshine when it rose above the treetops. The Old Staceyville Road was criss-crossed with logging roads unfamiliar to us, and our dog-eared DeLorme was woefully out of date. More than once we knew we’d made a wrong turn by the angle of the shadows crossing the road.  “We’re going west. Turn around.”

We didn’t regret a single wrong turn. One led us to a remote campsite on the shores of Millinocket Lake. Though we couldn’t linger, we still daydream about the setting and the solitude of that retreat. Lucky owners.

In our meanderings, we encountered a friendly guy grading the road. He rolled down his window and took time for a chat. “Old Staceyville Road is up by all them snowmobile signs on toppa the hill. Take a left. I’m grading this road today ‘cause they’re gonna start cutting up here next week. Lotta trucks coming.” We thanked him, waved, and headed on.

That road got pretty rutty and then it got wet. A beaver pond engulfed it. And there was the curious beaver just to our left, swimming back and forth and sizing us up. My brother hopped out of the truck and found that the submerged road bed was still good, and the water wasn’t too deep. He put the truck in gear and off we went, leaving a wake and the beaver behind.

We finally pulled up to the National Monument kiosk at mid-day. Two white-haired partridge hunters in a Subaru pulled up behind us. (They were hunting at a nearby sporting camp. Never saw a partridge until they put away their weapons and drove to the monument—where they spotted loads of them.) We signed in, then proceeded around the Loop Road for a view of Katahdin. 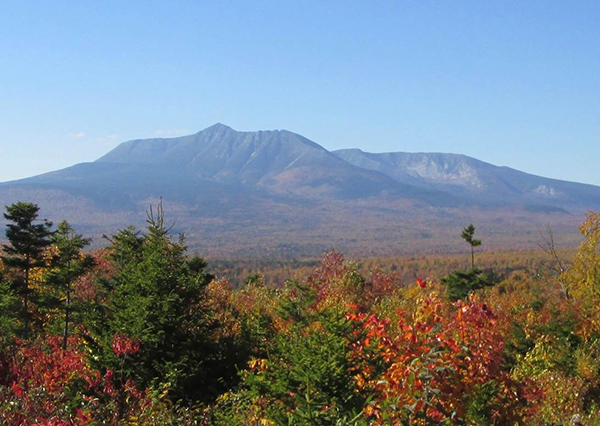 Our view of Katahdin. Photo by Annie Winchester

The views did not disappoint. At one of the pull-outs, we had a 180-degree westerly view of the mountain, Millinocket Lake, and a whole range of southwestern peaks (Barren, Number Four, Spencer, to name just a few). Having climbed Katahdin many times, we were spellbound by the afternoon sun’s highlights on the mountain. We traced every ridge, peak, and plateau with our eyes. And we remembered the feeling of hard-won elation that came with each ascent. Sometimes we climbed in rain, sometimes hot sun, sometimes clouds of bugs, sometimes crisp fall air, sometimes biting wind, but always in a state of gratitude for the privilege of being in such unspoiled surroundings.

Rolling along the remainder of the Loop Road, it was easy to understand why the historic [Thoreau era] approach to Katahdin passed through the territory that now makes up the monument land. The awe-inspiring view from the east is at once intimidating and inviting. It stirs you and it stays with you. And it calls you back.

[If you venture up by way of the Old Staceyville Road, bring your DeLorme, a compass, picnic stuff, a sense of adventure, and watch out for logging trucks.]

—by NRCM board member Annie Winchester