News Center Maine Meteorologist Keith Carson: “Weather Was Always My Passion. But Climate Change Has Grown On Me.”

Weather is my passion. It’s been that way since the Blizzard of 1993 hit my home in Massachusetts when I was 10 years old (quick math, how old am I?). 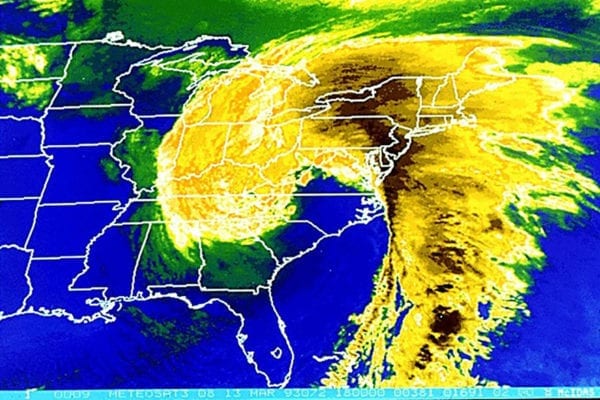 I knew from that early age that I wanted to do what I loved when I “grew up.” So I slugged through Calculus, Physics, and Thermodynamics to come out the other side with a degree in Atmospheric Science. I worked in private weather, then local TV, then national TV, then local TV again.

Weather was always my passion. But Climate Change has grown on me.

That seems like a weird thing to say, but it’s the truth. I had a broad understanding of the topic even dating back to my early college years of 2001-2005. But it seemed so distant, and something that we would be well on the way to fixing by the time I reached a really impactful age.

But here we are, 18 years later, and people are STILL arguing about Climate Change.

Note I said people, not atmospheric scientists. The scientists ended the argument on Anthropogenic Climate Change quite a while ago.

Over the past 5 years, my interest in and knowledge of climate change science has greatly increased. I care deeply about the earth, but if I’m being honest, my full speed charge into the Climate Change spotlight on air, on social media, and on the speaking circuit has more to do with defending science than defending the earth.

Science is a way of thinking; it’s a process. So my eyes catch on fire watching 30% of the country just say “Nope, Climate Science is junk. It’s fake.” Think about where that could take us long term…

The great irony of this is that social media is where I most often am bombarded with the “Oh yeah! Al Gore made it all up and the ice caps aren’t even melting!” kind of stuff, but the people posting are using a smartphone (from science) on a cellular network (from science). 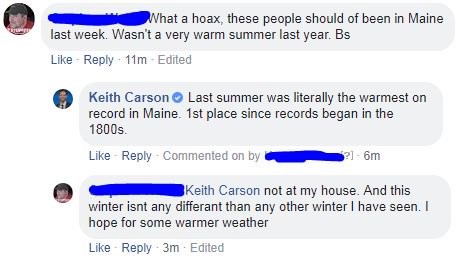 So I take on the internet trolls the best I can, I respond to viewer emails about Climate Change, and I even call Climate Change deniers on the phone and offer to answer any questions they might have. I’m trying.

I’m trying because, to many Mainers, television meteorologists are the only scientist interaction they’ll have that day. So it’s important that my voice speak for the thousands of climate scientists that don’t put on makeup, get in front of a camera, and reach a few hundred thousand people.

In closing, let me share with you things I’ve learned interacting with hundreds of deniers over the years:

That’s what I’ve learned. I’m here standing up for science and I applaud all those who stand with me.