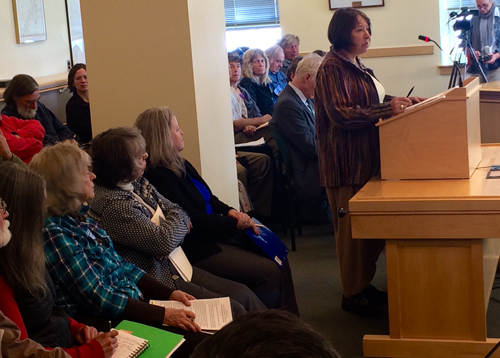 Rep. Janice Cooper speaks at the LD 146 public hearing. Seated at left, Alice Bolstridge, Gail Maynard, and Shelly Mountain (all residents of Aroostook County), wait to testify in opposition to the bill.

NRCM just completed an analysis showing that Maine people, particularly from Aroostook County, overwhelming spoke out in opposition to the mining rules that were considered during a legislative hearing last week. Those who testified or submitted comments in opposition to the proposed rules at last week’s public hearing outnumbered those in support by 129 to 8.

Individuals who spoke or submitted comments in opposition to the rules came from 63 towns across Maine, with more comments against the rules (8) from Presque Isle than from any other community—outnumbering even Portland. 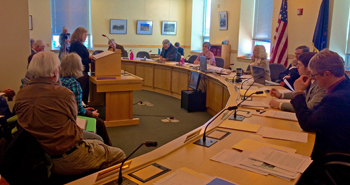 Our analysis includes a summary of who testified or submitted comments last week, and where they were from, and also quotes from statements of Aroostook County residents.

A top question facing lawmakers is whether they will recognize that Maine people oppose these weak rules that won’t protect our water quality and taxpayers, or whether they will side with Canada-based Irving Corporation and its in-state consulting firms who are trying to push through bad rules.

Here’s some of what we found:

We hope you’ll take a moment to read all of the comments from Aroostook County residents who took the time to make their concerns known. Meanwhile, here are a few:

Darrell and Lorette Adams (Mars Hill)
“My wife Lorette and I have lived in Mars Hill in Aroostook Country Maine for 15 years.  I was born and raised in Presque Isle, so we have a deep connection to Northern Maine. The proposed mining rules weaken the existing rules which protect our largest employer in the state which is tourism and retirement.  In Maine we have high sulfur mineral deposits which, when exposed to air and water create sulfuric acid leading to acid run-off.  Our watersheds and groundwater should not be risked if we are to continue to be a destination for tourists and retirees”.

Alice Bolstridge (Presque Isle)
“I am Alice Bolstridge from Presque Isle.  I am opposed to these rules because they are too weak to protect the environment. We need rules that are strong enough to protect the most environmentally risky sites such as Bald Mountain which contains unusually high level of toxic chemicals that are now contained in the rock. With these rules, open pit mining at this site would pollute a chain of rivers, streams, and lakes which are some of the most pristine areas for brook trout in the United States.  This proposed mining site is likely even more dangerous than the one left by the Callahan Mine in Brooksville. I am an old woman thinking about the legacy I and my generation will leave for the future.  My children and grandchildren enjoy fishing in the waters of the river chain downstream from that most risky proposed mining site. Bald Mountain is just west of Portage Lake, my home town.  These rules would allow a mining company to ruin a sustainable, life-enhancing legacy for the sake of a temporary boost in J.D. Irving’s corporate profits. Please, don’t let that happen.”

John Graves (Presque Isle)
“I urge you to not weaken mining regulations for Maine. The risk of accidents which would pollute pristine natural trout habitat is too great. The benefit of short term industrial expansion is paled by the eternity of maintenance and cleanup that would exist after any mining is finished or after a disastrous accident.”

Gail Maynard (Woodland)
“I am an organic beef and grain producer from Aroostook County.  My family operates Orchard Hill Farm in Woodland.  As a farmer, I understand the importance of healthy soil, clean air, and water quality.  I want strong mining rules to protect my family and my business.  Weak mining rules allowing wide spread groundwater contamination threaten the pristine aquifer underlying Bald Mountain and my home.  There is an ongoing marketing campaign to promote Aroostook County as the bread basket of the northeast.  The ‘Aroostook Brand’ has a mystical quality, invoking images of abundant, healthy cropland, clean air, free flowing streams and unspoiled vistas.  I ask you to consider images that might result from weak mining rules: acid mine tailing ponds, stunted fields and forests, fish kills, rivers of unnatural color.  This grim picture is anything but ‘Business Friendly.'”

Wayne and Pamela Sweetser (Presque Isle)
“We live and farm in Aroostook County and struggle every day to stay financially afloat.  We also know well the folly of destroying for short term gain the very resources that sustain us: air, land, water. We sincerely hope that you will accept the truth from empirically proven evidence that open pit mining such as J.D. Irving and its proponents advocate WILL release toxins that WILL poison ground and surface water.  Without strong mining rules, Maine will lose a lot to gain a little.  The losses will be for all Mainers; the losses will last forever and their costs will be generational.  The gains will be temporary and serve a few.”

Thank you for all you do to protect Maine’s environment.