The Maine coastline is dappled with scenic islands, providing ample opportunities for exploration and appreciation. This is particularly true of the region in and around Penobscot Bay, featuring perennial all-stars like Mt. Desert Island and Vinalhaven alongside hundreds of lesser known, but equally alluring, sea-framed rocks. Recently, I had the pleasure of venturing to one of them with my partner Hannah to spend two nights 12 miles offshore amongst 54 full-time residents (although rumor has it far fewer stick it out for the full winter). Despite its small population and humble stature, Monhegan Island has captured the hearts of many with its rustic seaside charm and natural beauty.

Visitors can access the island on any of three ferries from the mainland, and each summer day sees the population ebb and flow with the tide. Although the length of the island end to end is less than two miles, it is truly a hiker’s paradise, with nearly 12 miles of trails weaving from coast to coast. The village radiates out from the main dock in a contained sprawl of dirt roads and clapboard homes. One of these leads up to the Monhegan Lighthouse, constructed in 1824. The lighthouse failed to pierce a thick fog in the fall of 1948 when the D.T. Sheridan tugboat ran aground on the southern tip, leaving behind an impressive steel hull that can still be seen today if you manage to walk past the Monhegan Brewing Company to Lobster Cove. Thankfully, the majority of the island has been protected from development, ensuring that acres of forest and coastline are available to all sorts of floral and faunal inhabitants. 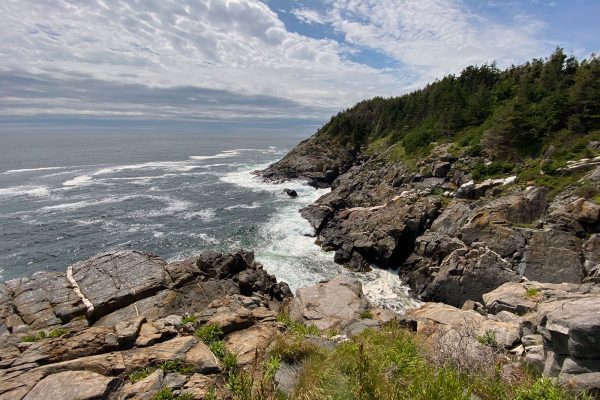 Out of sheer excitement, I booked our ferry ride over a month in advance. Our enthusiasm grew with the daily temperature as June became the hottest on US record, segueing into a July that almost certainly will challenge the high temps of Julys past when all is said and done. But we could handle a little heat on an island! After all, the ocean’s insulating effect would keep us right in the perfect zone, cool sea breeze permitting.

It was with this supreme confidence in mind that I learned of Tropical Storm Elsa, then Hurricane Elsa, speeding up the eastern coast with an ETA at Port Clyde that perfectly aligned with our own. Fortunately (or unfortunately) for us, Maine ferry captains have seen far worse, and we arrived at the dock in sheets of rain alongside a dozen other soaking travelers. One of us, and I won’t name names, doesn’t have the strongest sea stomach, so we weathered the torrential downpour and substantial swells out on the deck striving to make out a horizon through the fog. An hour later, wet to the bone, we found ourselves sprinting to our lodging up a dirt road that served as more of a stream bed at the time. Even the fastest of sprinters, and we count ourselves among them, could not have covered that 400 feet in time to preserve dry luggage, and we were fated to spend the next two days in various shades of damp.

No amount of wet clothing could have ruined the two pristine days that followed. It was as though the skies had released all of their fury in one go, leaving behind puffy clouds, soft sunshine, and docile winds. Hannah and I took advantage by traversing nearly all of the trails on the northern side of the island, rounding the northernmost Green Point before diving back inland via the Cathedral Woods Trail. The thick trees possessed a remarkable ability to dull the sounds of the ocean, resulting in a diverse hiking experience that highlighted many of Maine’s best features within just a few miles. I am sorry to report that mosquitoes have also found a way across the waves, but they served as a grounding reminder that we must share paradise with other life, no matter how itchy. 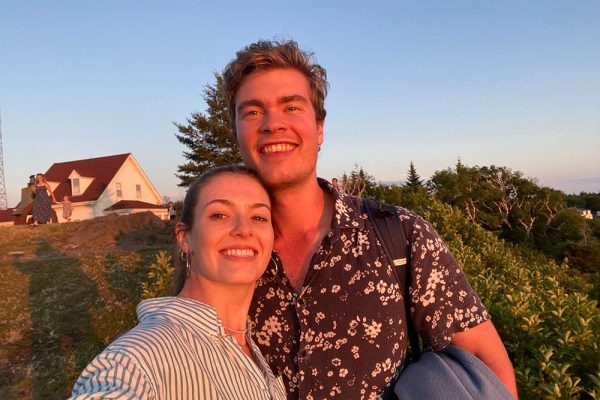 A quick trip back to the village left us full of fish tacos from the Fish House and equipped with provisions from the Monhegan General Store. Fueled up, we struck south to burn off enough calories to justify a trip to the acclaimed brewery later that evening. We stopped at Norton’s Ledge to catch some rays and look out at the unfathomably large horizon just beyond the tragic remains of the D.T. Sheridan on the Lobster Cove Trail. Within minutes we were treated by the sudden appearance of six harbor seals blinking up at us from the surf, taking turns to display their diving talents mere feet from the rocky shore. They left as quickly as they appeared, cutting the aquatic acrobatics presentation short. We dawdled for a few minutes, hoping the seal troupe had just taken a quick break to regroup, and we were rewarded by the triangular figure of a single seal’s nose breaking the surface a bit farther offshore. This little guy was moving at a good clip parallel to the coast, faster than I had imagined based on my earlier observations of the ocean mammals.

But seals bob up and down, right?? They frolic and dive, roll and play, putting on a show for lucky onlookers. They don’t cut through the water like a knife through butter, right???? A dolphin, then? We knew that fortunate ferry-goers occasionally see porpoises and dolphins en route to Monhegan, so it would be perfectly feasible to think that one of the pod animals had broken off and taken a solo journey to the island’s windward side. But no, dolphins breach for air and dive again, and this ocean traveler was staying on a steady and speedy keel just below the surface. These thoughts flashed through my mind in the time it took me to raise my arm and extend my index finger toward the mysterious triangular figure slicing through the rolling waves. Turning to Hannah, I voiced the conglomeration of my thoughts in one monosyllabic utterance: “Shark?!” 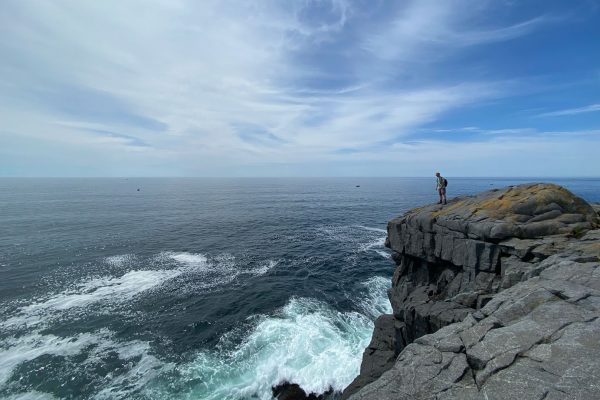 I grabbed my day pack and took off in pursuit. Full-speed scrambling along Maine coastline with gear in tow and one eye on the ocean is generally unadvisable, but I felt this was a worthy exception. If I scraped a knee to see a shark in action for the first time in my illustrious 23 years as a Mainer, so be it. I’d like to say that our athleticism trumped the shark’s, but it didn’t come close. Huffing and panting, we stopped for one last time to squint out at the dorsal fin before it disappeared from sight up the coast. I turned to look at Hannah, mouth open, and saw my expression reflected back at me. Slowly, a grin spread across our faces, and we let out a few good whoops as we mutually recognized the rarity of such an occasion.

A couple of hours later, tripping over our words in excitement, we relayed the sighting to our bed and breakfast host so that the proper folks would be alerted to the shark’s presence. The likelihood that this particular creature would cause any harm was very low, but we wanted to be sure that the potential of danger didn’t go unrecognized. Rising global temperatures and changing ocean conditions caused by climate change have pushed sharks to hunting grounds farther north, likely the reason that this was the first time I had ever encountered one off the coast of Maine. In terms of species, there are a few potential culprits, but a dorsal fin alone was not enough for us to make an identification.

The next day, we ventured back out to Norton’s Ledge, this time via the shady Underhill Trail. The shark sighting from the day before had us itching for more, and we nearly broke into a jog as the ocean came into view. Neither of us voiced our desire to spot the master marine hunter again (it’s a big ocean, and we can’t expect a shark to hang around), but a subliminal excitement held taut between us. Our eyes were keener than before as we scanned the waves for the telltale signs, not willing to chance a missed opportunity. But, as we ambled toward Gull Rock, our surveillance was rewarded only by a few sea birds and lobster boats. Finding a sunny slab, we sat down for a picnic lunch punctuated by the sound of crashing waves and accompanied by Hannah’s watercolor set. 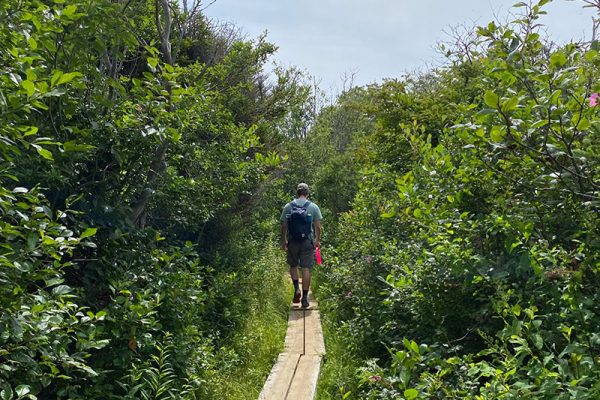 “Shark!!” Hannah called suddenly, jolting me out of a warm stupor and leaving my paltry attempt at an ocean landscape streakier than intended. Could it be?? Will lightning strike twice?? I jumped to my feet and followed Hannah’s gaze to what was undoubtedly another fin sticking out of the water in front of us. My heartrate slowed as I watched the fin flop over, reappearing again in a drunken salute before slapping back into the water. If this was a shark, it wasn’t doing too hot. We scrambled to a higher vantage point to get a good angle, and quickly realized that we were not viewing an apex predator. Instead, we watched the huge ocean sunfish, also known as a common mola, float languidly along the coast with its vast side exposed to the surface like a slightly submerged barn door.

The ferry ride that afternoon to Port Clyde felt almost like stepping through a portal back to reality. Full of ice cream and a host of unforgettable memories, we gritted our teeth and stepped back onto the mainland in preparation for the Monday ahead. Getaways like these remind me not only of Maine’s immense beauty, but also of the privilege I possess in being able to experience remote areas of a state with so much to offer. While Monhegan Island is fairly accessible and ferry tickets are not exorbitantly priced, it is important to recognize that ticket cost and car-only access to ferry ports can be inhibitive to many Maine residents. Investment in the expansion of our transportation systems is needed to ensure that all Mainers and visitors can access the incredible places that make our state great. In my book, Monhegan Island is an absolute gem of Maine and has only further sparked my interest in the hundreds of islands that range along our majestic coast.