Melt, Renewal, and Bogs — Maybe March Has Its Merit

For most of my quarter-century in Maine, March has been my least favorite month. Unpredictable weather conditions, slushy roads, mud everywhere, and hardly a touch of green make for a grueling 31 days as we wait for flowers to poke through. The ski season is coming to a close, the snow is rapidly disappearing, and yet there is always a 50/50 chance that we’ll get slammed by another storm before winter is said and done. The whole month seems like a cruel joke played by Punxsutawney Phil to prove that his shadow does in fact wield power. 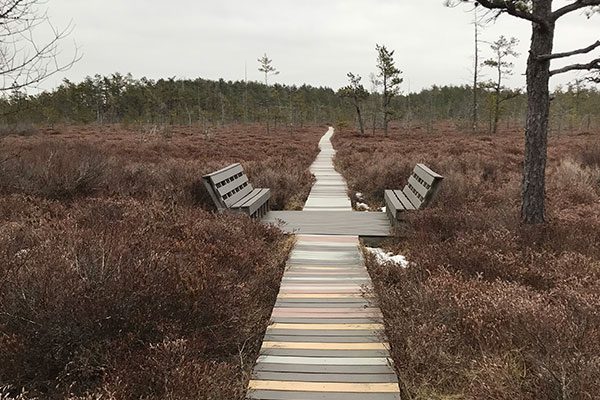 Boardwalk at the Saco Heath, by Josh Caldwell

This year, however, two of my best outdoor adventures came in March. This doesn’t represent full redemption for a month I’ve long considered to be the bane of my existence, but it did help me to realize that adequate preparation and appropriate outing choices can reveal the charm of any season. Perhaps I can’t shred through fluffy glades or eat a handful of fresh-picked wild blueberries on a mountaintop, but I can choose to participate in the process of renewal and watch as the cloak of winter pulls back around me to reveal the pumping veins of the natural world.

The first outing was to the Saco Heath Preserve, the southern-most coalesced dome bog in Maine, protected and maintained by The Nature Conservancy. Home to several rare animals and plants, I’ve enjoyed the Saco Heath over many a summer, helping to repair the beautiful meandering boardwalk or simply watching the slow horror enacted by the carnivorous plants that dapple the bog’s surface. This was my first off-season trip to the Saco Heath, and one derived mostly from the restlessness that March so often produces. My partner Hannah and I needed a quick jaunt to freshen our lungs and shake off the March blues, and we figured a boardwalk was our best bet for avoiding the muck.

Like the month of March, I think that bogs are deeply misunderstood. Often associated with death and decay, we’re accustomed to envisioning unsavory creatures like Golem or Shrek lurking around in the mist, seeking to snatch unsuspecting travelers. In reality, bogs are an essential cornerstone of global ecology and are host to a stunning menagerie of life, some of which can rarely be found elsewhere. The Saco Heath is a shining example, stretching across 1,000 acres and hosting several rare species, including the Atlantic White Cedar, Hessel’s Hairstreak Butterfly, and wild ginger. The peat moss that comprises the bog has accumulated over centuries, storing carbon and purifying groundwater the whole while. Now measuring an average of 12 feet deep, the moss is an incredible carbon resource that continues to provide sanctuary for an impressive array of life. In a delightful twist, mosquitoes are not part of this array as the surface water is too acidic to host their larvae.

Shockingly, every fresh body of still surface water on earth is gradually on its way to becoming a bog through a process known as eutrophication. As organisms live and die in fresh water, nutrients gradually accumulate over time and plants come to dominate the ecosystem. Strolling along the boardwalk as the frozen bog slowly melted around us, it felt as though we were taking a small part in this protracted geologic process, witnessing the earth prepare for the next layer of life that will eventually contribute essential nutrients back to the bog. Patchworks of melting ice containing interlocking strands of frozen grasses and moss made for a lovely mosaic on either side of the colorful boardwalk as we moved with no particular hurry. 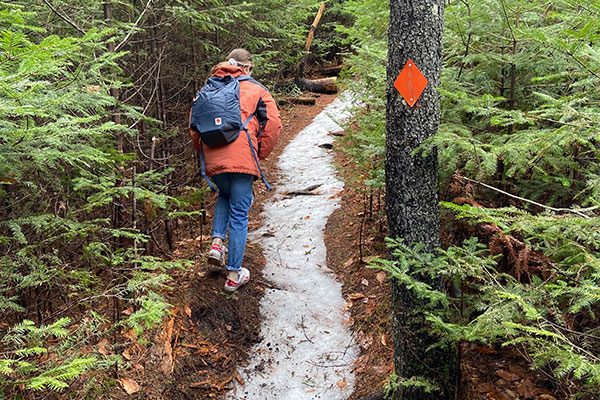 Our next outing, inspired by the first, came on the spring equinox. I’ve always enjoyed the celebration of equinox and solstice as measures of our interstellar travels reflected by seasonal shifts here on the ground. This equinox was particularly exemplary as it began with a chill and gradually reached higher than 50 degrees F over the course of the day thanks to a blue sky and warm sun rays. Hannah and I took advantage by taking a trip to Florida Lake in Freeport, a lovely town-owned property with trails circumnavigating the lake and the surrounding watershed.

On one of only two days in the year when darkness matches light, we moved at the pace of the gradual melt around us. Two loops around the lake allowed us to appreciate the rate of melt in real time, and we watched as small streams and tributaries swelled and the forest floor became increasingly uncovered and spongy. It is a remarkable thing to see life unveiled and renewed after a long period of dormancy, and I felt grateful to have the time to appreciate it fully. An adolescent Bald Eagle soared above, a garter snake basked in a pool of light along the trail, a Great Blue Heron patrolled the shores for groggy amphibians, and Mallards came and went from the spaces around the receding ice.

The maple tree is the perfect epitome of this return to life, with thaw awakening a flow of sap that has been the lifeblood of this region for springs dating back several millennia. The final weekend in March is Maine Maple Weekend, a fitting end to a month that is not always particularly sweet. This tradition grounds me in the reality that each and every seasonal cycle is essential for life to flourish, and my crankiness is simply misplaced.

A lot of my outdoor time is spent on the move, cranking up a mountain on foot, cruising along roadways on a bike, or shooting down a slope on skis. In March, however, I think that the Maine outdoors is best appreciated at a slower pace. The greenery isn’t yet vibrant, the trees aren’t displaying their robust fall colors, the snow is no longer glistening and fresh, but there is a magic to watching life gradually curl its toes and begin to flex its tired muscles.

Josh works to build coalitions that can effectively implement policy by pushing our state and federal legislators to act on climate and clean energy initiatives. . Before coming to NRCM, he worked on the electoral side of politics in order to elect more empathetic, transparent, and environmentally friendly officials.