Exploring Maine’s Beaches in the Offseason

For most people, “beach season” is a very specific time of year in Maine: that luxurious four-month spell of warm weather from June to September when the sun convinces visitors to brave the icy bite of the Gulf of Maine. For some more intrepid recreationists, the off-season holds promise for surfing as winter swells bring gnarlier waves, daring thrill seekers to don their wet suits and test the boundaries of human cold tolerance. For me, Maine beaches are worthy of visitation each and every season, reflecting the changes in the seasons just as dynamically as any other Maine landscape. 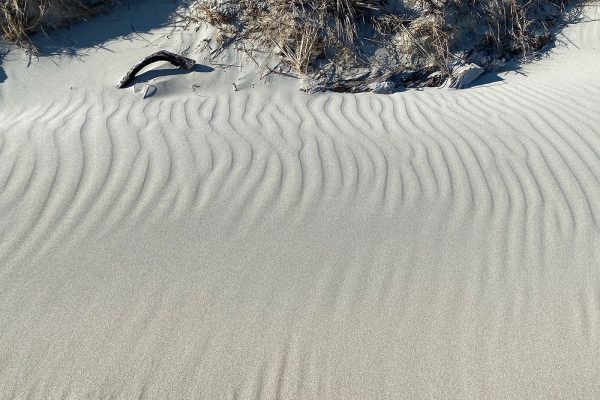 Patterns on the sand at Bates-Morse Mountain Conservation Area. Photo by Josh Caldwell

Two weeks ago, with the frosty nip of winter still in the air, my partner Hannah and I set out for Seawall Beach at the Bates-Morse Mountain Conservation Area. Directly adjacent to Popham Beach, Seawall Beach has always provided more allure for me due to the gorgeous short hike in across the Sprague River Marsh with the opportunity for a vista atop Morse Mountain en route. The offseason is even more compelling given that the parking area is limited for conservation reasons, so a chilly day makes for an open beach. 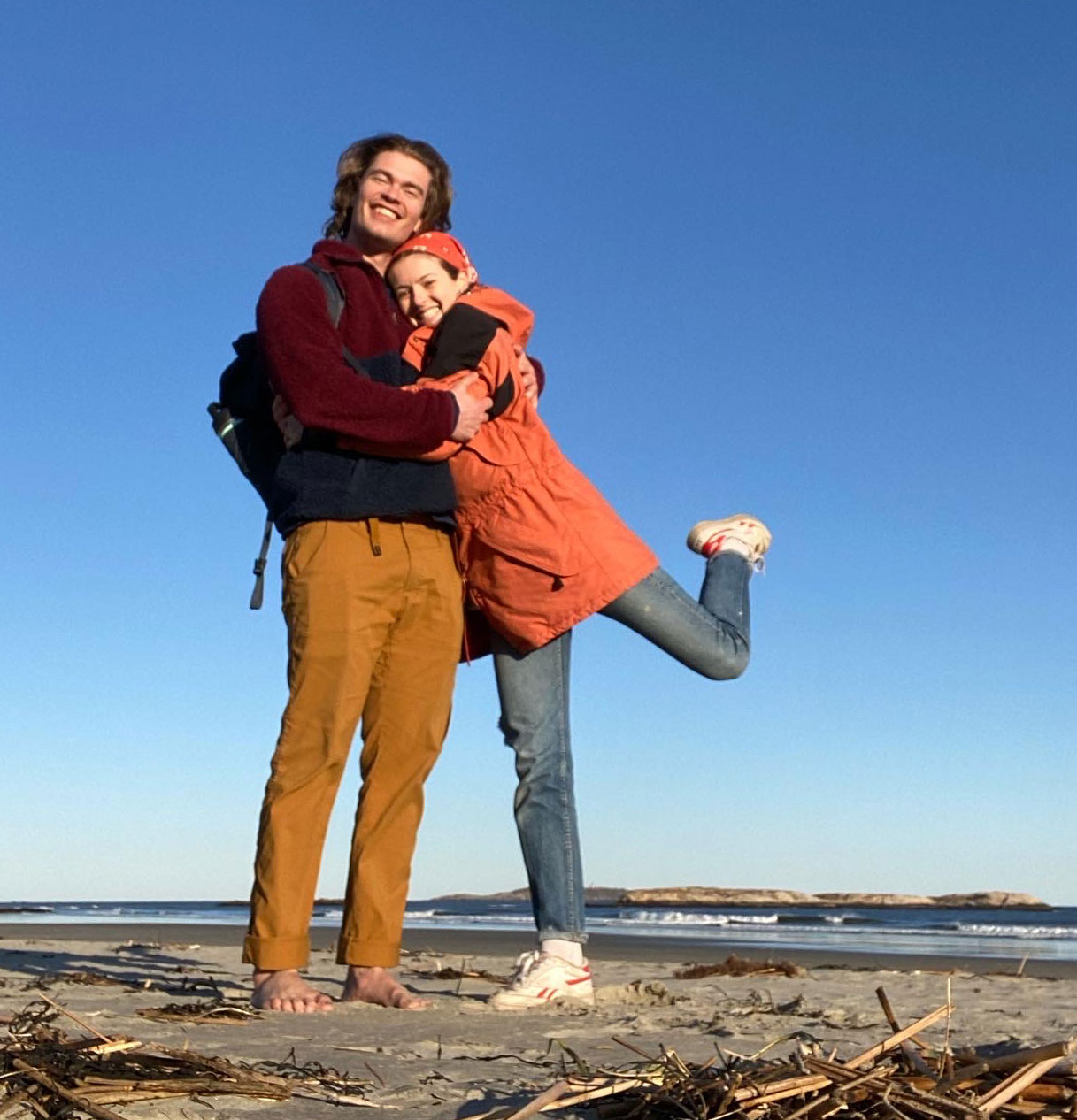 As a Bates alumnus and a geology enthusiast (I minored in the subject, but only in order to prioritize Environmental Studies), the Bates-Morse Mountain Conservation Area has provided unparalleled insights into Maine’s coastal dynamics. The Sprague River Marsh spans more than 600 acres and provides the perfect study location for salt marsh biochemical cycling, carbon sequestration, and sediment transport. Meanwhile the confluence of the Sprague River, the Atlantic Ocean, and Seawall Beach make for a phenomenal model to track beach erosion and deposition over time. Since Bates College purchased the conservation area in 1977, more than 100 publications, theses, and reports have been conducted on the site.

The Bates-Morse Mountain Conservation Area is also an exemplar of effective conservation collaboration, with Bates College, the Small Point Association, The Nature Conservancy, and Maine Audubon working together to preserve critical Maine habitat and study important coastal ecosystems. The endangered Piping Plover has been one of the most prominent beneficiaries of these conservation efforts, seeing a marked comeback in recent years despite remaining below typical levels. With only 2,000 pairs of the small shorebird remaining along the eastern seaboard, Maine’s efforts to protect mating pairs and their offspring are paramount to the survival of the species. Piping Plovers have long been victim to improper beach usage by visitors as their nests are located in the sandy dunes surrounding heavily trafficked Maine beaches. 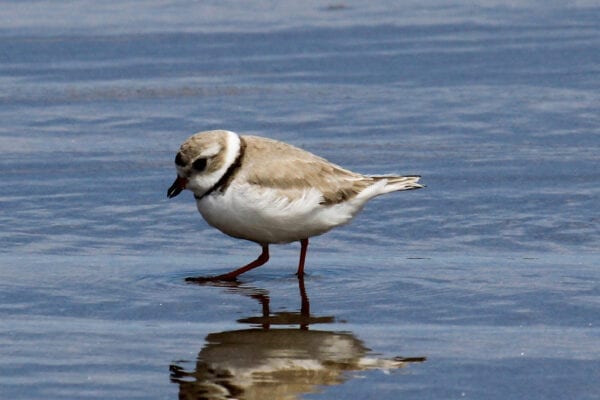 Hannah and I were not lucky enough to catch sight of any plovers, but we were treated by many a gull, a Great Blue Heron, and a cacophony of peepers inhabiting the vernal pools along the trail back to the parking lot. To me, the cheerful song of the peepers has always been the clearest indication that spring has sprung.

There is nothing quite like the feeling of a cool ocean breeze paired with the warm rays of a spring sun. Too cool for delayering, but just warm enough for bare feet—the perfect accompaniment to motion. As Hannah and I strolled, I found myself returning to thoughts of climate change despite my best efforts. With the most recent Intergovernmental Panel on Climate Change Report just having been released and several important climate priorities on our legislative docket, it was hard to escape the knowledge that our prized coastal landscape is changing before our very eyes.

I’ve always been intrigued by the differences between winter and summer beach composition: the high swells in the winter flattening beaches through erosion and amplifying the contrast between dune and beach, while the softer waves in the summer allow for sand deposition, smoothing out the beach and providing a sandy berm for summer lounging. However, as sea levels continue to rise and storm patterns become more erratic due to climate change, the scale is tilting toward erosion. According to Maine’s 2020 “Cost of Doing Nothing” analysis, it is anticipated that Maine’s sea level will rise 1.6 feet by 2050 and 3.9 feet by 2100, resulting in the loss of 42% of dry beach area in the state by 2050 and 75% by 2100. As the name of the study indicates, these circumstances will only arise if we fail to curb our emissions and plan for climate change in the near term. 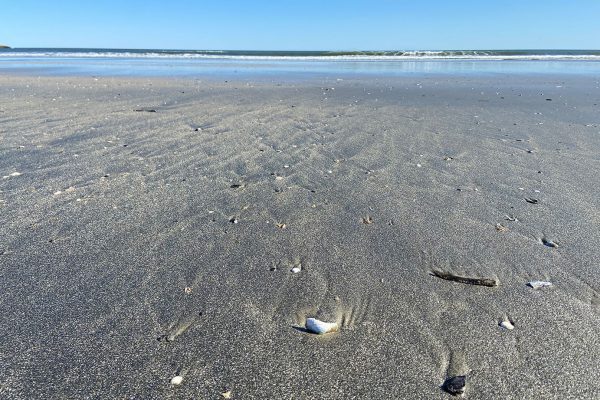 The beach at the Bates-Morse Mountain Conservation Area. Photo by Josh Caldwell

Sea-level rise will also be catastrophic for salt marshes such as the Sprague River Marsh. Marshes are often referred to as the “kidneys of the landscape” for their ability to filter toxins and pollutants, and their carbon sequestration capacity is monumental. As sea levels rise and climate change adds stressors to the ecosystem, salt marshes begin to degrade, releasing stored carbon into the atmosphere and perpetuating global warming. Our actions now will be critical to preventing a cascading effect that would be devastating for coastal and inland ecosystems alike.

I prefer not to think of my visits to places like Bates-Morse Mountain Conservation Area as a “last gasp” to enjoy a fading beauty. Rather, visiting these places reminds me of the immense responsibility we have to change course and protect the living systems around us that enable our existence. It is my hope that the Piping Plover will be one of many coastal species and landscapes to rebound in the coming years as our society increasingly comes to recognition of the value provided by the world around us.