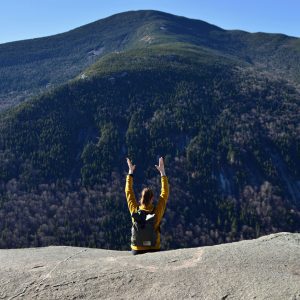 I took advantage of an unseasonably warm November weekend by striking west to Grafton Notch for an out-and-back hike along the Appalachian Trail (AT) to Baldpate Mountain. My partner Hannah and I met our good friend Kylie at the Old Speck Trail parking area after a scenic drive along Route 26, leaving Old Speck behind for another day in favor of the north-bound AT.

We were stripping off layers before we had even picked up steam, grateful for the temperate weather but a bit miffed to be lugging around our hats, gloves, and jackets for the remainder of the hike. The peak of East Baldpate lies just over four miles out from the trailhead, making for a committed hike that still leaves wiggle room for a later departure or an earlier return. An additional 0.7-mile offshoot awarded us our first views of the day atop Table Rock, an aptly named geologic protrusion that warrants caution near the steep edge.

A couple of pleasant hours of huffing, puffing, and chatting led us to the West Baldpate summit. The summit arrived suddenly as we had not yet broken tree line and the dense alpine forest around us cloaked views ahead. If you were setting out to hike West Baldpate alone, I wouldn’t blame you for feeling a touch misled. Though lovely, the summit is anything but bald, and it quickly became evident that East Baldpate carries the true weight of the namesake. We were afforded a view of East Baldpate soon thereafter, and the promise of expansive blank granite nestled at altitude amongst a rippling mountain landscape put some extra pep in our step. 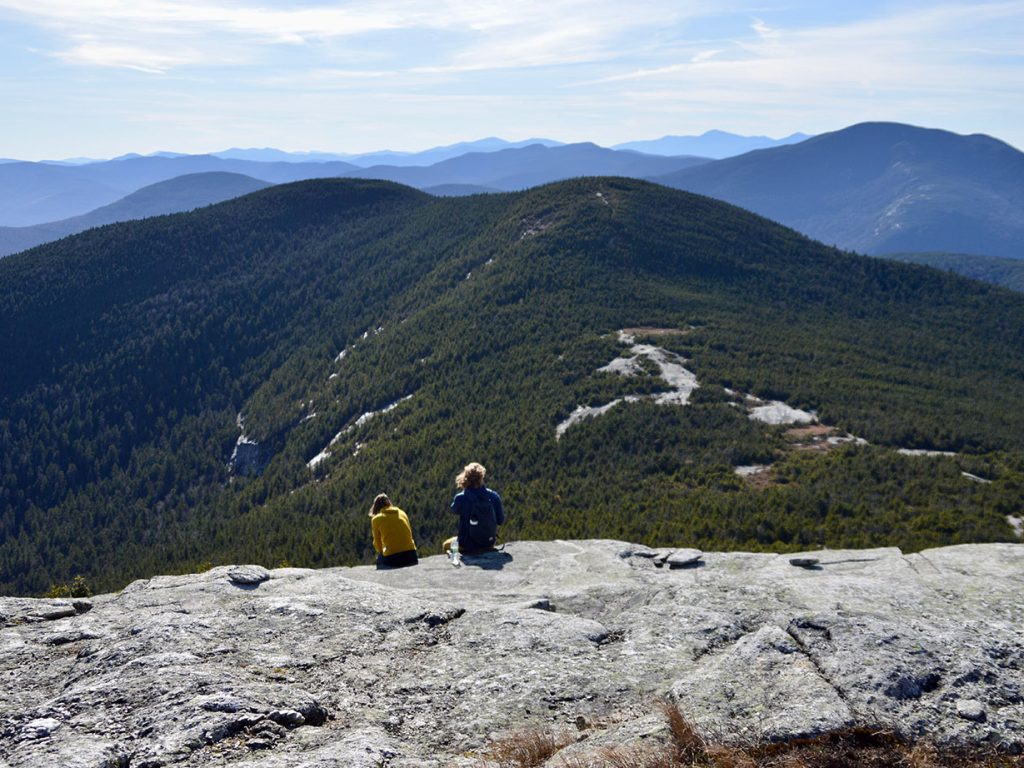 Hannah and me on East Baldpate (photo by Kylie Martin)

Our group of three encountered only one other troop throughout the day and one solo hiker far outstripping our casual pace. As we caught our breath in the saddle between West and East Baldpate following a short but nerve-wracking icy descent (despite warm weather, it is time for ice spikes at altitude!!), a “No way!” from the trail ahead alerted me to the approach of none other than Pete Didisheim, the Senior Director of Advocacy at the Natural Resources Council of Maine. Having already taken in the views from atop East Baldpate, Pete was making his way back to the parking lot with a big grin.

Strangely enough, this was the second time in three weeks that Pete and I had independently chosen to spend our Sundays in the same fashion. Two weeks prior, Pete and I had lapped the Baldface loop just over the border in New Hampshire, missing each other on the trail by only a few minutes.

Turns out, over the past couple of weeks I had been an unwitting participant in Pete’s “Balderdash,” a New England hiking endeavor that scoffs at the more traditional pursuits such as bagging the 4,000-footers by focusing instead on gaining baldtitude on each of the peaks bearing a “Bald” moniker. You may not have known (like me, until last week) that Maine is host to 17 peaks named “Bald Mountain,” which does not even account for the many “bald” variants, including Baldpate, Bald Bluff, Bald Rock, and so on. While this naming convention may not highlight the creativity of Maine’s outdoor community, it does mean a busy hiking schedule for Pete over the coming years. 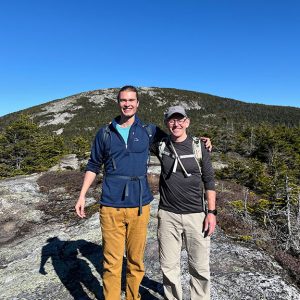 Pete and me on East Baldpate (photo by Hannah Tower)

Pete assured us we were nearly there and set off, leaving us to scramble up the final ascent of the day. As a lifelong Mainer and hiker, I don’t say this lightly: East Baldpate is one of my top five favorite Maine peaks. The saddle between East and West Baldpate is home to several marshes, atypical for this altitude but incredibly scenic. Slabs of exposed granite compose a domed peak that looks like steps made for a giant. A 360-degree view from the summit illuminates the Western Maine foothills and the imposing Presidential Range, with the channeled slopes of Sunday River as an added aesthetic bonus to the East.

Past peak leaf season, we were not greeted by a blanket of color, but rather by a stark, leafless landscape that enabled full appreciation of the naked topography sculpted by eons of water and wind. The sun beat down upon us, providing a beautiful juxtaposition to a world prepared for cold. The granite slabs made for perfect seats, and I can’t imagine a lunch that would have tasted anything but delicious in that moment.

That hike reaffirmed several things. First, the Maine outdoors in every season contains unparalleled beauty. Second, NRCM lives its values, and the people behind this organization are fighting for spaces and people that we all dearly care about. And finally, adventures are the perfect way to reconnect with friends and loved ones, and I am very grateful to adventure in this state with the people I love.