Electric Vehicles a “No Brainer” for Future of Automobiles

“Put your money with your mouth is.”

That’s why I recently bought our first electric vehicle.

In my role as meteorologist at NewsCenter Maine, I’ve become one of the most visible and vocal climate change advocates in the state. Most of my work on climate change involves the science behind it, how we know it’s manmade, and the impacts we’re seeing in the state. But every once and a while I dip into the, “But what can be done about it!?” end of the spectrum.

In that light it just didn’t seem right for my family to have two gas-powered SUVs. Look, they weren’t Hummers or Suburbans or anything; but they were far from a pack of Prius (Priui?).

So, I started poking around for an electric vehicle, and I was set on a Tesla at first. But their lease deals were pricey. I started expanding my search to include the Mustang Mach E, the Hyundai Kona, and finally the Kia Niro EV.

Never heard of the Kia Niro EV? I hadn’t either. It first showed up for me in Car and Driver as they ranked the EVs on the market and declared the Niro “The Sleeper.” The capable, quick EV you’ve never heard of.

I had 3 requirements in an electric car: Range more than 225 miles, quick 0-60 time, and a heat pump. On the latter point I was having a hard time. Many models are including them in 2022 runs, but they weren’t available for 2020-21. I’m sure most of you are familiar with a heat pump in regard to EVs, but if not, the summary is that they go a LONG way in reducing range loss in cold temperatures (know anywhere that gets cold temperatures every once and a while?). The Niro checked all three boxes. So, after some (a lot) of haggling at Bill Dodge Kia, I brought home the Niro for a very reasonable price.

So, what do we think of it so far? Let’s put it this way, it’s the first car we’ve leased where we are immediately WAY over the allotted mileage. 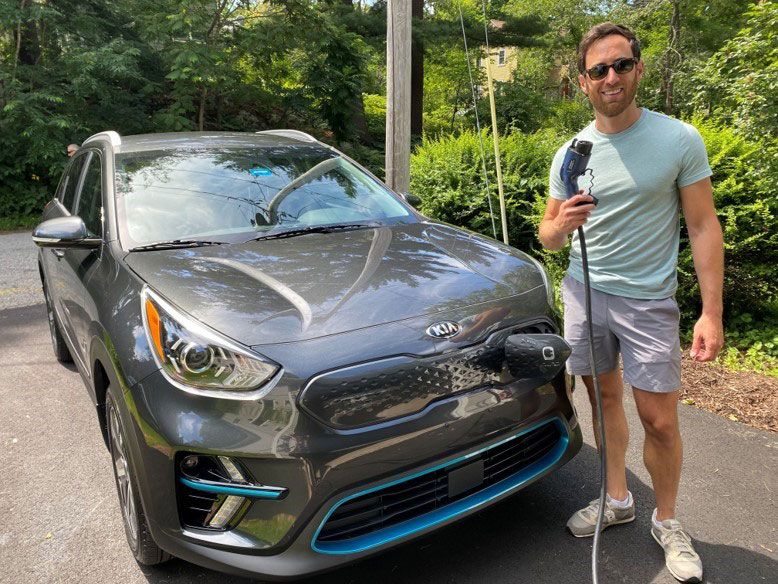 Sure, we are helping the environment, but this car (and cars like it) truly feels like the “no brainer” future of automobiles.

It’s smooth because it has no gears. It’s quiet because it has no engine. It handles well because it’s heavy with a low center of gravity. But personally, the thing that really hooks me on the EV is the INSTANT throttle response.

You can pin the passenger’s head to the headrest from a stop, from 30 mph, from 60 mph. It doesn’t matter. The torque is immediate and something that used to be reserved for truly elite sports cars. But this isn’t that; it’s a Kia. I love seeing the look on people’s faces when this total dad car sling shots around them on the highway in the most effortless way.

I honestly believe this is how we sell the EV to “the masses.” The speed. I’ve let a few friends who weren’t super-hot on the idea of electric cars drive mine, and they all came away believers.

In fact, and this is a blog post for another day, I often tell people, “Take the climate change part out of the equation: This is still the superior technology. Faster, no oil changes, no spark plugs, quiet, ‘fill up’ at home, etc.” 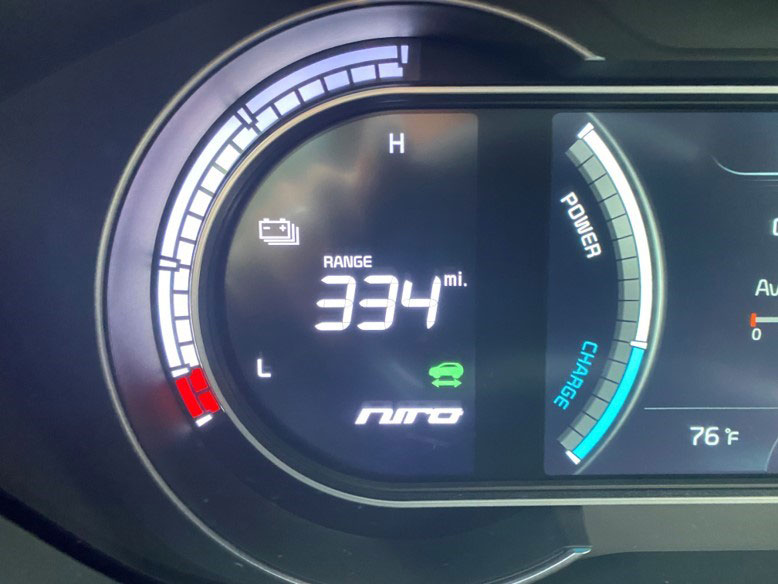 So, what DON’T I like about the EV? Well, most of the negatives are implied, not experienced. For instance, I’ve been getting about 340 miles a charge right now. But the weather is IDEAL. It’s in the 70s, a little AC is needed but not much, the battery is nice and happy. But I know my range will go down significantly in the winter, and that’s a bit of a negative to me. Will I be able to make it to Sugarloaf and back on one charge? TBD.

The other implied negative would be a theoretical road trip into Northern Maine. Charging stations basically don’t exist north of Bangor, and the ones that do are Level II, which means it could take you six to seven hours to charge up. Not exactly practical.

A lot of these negatives will be solved in the next 5 years as battery ranges round out to 500 miles, so I’m not concerned.

One thing I can say for sure: People are genuinely interested in these vehicles. They have a lot of questions that seem obvious to us because we did a lot of research, but are make or break for them:

“How long does it take to charge? I can’t stop for six hours during a road trip.” — Meet DC fast charge.

“Doesn’t your electricity bill go up just as much as gas would cost?” — Nope not even close. I’ve calculated my full charge at $10.50.

I’m really enjoying educating people on electric vehicles. Because as far as I can tell, it’s the only real choice going forward.