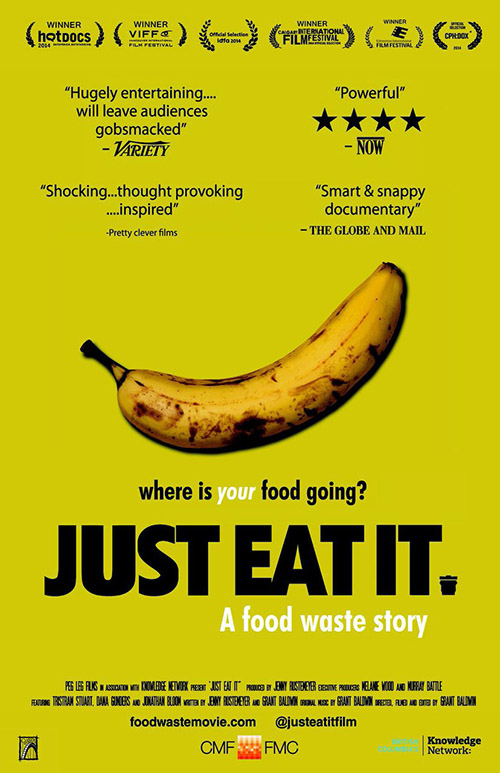 I sat in a darkened room with 150 other people, watching the new documentary, Just Eat It: A Food Waste Story, and realizing that I needed to change. I had offered to help the Natural Resources Council of Maine staff the February screening, which we cosponsored with the Portland Public Library and the local food co-op. I thought that I had a pretty good handle on the issue of food waste. After all, I had worked for the San Francisco-Marin Food Bank in California for nearly a decade and knew how much food could be saved when farmers, grocers, and food programs work together. But one anecdote from the movie really hit home for me:  Americans waste so much food that it’s as if we leave the store with several bags of groceries, drop one bag in the parking lot, and keep on walking. That was me. I was a food waster.

Food is abundant for most Americans. It is for me. I knew that I needed to treat food like it wasn’t abundant if I was to force myself to stop wasting it. That is when I decided to restrict my food purchases to only $10 a week for the next month.

Week one. I did exactly as I should:  I assessed what I had available, checked the store flyer for sales, and planned my meals for the week. I had a locally grown winter squash that was dying a slow death in my basement, a few other vegetables, a bag of rice noodles six months past the “Best By” date, a can of pineapple, a box of chicken stock, some frozen shrimp, and a pack of designer meatballs. I planned to make a Thai curry dish and a sort of sweet and sour meatball dish. For fruit, I would buy a few bananas (the poor man’s energy bar) to augment a small supply of clementines and one of my pantry staples, unsweetened applesauce. Breakfast would be eggs and toast. As a result, my grocery list was short:  bananas, cilantro, green onions, and coffee. I also had a coupon for a dried soup product (free!), for which I had big plans. Total spent week one:  $11.02.

I admit that I was a little tired of my main meals by the end of the week, but I made it to the weekend without any problem. As I entered week two, I knew I had a big advantage—free meals. Yes, I am a freegan. Tuesday was NRCM’s Citizen Action Day, and NRCM activists were joining us for breakfast and lunch as part of the day’s program. I jumped in line with everyone else. Later that week, I headed to northern Maine to visit my mother. I packed food for the five-hour drive there and back and brought a couple of things from my freezer for us to share. Otherwise, Mom and I used my visit as an opportunity to clean out her refrigerator, too. No food waste there.

But back to the meals I did prepare that week. I had another winter squash and the second half of the old rice noodles, a half onion that was hidden behind some juice, some canned vegetables, and what was left of the cilantro and green onions. My grocery list was very short:  eggs, a Maine grown tomato, and a chicken. I repeated my Thai curry dish, this time adding roasted chicken. I used up some dried nuts and fruits to make chicken salad for my trip north. The rest of the chicken went into the freezer for the following week.

I also made a large batch of soup using the Southwestern corn and bean mix I picked up for free the week before. I combined it with the fresh tomato, a can of cream-style corn (what am I, six?), and a can of black beans. But I didn’t stop there. I added a designer corn chowder mix that my brother had given me six Christmases ago. Unfortunately, it spent Christmas Eve in a stocking filled with fragrant soaps and it smelled like freesia. It was the one thing I dreaded eating, but it was the very item I had in mind when I challenged myself to stop wasting food. Fortunately, it no longer smelled of soap. The resulting black bean and corn soup was actually pretty good.

Total spent week two:  $10.40. My lesson for the week? If I can’t use something perishable immediately, freeze it. No matter how small the amount, it is better to freeze it than to let it go bad in the back of the refrigerator. Also, I need to check the top shelf of my pantry when I am planning meals, not just the stuff at eye level.

Week three brought a twist:  A month earlier, I promised not one, but two NRCM colleagues that I would buy Girl Scout cookies from their daughters. I honored my orders, but I wanted to stay true to the spirit of my food waste challenge. So I gave away all but two boxes. (And none went to waste!)

I also had another free meal on my immediate horizon:  the NRCM Board of Directors meeting. Like a seagull, I pounced on the food table and gobbled up the pizza and salad. I realize in hindsight that I wasn’t that hungry. However, I longed for more variety. That was another big lesson for me:  I had used this excuse many times during my evening commute, mentally dismissing my leftovers and stopping at a fast food restaurant instead. Now I pull something “new” from the freezer on Wednesday night to keep my end-of-week lunches and dinners interesting.

Otherwise, I used up the other half of week two’s chicken by making it the centerpiece of my supper (a big salad) and adding it and vegetables to an out-of-code but shelf-stable noodle dish for my lunches. Total for the week:  $9.22, plus $8 even for my Girl Scout cookies.

Week four was the most challenging week. I was headed across the state for a volunteer project at the Eastport Arts Center. I would need a lunch and a supper for the drive there and a lunch for the trip back. Hardboiled eggs, grapes, and bananas were the featured items on that week’s shopping list. I also bought some cheese to help make a frozen bean-and-smoked-sausage casserole more palatable. It had been in my freezer so long that I honestly had no memory of cooking it. Total cost:  $10.04.

While in Eastport, I connected with Sue Crawford and Linda and Bob Godfrey of Save Passamaquoddy Bay. (Our groups are collaborating on a project together—you can read all about it in the next Maine Environment.) We met up at The Commons, a retail shop/collective that Sue and Linda helped to establish. It features beautifully crafted artwork, household items, and knitwear by local artists. As we discussed my trip, I mentioned that I was in the final week of my food waste challenge. Without hesitating, Linda grabbed an item off a display and said:  “You need a Vejibag.” The organic cotton bag is the brainchild of an Eastport woman who manufactures them locally. Just wet the bag and wring it out so that it is lightly damp. Then load it with herbs, lettuce, and other vegetables that tend to go by quickly. It is so simple, but it really works!

So if you are keeping track, I spent a total of $40.68 for groceries over my four-week challenge. Add in the cost of the Girl Scout cookies and I averaged just over $12.00 per week. The result:  Instead of dropping a bag of groceries in the parking lot and walking away, I saved that much food by shopping unloved or out-of-date items from my pantry and freezer. I also reduced my trash by 25 percent. And I lost seven pounds. Best of all, I have renewed my CSA share at a local farm. For the first time in years, I am confident I won’t waste the wonderful fruits and vegetables I get there.