In the breathtaking closing scene of the 2015 documentary, The Messenger, children and adults visiting the Royal Ontario Museum sort and organize thousands of birds that died after flying into windows in Toronto, Canada. The colors, shapes and sizes—of both birds and people—are striking.

I show this film to the Avian Ecology and Conservation class that I teach each fall at the University of New England. Prior to watching the film, at 6:30 a.m., twice a week, for seven weeks, the students and I march into the woods and wetlands near campus in Biddeford to run a fall migration bird banding station. We catch; identify the species, sex and age; measure; and band hundreds of resident and migratory songbirds as they pass through the forest. We catch birds like the Blackpoll Warbler, a songbird that weighs the equivalent of two quarters and flies from the New England coast directly to Venezuela each fall. Non-stop. Holding and studying these birds is a transformative experience, for both their remarkable fragility and their beauty. 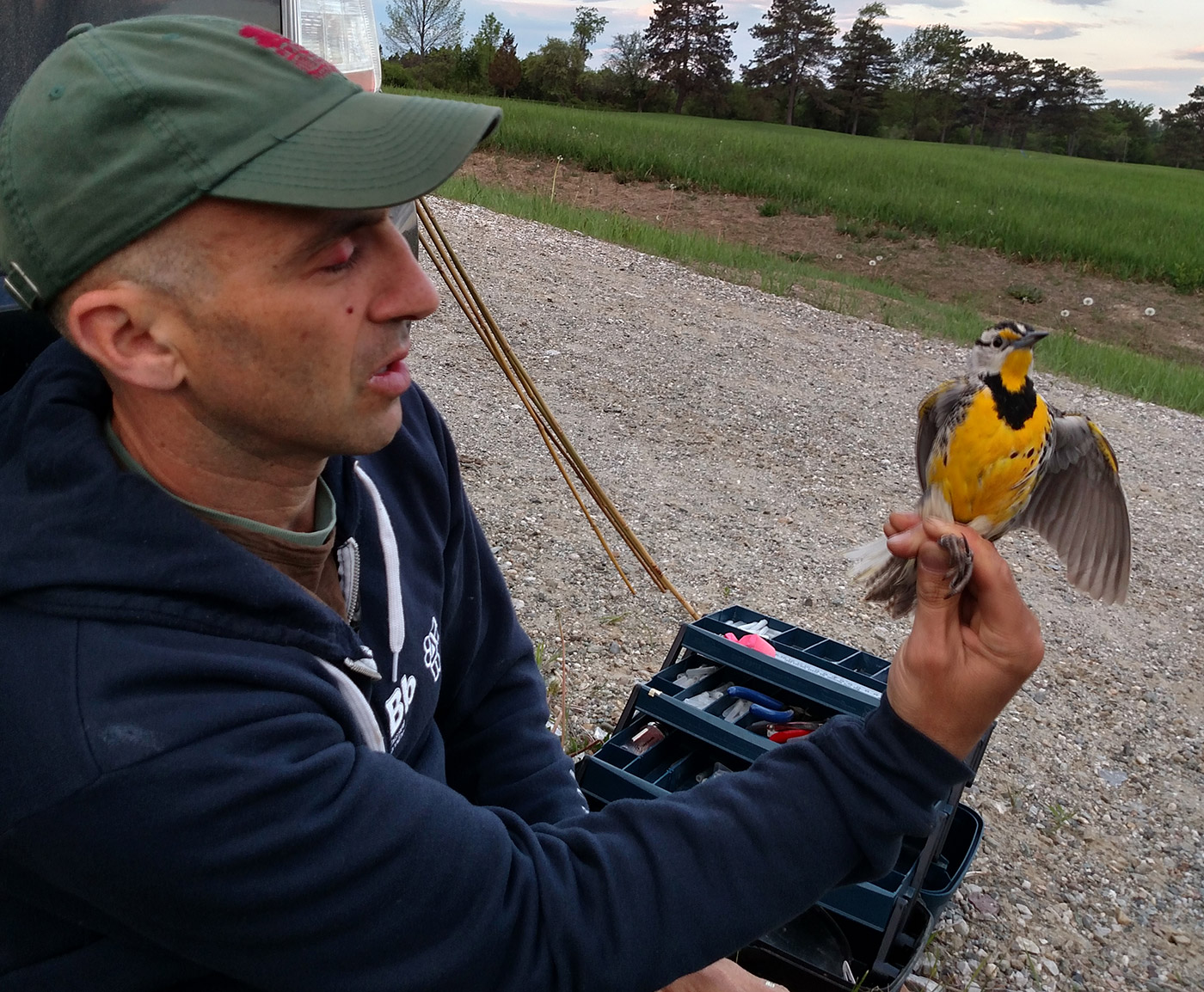 In 2016, shortly before we watched this film, the university released a schematic of a new campus center building (now the Danielle N. Ripich Commons). The beautiful image was defined by the three-story sweeping glass walls overlooking the Saco River and a glass walkway connecting to the nearby Ketchum Library. One of these schematics was lying on a table in our classroom. Adrienne Bowie, a class of 2017 Animal Behavior major, came to our next class full of questions: how will this building impact birds? What can we do to reduce this impact? I advised Adrienne and her classmates that their united voice carried weight and that, with broad support, a thoughtful petition asking for bird-friendly glass might be influential to the university administration.

Adrienne ran with it. In a few weeks, more than 1,300 people had signed her petition. Adrienne and her classmates presented the petition to then-president Danielle Ripich. At the same time, UNE community members, including Lena Moser, a math and science academic support specialist, and the Environmental Council, as well as local community members, including the board of York County Audubon, and Freeport Wild Bird Supply, wrote letters of support.

President Ripich was moved by the thoughtful and well-supported petition and decided bird-friendly glass was the way to go—eventually selecting Ornilux glass.

UNE is not a wealthy institution; we are extremely careful in how we partition our resources. The decision to invest in bird-friendly glass came with significant financial implications and involved cost-cutting in other ways. But the data were clear: in the United States, approximately 600 million birds die annually from collisions with buildings. Our community wanted to minimize the role of the Ripich Commons in this statistic.

We are proud of this building because the bird-friendly glass and its many other sustainable features stand for our values as an institute of higher learning. We are proud that this project is an outcome of community participation, including efforts by students, faculty, staff, and community members and organizations.

Let’s keep the birds where they belong: in our marshes, forests, rivers, oceans, and grasslands and away from our windowpanes.