Why Increasing Housing Opportunities is Good for the Climate

When we picture climate action, we often think of things like solar panels or electric vehicles. Rightly so, since clean energy and electrifying our transportation system are critically important to hitting our climate goals. But climate action goes way beyond wind turbines and charging stations. It includes our food system, how buildings are built, and how we lay out our communities—because our whole economy has been built on the premise of getting nearly all of our energy from fossil fuels. 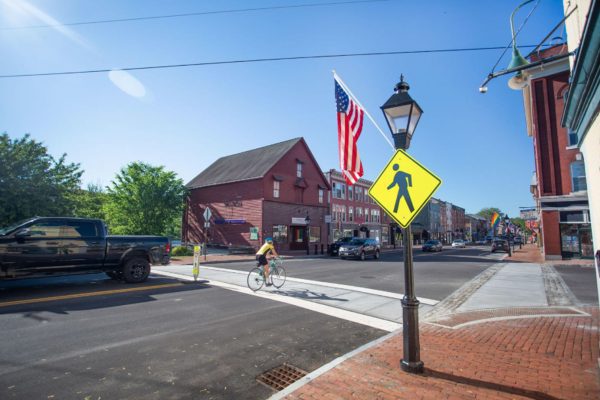 One of the ways to act on climate is to modernize outdated housing and zoning policies that keep Maine people dependent on cars and increase carbon pollution. That’s why, over the past few months, the Natural Resources Council of Maine has been closely following the work of the Maine Legislature’s “Commission to Increase Housing Opportunities in Maine by Studying Zoning and Land Use Restrictions. Many of the recommendations from the Commission’s report are now included in a bill to be considered by lawmakers, LD 2003.

Before we dig into the details, it’s worth taking a step back. Among the many pitfalls unrestrained fossil fuel development and enormous federal subsidies for highway construction enabled was cheap gas and sprawl. As a result, our communities are spread out, expensive, and disconnected.

Maine’s high housing prices are a result of supply not meeting demand, because there aren’t enough homes in places where people want to live. This forces people to move farther away from cities or towns and consequently have to drive more, which also creates more pollution. The median sale price of a home in Maine rose nearly 17% in just the past year. Rents are similar. A report last year from the National Low Income Housing Coalition found that an average renter in Maine would need to make more than $21 per hour to afford a fair market two-bedroom apartment, but Mainers that rent (28% of the population), make less than $13 an hour on average.

Wonk with me while we talk a little bit about the role “exclusionary zoning” plays in reinforcing the lack of affordable housing in places where people want to live. Exclusionary zoning has its roots in racism-tinged housing policies of the 20th century, where some communities instituted land-use and zoning regulations like minimum lot size requirements, single residence per lot requirements, minimum square footage requirements, and other restrictions to keep low-income residents and people of color out of their communities. While it’s rare for the motivations behind preserving these zoning restrictions to be explicitly based on race or socioeconomic class today, the impact is the same. Property owners and those with the means to purchase expensive homes from a limited supply benefit, while others struggle to meet their housing needs. As a housing scholar recently said: “‘Housing costs’ are just ‘property values’ viewed from a different angle.”

Last year, the Maine Legislature created the Commission mentioned above to help address some of these problems. The Commission was chaired by Senator Craig Hickman and House Speaker Ryan Fecteau. Meeting several times throughout last year, they released their recommendations in December, including allowing single-family homes to add an additional living unit (as the city of Bath has recently proposed), allowing small multi-unit construction in residential zones across the state, and providing incentives and resources to communities across the state to make zoning improvements, among others.

These might not seem like climate policies, but if implemented they could have a big impact on successfully meeting our climate action goals and creating healthier communities:

Our work on the climate crisis can’t be limited to renewable energy and electric vehicles, because the contributors to climate change aren’t limited to the energy sector and cars and trucks. Maine’s recently released Clean Transportation Roadmap specifically references the work of the Commission in a section on how to reduce the overall miles we travel in vehicles, and anticipates the Commission’s recommendations for incentivizing housing density in Maine.

We look forward to helping ensure that Maine’s housing and zoning policies help Mainers live healthier lives and enable us to achieve our climate goals, not pose obstacles to them.

Jack brings 15 years of advocacy, policy, and organizing experience to the NRCM climate and clean energy team. Prior to joining NRCM, Jack worked at Greenpeace USA and at Organizing for Action, pushing for ambitious federal climate policies. He served as an appointee in the Obama Administration working on issues ranging from clean energy and green buildings to community resilience and biodefense. Jack has a Master’s degree in Public Administration from the Harvard Kennedy School of Government and a Bachelor’s degree in Ethics, History, and Public Policy from Carnegie Mellon University.