On Tuesday, March 1st, I had the huge privilege of accompanying a group of Freeport Middle School students to NRCM’s Citizen Action Day. These students are part of Freeport Middle School’s Interact Club, one of the eight groups that received an NRCM “Engaging Maine Middle School Students in Protecting the Nature of Maine” grant, and they have been hard at work on their project, which involves designing and implementing a recycling system for their school. It was my first opportunity to meet some of the students involved in these projects, and I could not have been more impressed. They were not only dedicated to their recycling project but to the environment in general, as demonstrated by how excited and engaged they were during Citizen Action Day! 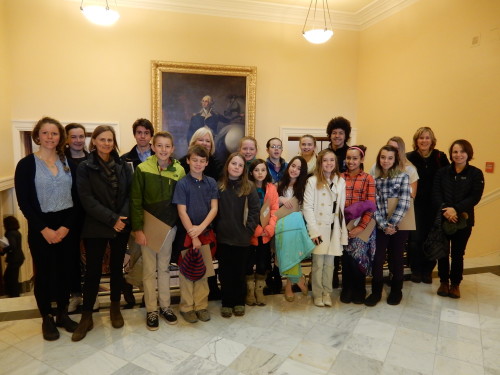 Britta (far left) and the students and staff from Freeport Middle School at the Maine State House on NRCM’s Citizen Action Day on March 1, 2016.

The day began at the NRCM offices, where we learned about some of the key issues currently in the Legislature, most notably a comprehensive solar bill and a bill related to battery waste disposal. The point that stood out for me in these discussions was the idea that our state representatives are just like us. In this way, there is really potential for citizens to influence policy. Since the Freeport Middle School crew has been spending the semester studying energy as well as waste disposal, these students have just as good an understanding of the issues as any legislators, and really have the opportunity to make their voice heard. These students were by far the youngest of those at Citizen Action Day; this unique, fresh perspective makes their influence especially strong.

After this briefing, the Freeport Middle Schoolers and I headed over to the State House. After climbing an incredible number of stairs and getting slightly lost, we found ourselves on the floor where all the representatives and lobbyists were gathered. It was quite the scene, full of lobbyists in suits, House and Senate members, and hundreds of State House selfies. We were able to track down Sara Gideon, the Representative from Freeport, and thank her for her support of the solar bill. For me, it was incredible to experience how tight-knit the Maine community is, and how personal politics can be. Sara greeted some of the students by name and listened closely as they told her about their recycling project and their hopes for a sustainable future for Maine. Following the bustle of the State House floor, we headed in to observe some of the legislative session, which was a whole new kind of organized chaos: multiple people talking at once, whacks of the gavel, pages passing notes, and a wide set of bills being presented and argued for. It was incredible to see the process lawmakers coming to together to make change; legislators trying to influence people and policies is not unlike the Freeport MS students’ goals to change recycling practices at their school!

Despite the long day, the Freeport MS kids still had energy to spare, and after we headed back to the NRCM offices we were lucky enough to be one of the first audiences of the “Recycling Song” that the students have composed as part of their project. It was the perfect way to cap of the day! A huge thank you to everyone involved in making it happen—check out the video below and stay tuned for more updates from Freeport Middle School and the rest of the NRCM Engaging Maine Middle School Students Grant projects!