Four Days on the International AT in the Proposed National Monument

Spectacular views of mountains. Forests stretching to the horizon. Huge trees, gorgeous waterfalls, raspberries and more raspberries—these are some of the highlights of our four-day hike on the International Appalachian Trail (IAT) in the proposed new National Monument along the East Branch of the Penobscot River. East of Baxter State Park, the land is owned by Elliotsville Plantation, Inc. (EPI) and is managed as the Katahdin Woods and Waters Recreation Area. EPI has offered to donate these 87,500 acres to the American people so that President Obama can designate them a National Monument, to be managed by the National Park Service. The land is currently open to the public. I thought I would share with you one of my many experiences on this special lands.

Over the course of four days in early August, my partner and I hiked the IAT from the scenic loop road, in the south of the proposed National Monument to the Haskell gate in the north, a distance of about 28 miles. This gave us time to also hike (without our heavy packs!) three side trips, adding another 6.5 miles. 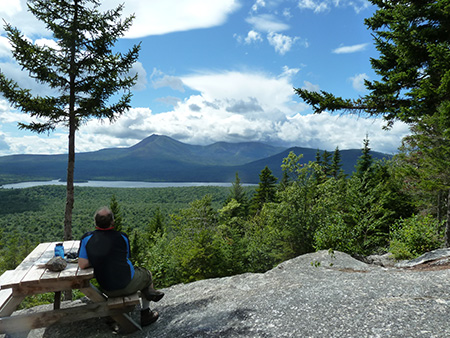 View from the top of Barnard Mountain

Starting at mid-day, we walked along an old logging road lined with perfectly ripe raspberries. That first mile took much longer than it would have in other seasons, and our mouths and hands were raspberry red as we dropped our backpacks and headed up Barnard Mountain with our lunch and water bottles. This side trail, built two years ago by the Maine Conservation Corps, winds up the forested hillside for half an hour, passing through an enormous glacial erratic that has split in two. The trail ends on a spectacular granite slab overlooking Katahdin Lake and the Katahdin massif, one of the best views of Katahdin anywhere! (It’s doable as a half-day hike if you want to re-trace your steps back to the loop road.)

We soaked in the view while we ate lunch, watching a rain shower pass over Katahdin and head south, completely missing us. We headed back down, re-shouldered our backpacks, and continued along the IAT. Before long we came to another side trail leading upstream along Wassataquoik Stream. Dropping our packs again, we started up the trail and immediately came face to face with a very healthy deer who apparently couldn’t believe what she was seeing; she stood frozen, looking at us, for several minutes. 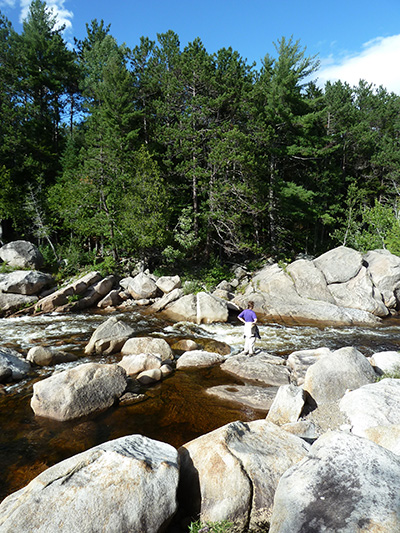 The headwaters of Wassataquoik Stream drop out of the center of Baxter State Park, and the water was running crystal clear. Forty minutes later we arrived at Orin Falls, a long section of the stream filled with giant rounded boulders that create pools, rapids, and falls, and invite summer naps in the sun.

We climbed on the boulders like kids in a playground. We cooled our feet in the water, then headed back down the trail to find a campsite for the night. The Lunksoos lean-to was nearby, but we had a tent and preferred the ambience under an enormous pine by a tributary brook. The clear, shallow brook was just deep enough to cover us, lying prone and washing off the day’s sweat and salt. Later, after dark, we heard splashing footsteps as a moose made its way upstream.

Day 2: Huge Trees and Forests Stretching to the Horizon

The next morning was sunny and warm. After breaking camp, we hiked toward Wassatquoik Stream, now a wide, shallow river. Knowing we must ford it, we had packed water shoes and found dead branches to use as walking sticks. The water felt cool and refreshing; it didn’t rise much above our knees as we carefully picked our way across. No longer on old logging roads, the trail continued along the north bank of the stream, through large, flood plain trees and grasses as tall as we were. On the muddy banks of small tributaries, we saw evidence of moose and deer that had passed by.

After several miles, the trail started up the flanks of Deasey Mountain and the beautiful flood plain trees were replaced by enormous hemlocks. This is some of the most beautiful forest I have seen in Maine. The undergrowth was sparse, having been shaded by the huge hemlocks, but along tiny rivulets every rock was thick and soft with moss. The trail climbed steadily up, the hemlocks eventually giving way to stunted spruce and fir. The trees dotting the rocky summit framed a photogenic view of Katahdin to the west. 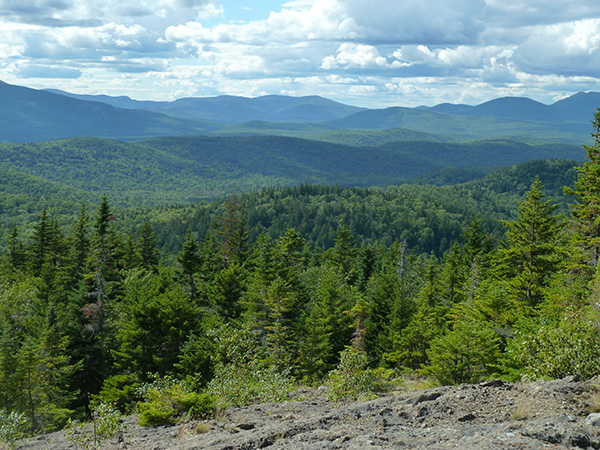 The view from Lunksoos Mountain. Photo by Jon Luoma

But we had miles to go before we slept, so we continued on, descending along a ridge through forest that had not seen a logger’s saw for many, many years. We reached a low saddle and headed up once again, aiming for the summit of Lunksoos Mountain.

Lunksoos summit is far from vehicle roads. A large open area of broken rock on the west side yielded a view of forests and mountains stretching from far south of Katahdin to beyond the Traveller Mountains to the north. Except for the dim remnants of a few distant timber harvests, there was no sign of human activity all the way to the horizon. We lingered for a bit on the summit, enjoying the fruits of our labors, but evening was coming. We headed down, and when we emerged from the tall trees and dark, mossy forest to the late afternoon sunlight, we were near the Lunksoos lean-to.

We set up housekeeping in the lean-to and walked a quarter mile down into the dark forest, carrying bottles and pans, to find a moss-covered stream running high with clear, cold water. After filling our water bottles, we could not resist the draw of the cold water after a hot day filled with lots of elevation gain, and we dunked into a deep pool.

Day 3: Crossing the River and the Grandest of the Falls 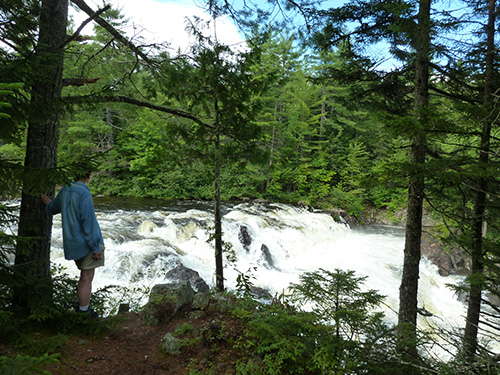 The next morning we made our way quickly down an old logging road lined with raspberries and young forest. After a couple of hours, we joined a timeworn tote road, once a primary through route along the East Branch of the Penobscot River. The forest on either side has grown up here, and the trail was a lovely, shady, and mostly level stroll—quite welcome after the elevation gains and losses of the previous day.

Bowlin Camps is privately owned but is open to the public. There are cabins and a lodge where the owners serve food to their guests, as well as to passing recreationists, including snowmobilers and cross-country skiers in the winter, and hikers in the summer.

We ate sandwiches under a pine on the bank of the river, watching the fast-flowing water below, until a rain shower arrived. This was our excuse to cross the bridge and head for the Bowlin Camps lodge. We treated ourselves to cake and ice cream and sat out the rain among all the stuffed North Woods mammals displayed in the lodge!

Back on the IAT again, we climbed up alongside the river through a lovely stand of immense pines and soon found ourselves at the Grand Pitch lean-to, where we decided to spend the night. After settling in, we went to explore the falls, a short distance away. Canoeists who paddle the river must portage Grand Pitch, the biggest single drop on this stretch of the East Branch, and the volume and power of the water was impressive. We wandered along the portage trail, finding multiple locations for views. 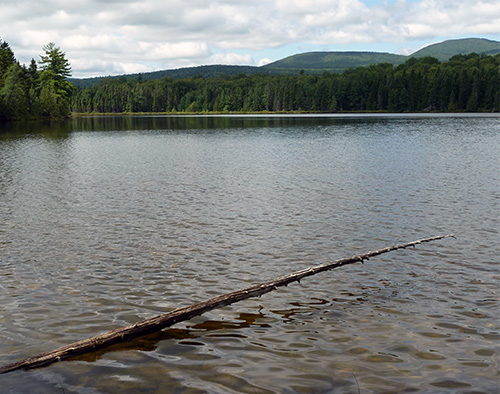 Bidding a final goodbye to Grand Pitch, we headed out the next morning, and soon arrived at the first of four named falls in this stretch of the river, along with long stretches of unnamed rapids. Pond Pitch, like Grand Pitch and other major drops in this stretch, is unrunnable in an open canoe. The benefit to hikers is that each of these falls has a portage trail alongside the river, allowing great views from above, below, and along the drops.

Across from the Pond Pitch portage trail we found a half-mile side trail leading steeply up a hillside through hardwood forest to remote Little Messer Pond. While the best views of the Traveller Mountains to the West from this pond are to be found in the winter, when you can walk onto the ice for unobstructed views, we scouted around the heavily forested shoreline, found some nice views, and spotted a loon on the pond.

Retracing our steps to the main trail and retrieving our backpacks, we continued north and shortly came to perhaps the most photographed falls on the river, Haskell Rock Pitch, named for the unusual 20-foot tall rock pillar in the middle of the river. Once again we explored the shoreline from the convenient portage trail, the pounding of the water as it wound its way around boulder-strewn bends in the river ever present.

After of full morning of exploring the power of the river as it crashed its way down stream, the placid deadwater above Haskell Rock was a serene and welcome sight. The expansive pond is surrounded by marsh grasses and water-tolerant silver maples. We took a swim off a tiny “beach” and ate our lunch sitting on a rock, surrounded by silence, our only companions being an occasional Bald Eagle flying overhead.

Our hike was drawing to a close. We reluctantly rejoined the main trail leading away from the river toward the Haskell gate where (we hoped!) our outfitter had shuttled our car. Our final hour on the trail was filled with more raspberries than we could possibly eat. 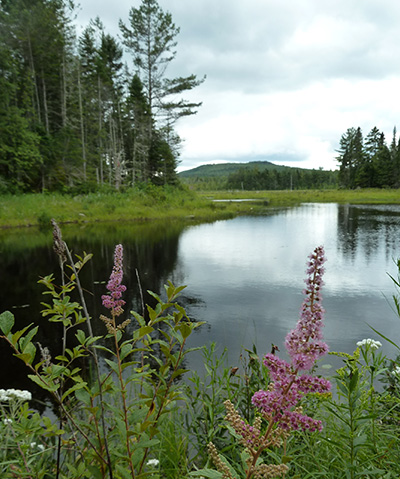 A beautiful pond on the proposed National Monument land. Photo by Jon Luoma

This hike can be done either south to north, as we did, or north to south. There are two useful maps: the Thoreau-Wabanaki Trail map and guide, with an excellent map on one side and mile-by-mile description of the river on the back (produced by Maine Woods Forever, published by the University of Maine Press); and Katahdin Woods and Waters Recreation Area map. For more information, contact Susan and Mark Adams,  EPI Recreation Managers, Lunksoos Base Camp, 527 Sebois Road, T3R7. Or at lunksoos@gmail.com or (207) 852-1291.