This legislative session, a bill (LD 1639) that would close Maine’s out-of-state waste loophole is gaining momentum. You see, Maine’s State-owned Juniper Ridge Landfill (JRL) was never supposed to accept out-of-state waste, and there is no good reason why it should. The State purchased the landfill to provide disposal capacity for Mainers’ waste, not the rest of New England. 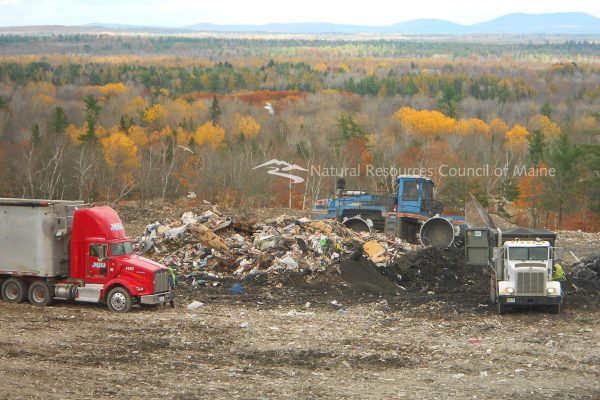 Yet, for years two companies—Casella Waste Systems, that operates the JRL for the State, and a waste processing facility called ReSource that is owned by a New York-based private investment firm—have been in cahoots to use a loophole in the law to ship in thousands of tons of construction and demolition debris (CDD) from out of state and disguise it as waste generated in Maine so that it can be dumped here.

Here’s how the loophole works.

ReSource is paid by the ton to take in construction waste from across New England. About 90% of this waste comes from out of state, and the company only recycles about 10% of it on a good day. Under the loophole, the remaining waste is classified as in-state waste—because it is now “leftovers” from a Maine facility.  So now, this out-state-waste in disguise can be sent to JRL as either Oversized Bulky Waste—which are things like appliances and couches—or as “CDD fines,” which is just crushed-up construction materials. ReSource pays Casella by the ton to dump these wastes at JRL, but the cost it pays for disposal is only a fraction of what the company makes from accepting the waste in the first place. This is how the company makes its money.

LD 1639 would close the out-of-state waste loophole and ensure that only waste actually generated in Maine is disposed of at JRL. Now that the bill has passed out of committee with a bipartisan 10-3 vote and the loophole has been exposed, Casella and ReSource are back on their heels and spreading myths to confuse legislators and the public.

Here is the truth about the false claims these companies are making:

Myth #1: Casella needs the crushed-up construction material made by ReSource to cover the landfill each day, and no suitable environmentally friendly alternatives exist.

The Truth: There are several greener options that Casella could use to cover the landfill. These options are just less lucrative, so the company is ignoring them. According to landfill experts, the most sustainable option is to use a retractable tarp. This saves on landfill capacity and can better prevent water from entering the landfill, which is what creates leachate (toxic garbage juice). Casella can also use any soil-like material, which is readily available in Maine. Experts also say that the construction material Casella is currently using is only appropriate in very arid regions due to its contribution to hydrogen sulfide gas production. This means the current practice is actually environmentally harmful when done in Maine.

The Truth: According to experts, it’s uncommon to use Oversized Bulky Waste to stabilize sludge in a landfill. More common options include using sawdust or contaminated soils—materials Casella could easily obtain. The most sustainable way to manage the sludge is to dewater or dry the sludge to the point where it does not need to be stabilized by other waste in the first place. This practice also reduces greenhouse gas emissions from the landfill.

Myth #3: The Legislature is changing the rules of the game, and ReSource will close its doors if the loophole is closed.

The Truth: This is a common scare tactic used by companies who put profit over the best interests of people and the environment. The ReSource facility in Lewiston has been in operation since 1985, and it has changed how it does business many times over the years. There’s no reason the company can’t do it again to better reflect Maine’s environmental values (as every other waste facility in Maine has done). The company is owned by a 70-billion-dollar global asset management company, and it has the resources to invest in more innovative and responsible ways of doing business in Lewiston while protecting the six full-time and dozens of temporary jobs it provides.

Myth #4: It doesn’t matter where the waste goes, our State-owned landfill is the best place for it.

The Truth: It does matter. JRL was purchased by the State of Maine to provide a lasting and secure place to handle the waste generated in Maine, by Maine people, for years to come. Because of this loophole, roughly one-third of all the waste buried at JRL originated from outside of Maine. This means the landfill is filling up quicker than expected and needs to constantly be expanded. At its current fill rate, a new expansion is anticipated in only six years.

The practice of dumping out-of-state waste at JRL has a direct impact on those who live in the shadow of the landfill, including the tribal members of the Penobscot Nation, who are concerned about the air they breathe, the water they drink, odors, pollution, truck traffic, and property values. The United States has a disturbing legacy of putting landfills and other polluting facilities in underrepresented and marginalized areas, and it should not be acceptable to continue to do this in Maine

The objections to LD 1639 are based solely on the financial interests of two companies. Any argument they make against a new law that will protect and preserve the capacity of Maine’s only State-owned landfill should be suspect and carefully scrutinized by lawmakers.

Disposal of out-of-state waste at Maine’s State-owned landfill is harming Maine’s ability to manage our own waste into the future and threatening the health and quality of life of Maine people. This is why the Natural Resources Council of Maine and Conservation Law Foundation are working together with Community Action Works, Maine residents in the Don’t Waste Maine group, and other partners to close the out-of-state waste loophole.

We need to be forward-thinking and sustainably managing our own waste. That includes preserving the capacity of Maine’s State-owned landfill for the people of Maine, as it was intended.

Sarah is a waste policy expert and leads NRCM’s efforts to reduce waste and litter, encourage reuse, and increase recycling and composting in Maine. Prior to joining NRCM, she spent several years working to improve recycling programs in rural communities. She earned a master’s degree from the Bren School of Environmental Science and Management at the University of California Santa Barbara, where she specialized in environmental policy, and has a bachelor’s degree from the University of New Hampshire in Environmental & Resource Economics.