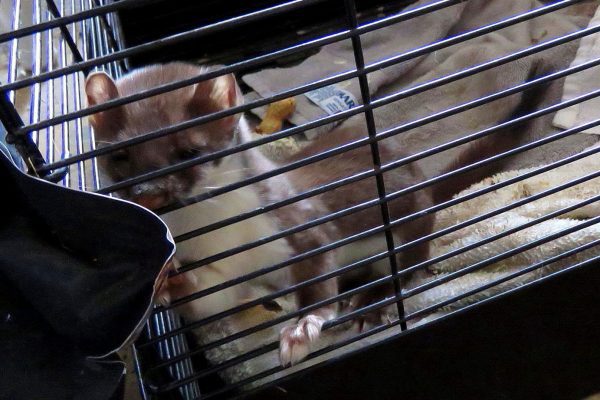 A weasel recently rehabilitated and released back into the wild by Don Cote. Photo by Jayne Winters

You never know what you’ll find in Don Cote’s living room at the Duck Pond Wildlife Rehab Center. When I visited him a few weeks ago to decide on a topic for this month’s article, and as soon as I walked in, I knew what it would be: weasels. I’ve never seen one in the wild and feel fortunate to have arrived at Duck Pond the same day Don had one that had been captured locally.

My first question to Don was if “weasel” and “ermine” were the same critter, and he confirmed they are. The body fur changes (molts) from tan with white belly in the summer to white in the winter to provide camouflage during the change of seasons; it sports a black-tipped tail year-round. The molts are controlled by hormones that respond to the hours of daylight.

The two most common types of weasels in Maine are the long-tailed, which can grow to 11-22 inches long with a tail of 3-7 inches, and the short-tailed, which is typically 7-14 inches long with a tail of 2-4 inches. The jury is still out on whether we also have a population of the least weasel, which, as the name suggests, is the smallest, at 7-9 inches including tail, which does not have the black tip. Weasels are slender animals, with stubby legs and short, round ears, only weighing three to eight ounces as adults. They are relatively shy and mostly nocturnal, although they will forage during the day. Their diet mainly consists of mice, voles, shrews, rats, frogs, and insects, but they are also known to kill squirrels, small rabbits, worms, snakes, and birds, and also feed on eggs. A weasel will eat up to two-thirds of its body weight every day due to its high metabolism (heart rates can exceed 400 beats per minute) and minimal body fat.

They live in underground burrows, often around stone walls, brush piles, and old foundations for denning. Weasels are solitary except during mating season and when raising young; they are not monogamous, and females care for the pups alone. The female weasel, called a “jill,” will have a litter of four to ten pups in April or May after a nine-month gestation period. After nursing for a few weeks, the pups are fully independent by autumn. Their life span is only four to five years. Despite their ability to reach speeds up to eight miles an hour, jump to heights of six feet, and put up a good fight with their sharp teeth, they fall prey to raptors, fox and larger mammals. Unfortunately, domestic dogs and cats are also a threat to these wild, native animals. In addition, weasels are subject to Maine’s two-month trapping season.

And the weasel at Duck Pond? Don stated he usually gets only one or two a year to rehab. This one had been caught accidentally by a homeowner who was trying to trap squirrels. Upon examination, Don noticed one of its eyes looked infected, so after three days of treatment (always a two-person job!), it was released back into the wild.

Don continues to keep admissions and long-term residents at a limited number by transferring many rescued critters to other rehabbers who have generously offered to assist in their care. Please check these websites to see if there is a rehabber closer to you to help keep critter care at Duck Pond more manageable: www.mainevetmed.org/wildlife-rehabilitation or www.maine.gov/ifw/fish-wildlife/wildlife/living-with-wildlife/orphaned-injured-wildlife/index.html. Donald Cote operates Duck Pond Wildlife Care Center on Rte. 3 in Vassalboro. It is a nonprofit, state-permitted rehab facility supported by his own resources & outside donations. Mailing address: 1787 North Belfast Ave., Vassalboro ME 04989 TEL: (207) 445-4326. Please note that their former email address is not being monitored at this time.