This month’s column about the Wildlife Care Center in Vassalboro was going to be about fox releases, but before we got too far into the conversation, caretaker Don Cote mentioned he had three bobcat kittens on site. I “pounced” on the idea of writing about the bobcats, so we’ll address critter releases later.

In late June, a homeowner in the Augusta/Hallowell area called the Center to report that three small bobcat kittens were hanging around his yard, with no sight of mom. Don successfully caught two kittens with baited traps; the third youngster was coaxed out of its hiding place under the bushes into a large net by the homeowner and his son, then transferred to a trap for transportation. Don thought they were about four weeks old and explained that when something happens to a mother bobcat, the kittens usually stay together and, after a few days, venture out of the den in search of food. The new residents at Duck Pond Rehab are currently eating well on a menu of milk and canned dog or cat food, twice a day. 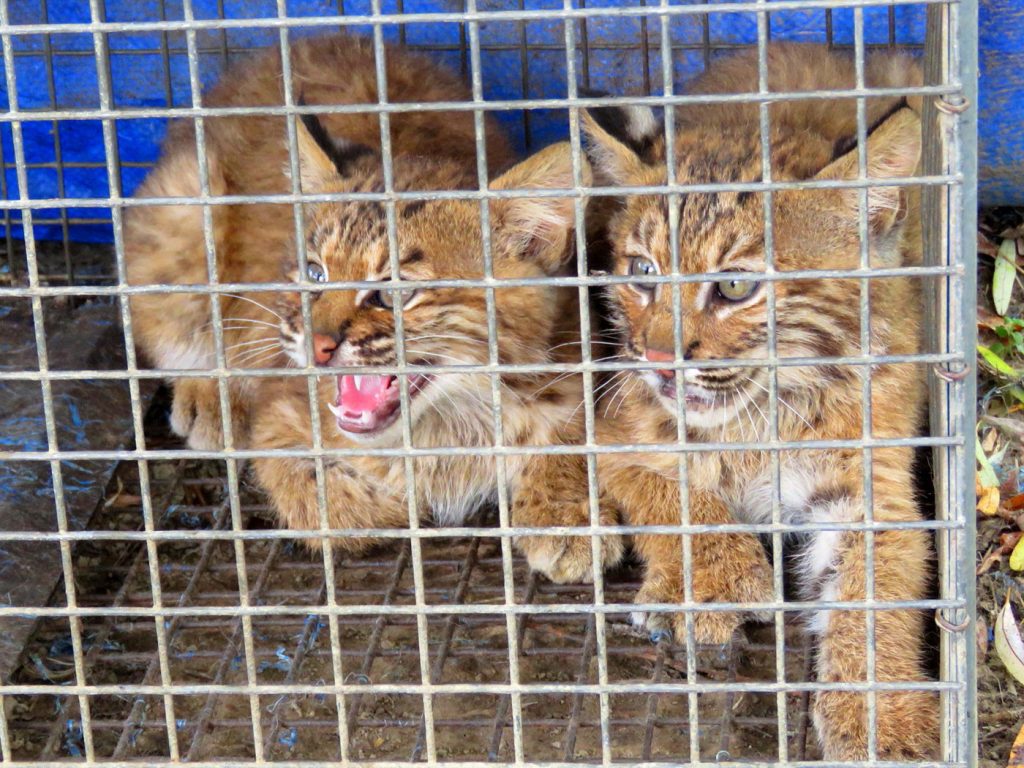 The bobcats are very protective of each other. Photo by Jayne Winters

I was surprised to learn that wild cats can get canine parvo. As noted in an earlier column, parvo is a common and highly contagious disease (especially in young animals) that is difficult to control as the virus can survive through the cold winter months. With the help of Jeff, a volunteer at Duck Pond (he met the Cotes when he brought them baby chickadees for rehabilitation about six years ago), the three kittens have received their two parvo vaccinations and are thriving. Despite wearing heavy gloves, Jeff told me two of the three kittens successfully bit through the material! 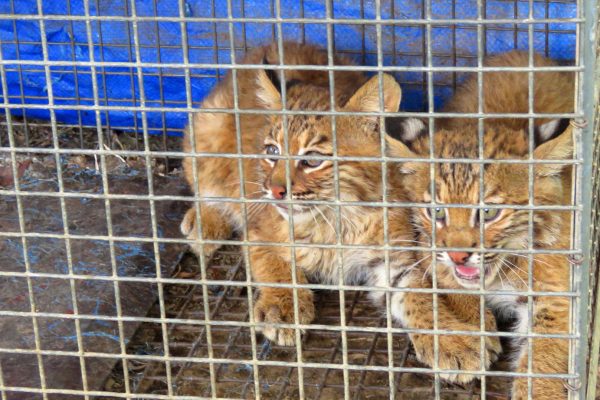 From posts I’ve seen on Facebook and the news, it seems there have been frequent bobcat sightings recently. According to the Maine Department of Inland Fisheries & Wildlife (IF&W) website, it’s thought populations began expanding north in the 1980s. As with many other species, survival in severe winters can be a struggle; unlike lynx, bobcats have fairly small feet, so deep snow reduces their ability to catch prey. Maine IF&W considers them to be a stable species, classified as “Least Concern.” Again, as with other wildlife, threats to their population include loss of habitat, deforestation, vehicle collisions, hunting, and trapping.

Bobcats play an important role in nature’s ecosystem by regulating rodent populations, which unfortunately increases their exposure to rat poison. Food sources are varied and, in addition to small rodents, include mammals, insects, reptiles, birds, and carrion. They hunt primarily by sight and sound, and once prey is located, stalk until they’re close enough to make a quick dash and attack. I found it interesting that in dim light, bobcats can see up to six times better than humans; they have more rods and cones in their eyes, allowing for better vision in the dark and as with most felines, have an elliptical eye shape with larger corneas, which allows more light to enter the eye.

Bobcats can be found in agricultural areas or dense woods — wherever there are rocky ledges, hollow trees, or large brush/log piles for shelter and denning sites to raise their young. They’re usually solitary animals, other than a brief time in February and March for courtship and mating. The female has a litter of one to five kittens in May; young cats leave the family as early as eight months, but often stay with their mother for a year. And yes, they can breed with other felines: there are records of male bobcats mating with female domestic cats, as well as breeding between bobcats and lynx. 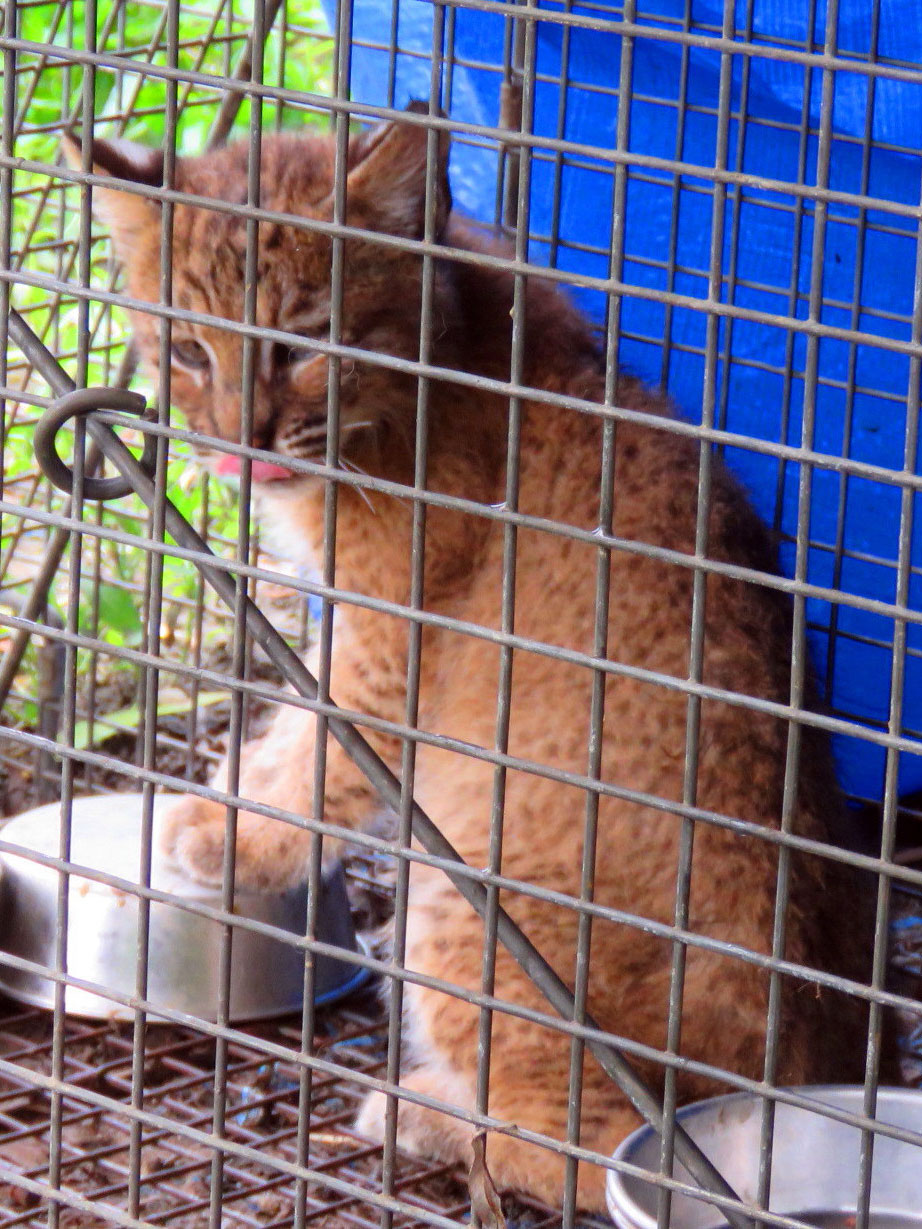 The average life expectancy is three to four years, but they have been known to live up to 12 years in the wild. Few predators other than fisher and humans are able to kill an adult bobcat, although they may receive serious or even fatal injuries from prey animals. Young cats are sometimes killed by eagles, owls, coyotes, foxes, bears, and adult male bobcats.

Adult males weigh 20-30 pounds and average three feet in length; females are quite a bit smaller. Their fur is various shades of tan and brown, with dark brown or black stripes and spots over the body. They have short ear tufts and hair on the sides of the head give the appearance of sideburns. Often confused with a lynx, the tail is the best point of comparison: the tip of a bobcat’s tail is black on top and white beneath; a lynx’s tail is completely black-tipped. In addition, the feet of a bobcat are noticeably smaller than those of a lynx, they have shorter ear tufts, and a less uniform coat color.